First ever overseas trip with Kim and Natalie!!! It was so so so much fun and I love Bali cos it's just so chill and beautiful and of course affordable as well AND THEIR VEGAN MOVEMENT IS AMAZING!! The number of vegan/vegetarian cafes, restaurants and markets are insane and the food was always amazing! It was also so easy to find vegan options at non-vegan places :) 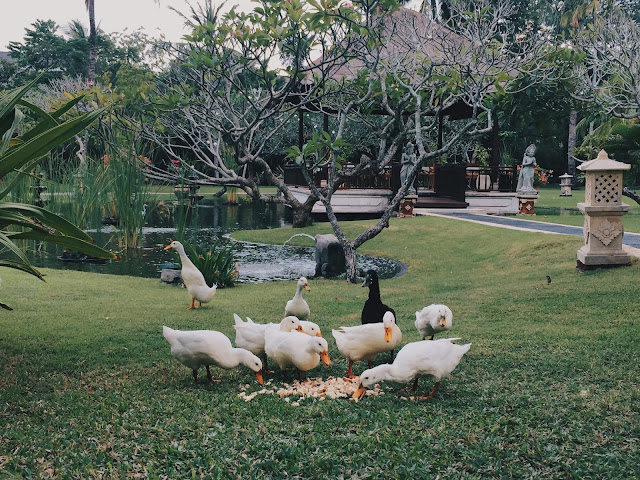 The ducks at breakfast were absolutely adorable! They would run up to the bread in a line and then waddle back to the pond in a line as well and their quacks were so funny 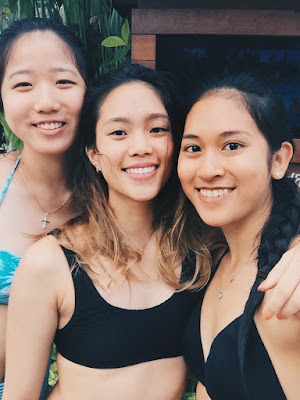 We went to Water Bomb the first morning we were there!! Water bomb was BOMB. Wish we had time to stay longer! Rides were so fun and exhilarating, the place was so clean and high tech as well because you carried an electronic band round your wrist where you'd put money in and that became your wallet - so advanced! And it was already like that 15 years ago :) I got stuck in a slide which was pretty scary but I guess it was a cool experience as well and what was the best was that they had a vegan ice cream stand called Mad Pops (which we later found out that many of the other vegan cafes we visited sold them as well in little ice cream coolers). They had insane flavours like key lime pie, vegan brownie chocolate fudge, coconut coffee and salted caramel?!?! Basically any ice cream but the vegan version and they managed to make it so creamy as well!! KUDOS TO YOU MAD POPS 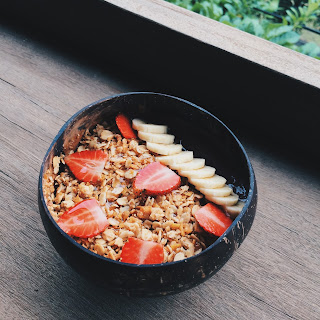 After water bomb, mum picked us up and we headed to Nalu Bowls for a late lunch. Coincidentally, there was another vegan-friendly cafe located right above Nalu bowls called Shelter, and the food was soooo good!! I'm so glad Shelter was there cos Nalu Bowls had limited seating and I was craving solid food after all that water activity in the morning 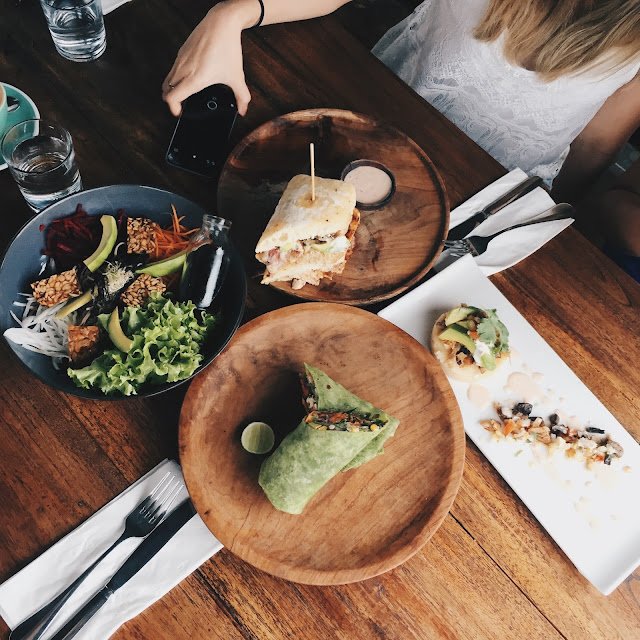 Had an acai bowl to share which was yummy and icy and then I had a breakfast burrito (filled with veggies and scrambled tofu), Mum had a tempeh salad, Kim had a beef sandwich and Natalie had some sort of a pulled jackfruit pork with mash kind of dish but all the food was really yum!! The atmosphere at the cafe was really calming as well with pots of plants hanging from the ceiling and we faced a football field with locals playing there :) 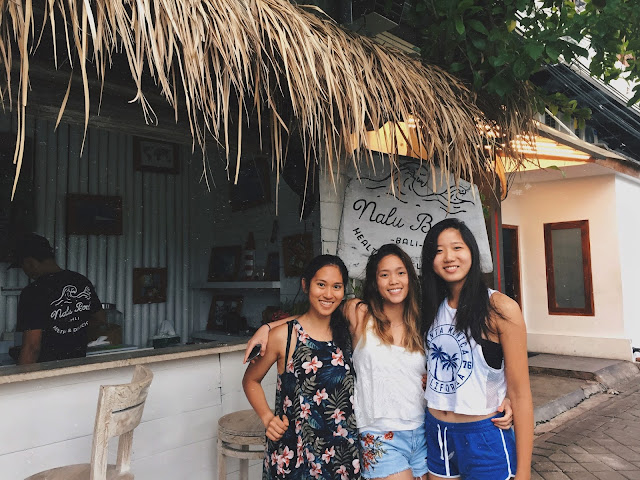 After that filling meal, we went for a full body massage (so relaxingg.....) and went to Bali Collection just to look around and get some food

The next day, we had breakfast and enjoyed a little episode of live nat geo that morning with action from a monitor lizard and a heron. After that, we headed to Peleton Supershop - an entirely vegan cafe!! 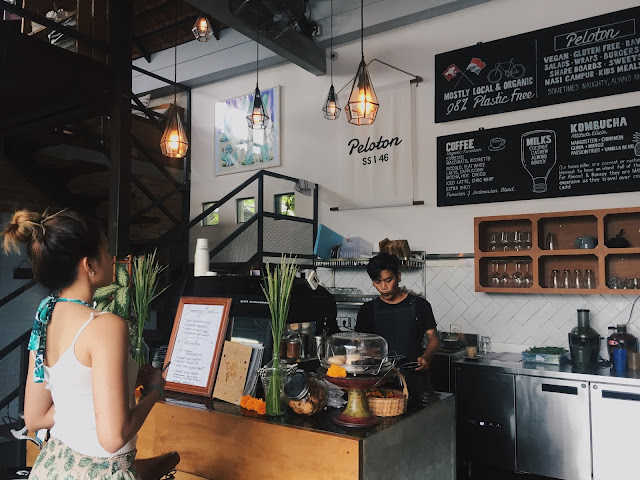 It was so aesthetically pleasing :')))) 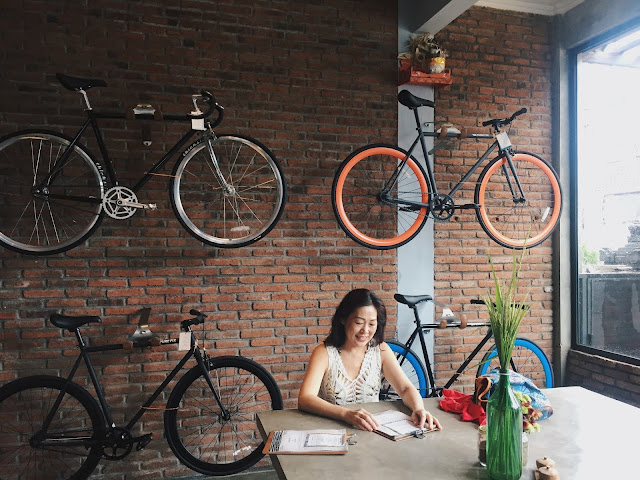 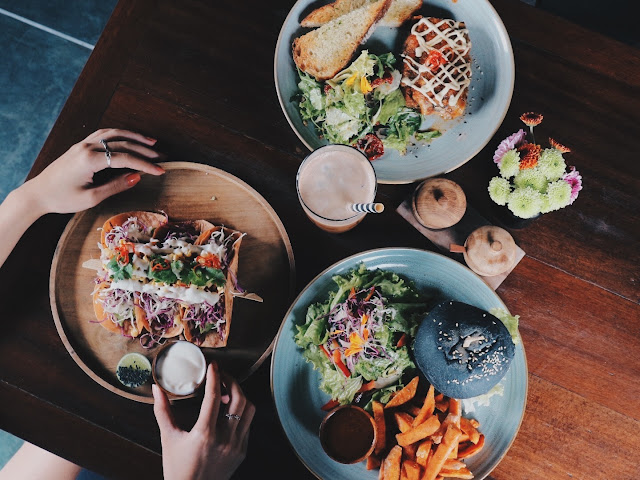 Mum, Natalie, Kim and I shared a Tricken Schnitzel burger (which I honestly thought tasted like the meat version of it), BBQ Jackfruit Tacos and a Lasagne. We had a chocolate mocha with cocowhip as a drink and also ended the already amazing meal with THE BEST BANOFFEE I'VE EVER HAD IN MY LIFE and a Pecan pie which was amazing as well (but the Banoffee was better). It was really insanely good! It was chilled and not too overpoweringly sweet, the crust was light and crumbly and the filling was just soft and gooey and banana-y and the cocowhip layer on top just complemented everything perfectly!! 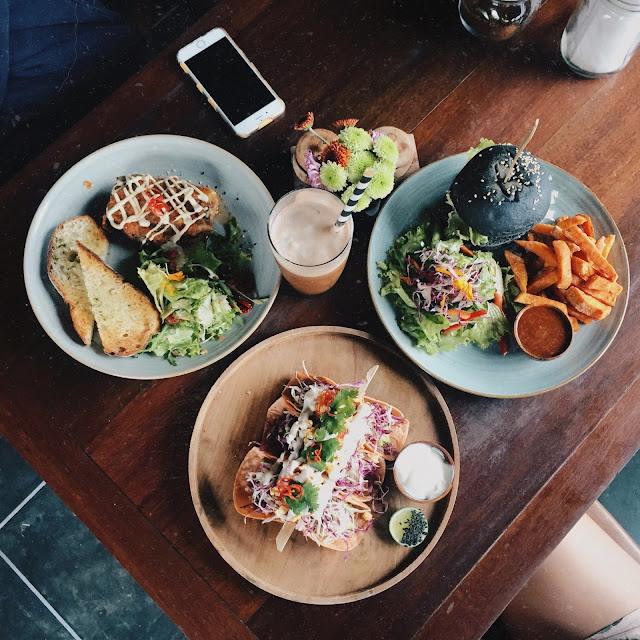 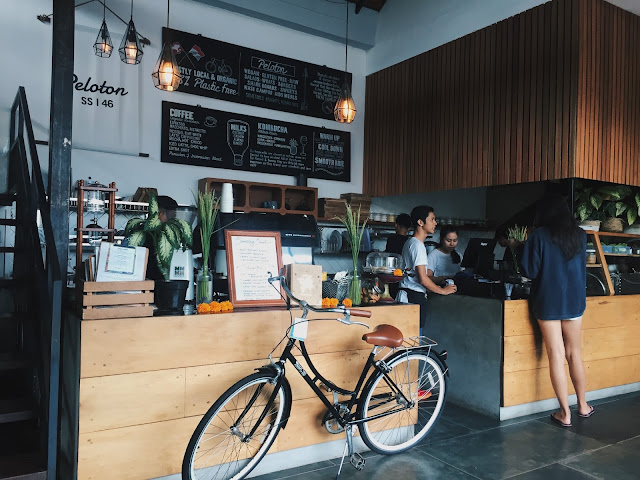 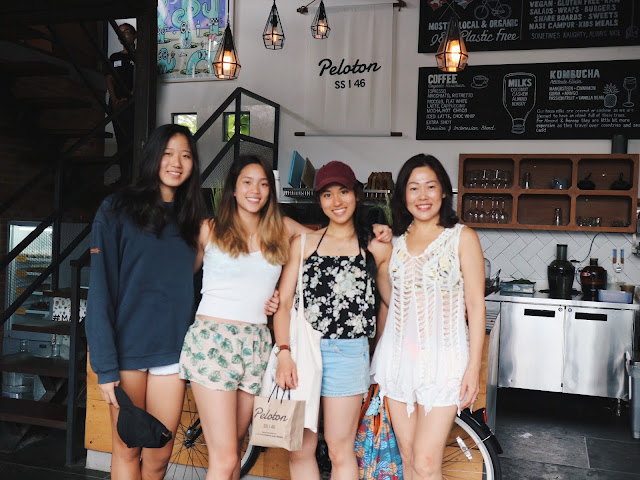 After stuffing ourselves with delicious vegan food, we drove for an hour and a half to Kuta to go surfing with Odyssey surf school! Didn't really think it was that much of a difference paying more to do it with a certified school rather than to just hire a board and an instructor from the many 'stalls' along the entire stretch of Kuta beach. But it was really good nonetheless and they taught us the basics and were always there to help us whenever we needed it and the instructor's command of English was really good 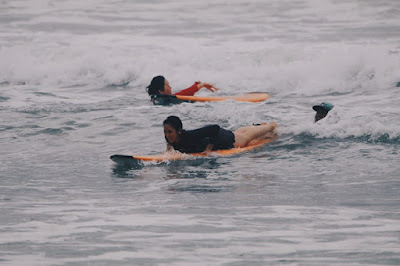 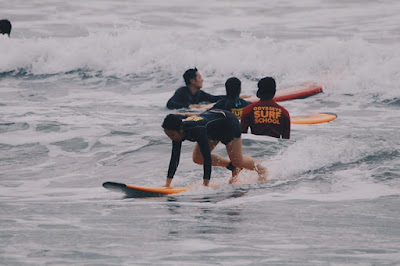 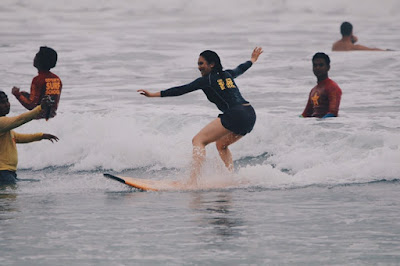 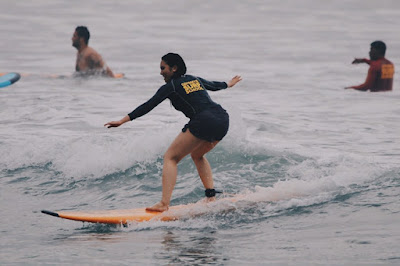 I think I only had a 50% success rate hahah the waves can really seem so intimidating at times and these weren't waves that were THAT big. I really can't imagine facing a tsunami :'( Despite the salt water burning the back of my throat and occasionally my eyes, surfing was an incredible amount of fun!! 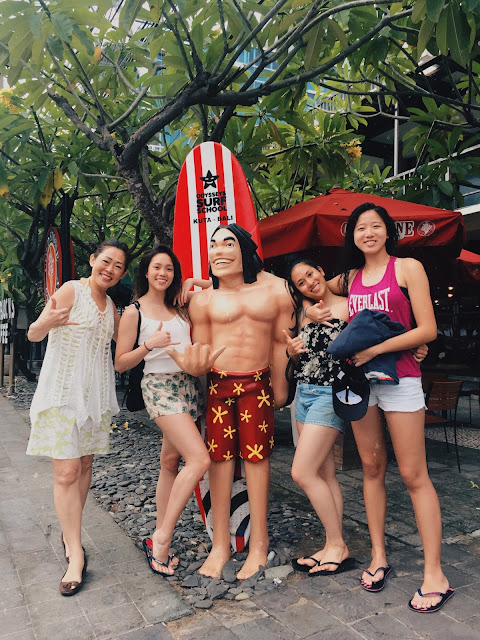 After surfing, we walked over to Hard Rock Hotel where Dad used to work at for 7 years and our family actually lived there for 2 years (before coming to Singapore for pri school) and then spent our December holidays there every year after (during pri school). It was so nice going back to a place where I spent so much of my childhood at and just reminiscing the good ol' days where Justina and I literally just ate, swam and lived in the kids club everyday. Mum and I also met many of the staff who knew us back then who were still working in the hotel and that was nice!! Though to be honest I could not remember some of them, it was still nice hahah (the trick is to just smile and nod) 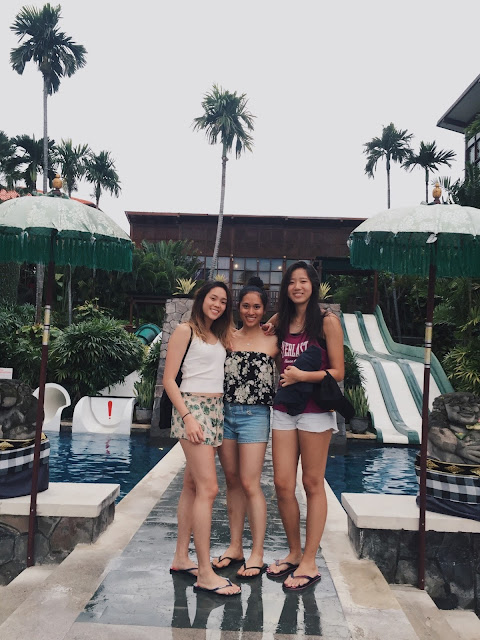 After a quick trip to the past, we had dinner at Made Warung and I had a delicious Gado Gado (which means mix-mix and consists of a variety of vegetables, tofu and tempeh in a yummy peanut sauce), stuffed tofu and brown rice :))) Kim, Natalie and I then went for a foot reflex and a manicure - the worse manicure ever. oh wells. and then headed back to the hotel for a good night's rest!

The next morning (14/6), Natalie was feeling unwell ☹ and so Kim and I headed to White water rafting in Ubud without her :( 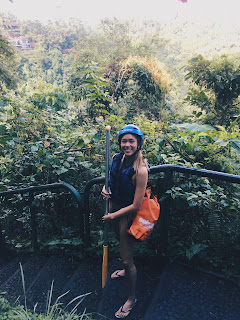 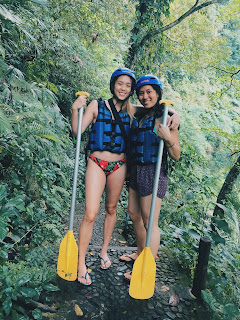 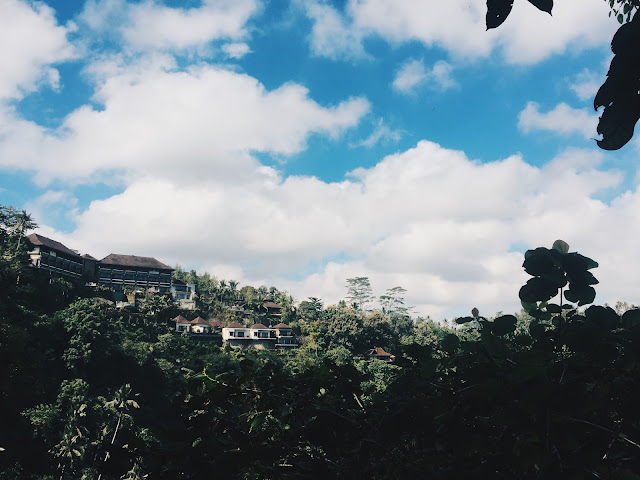 It was so scenic and beautiful!! Though the water level was pretty low and hence the rapids were not very intense, it was still pretty fun and exciting and some bits :) 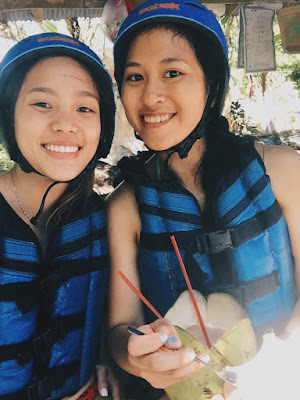 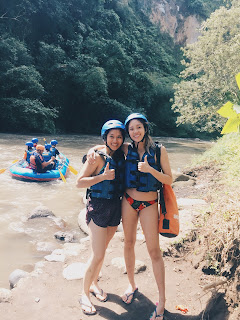 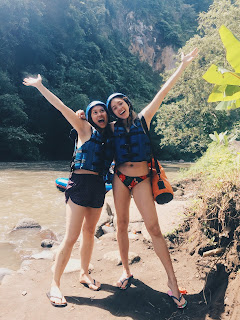 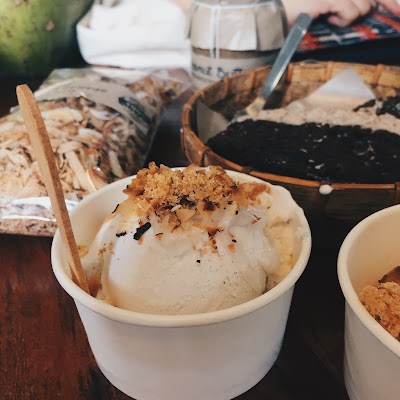 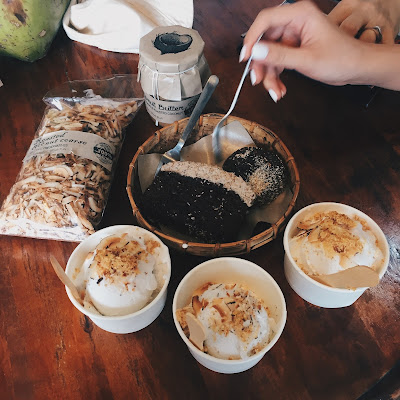 After rafting, Kim and I visited Mum's montessori school in Ubud and we had lunch there and then headed out onto the busy market and food streets! We popped into Tukies where the large coconut ice cream sign drew us in and later found out that it was opened by a vegan and they had offered a lot more vegan options! Kim and I bought coconut jam (can't wait to try it!!) and I bought coconut chips and we also shared a chocolate banana cake slice and a date roll and bought some date energy balls as well :)

Kim and I then practiced our bargaining skills at the craft market and we both got coconut bowls YAYYYY and matching spoons!! My bargaining skills are so bad and just going round the different stalls selling the same items makes me so anxious because I don't know what is cheap and what is not and I don't like bargaining because I feel they are already earning so little :'( But Mum said: " At the end of the day, you pay what you're willing to pay and that's all" which I really like!! Because regardless of whether one shop would sell it cheaper or not, the price that you paid for is what you were willing to pay in that moment and so there's no point wondering if you could've got it at a lower price at the stall next door! This advice only came after a hilarious bargaining experience that Kim had that still makes me laugh now as I type it out - ok so basically, she bargained for a pretty shell dish from 160,000 for one to 160,000 for 2 and probably felt like a champ after, and we literally walked across the aisle to the next store and Kim decided to ask how much a similar shell dish cost and the guy said 30,000 HAHHAHA OH WELLS it's all a learning experience now isn't it!! 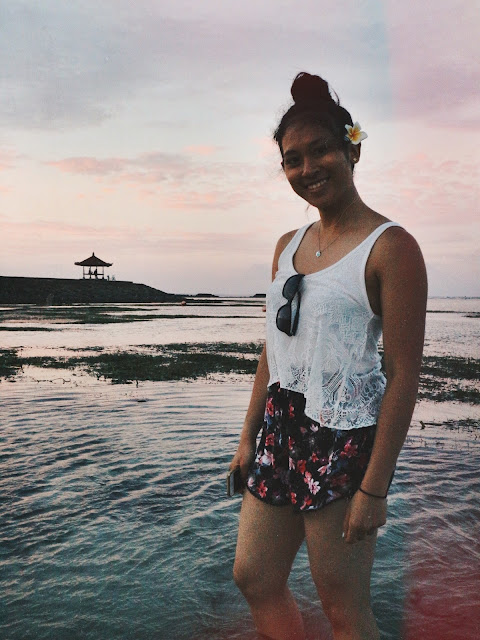 Headed back to the hotel after that and Natalie was feeling much better and so we headed out to catch the sunset at the beach! 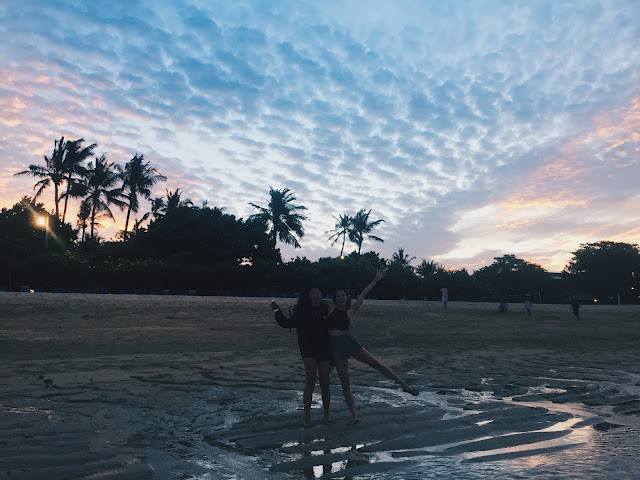 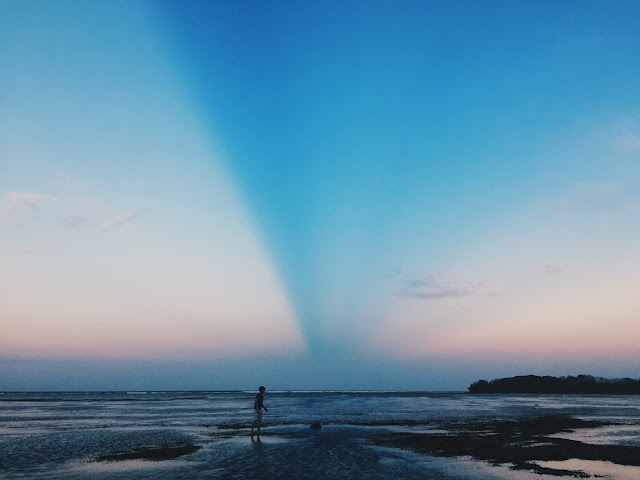 How cool is that streak of light in the sky! 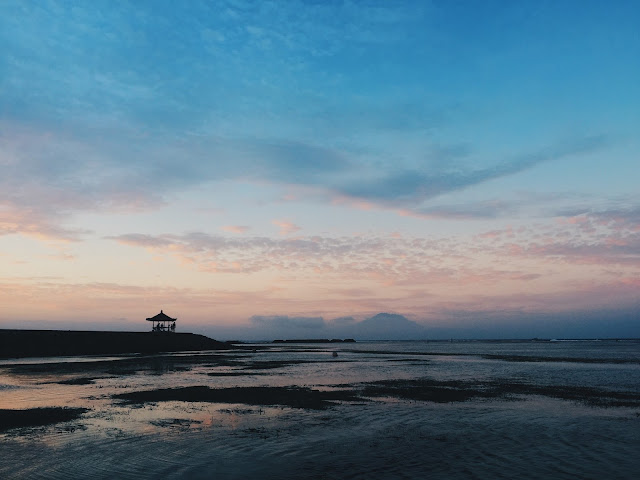 You can see the silhouette of a mountain in the distance :')