Today was the day we hiked up the Taktsang Monastery aka the Tiger's Nest! This majestic monastery hugs the side of a rocky cliff 2950m above sea level and is said to be the holiest site in Bhutan. Climbing the Tiger's Nest is one of the must-dos in Bhutan despite how challenging it is. We started off at the base at around 8:30am and we could see the Tiger's Nest miles away, perched on the cliff. Looking at how high it was and thinking of how many hours and steps it'll take to reach this monastery made me go ' Well, here goes nothing!', before we embarked on our steep hike. (There is also an option to sit on a horse, but it would only bring you up to the halfway point, and at the base there were about 50 horses with their necks tied to a tree and they were the most depressed looking horses I've ever seen :( It was heartbreaking!!) 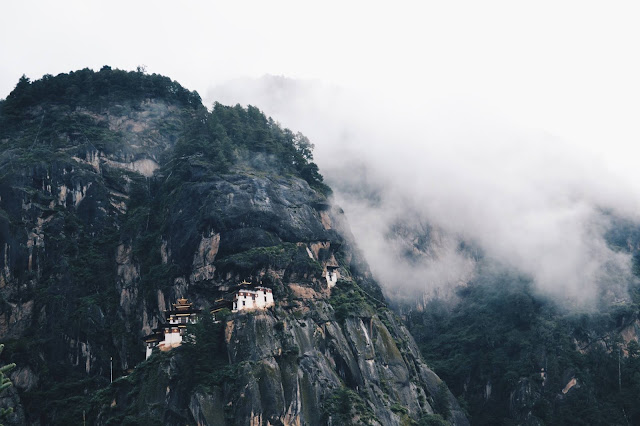 View of the Tiger's Nest from the base 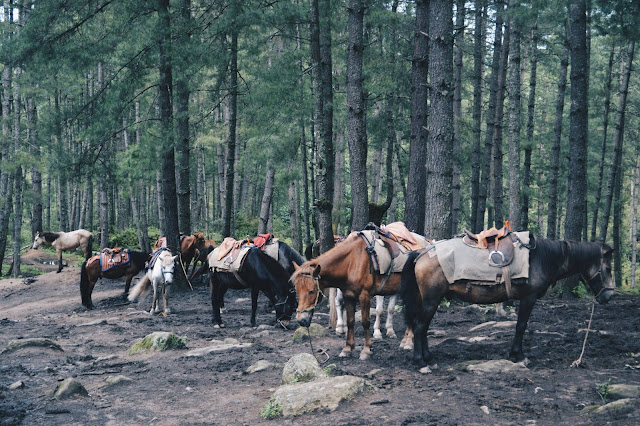 I underestimated how steep the climb was and just 20 minutes into the hike and I could feel the back of my legs working and I was panting!  Justina, Mum, Kuenzang and I ended up walking ahead of Dad and Ahma, so Tandi, the driver, decided to slow down and walk alongside them while the 4 of us continued at our pace to the midpoint. It took us about 1.5 hours to get to the midpoint and I was sooooo happy to have finally reached the teahouse restaurant because my legs were so tired and I was wet - with sweat! 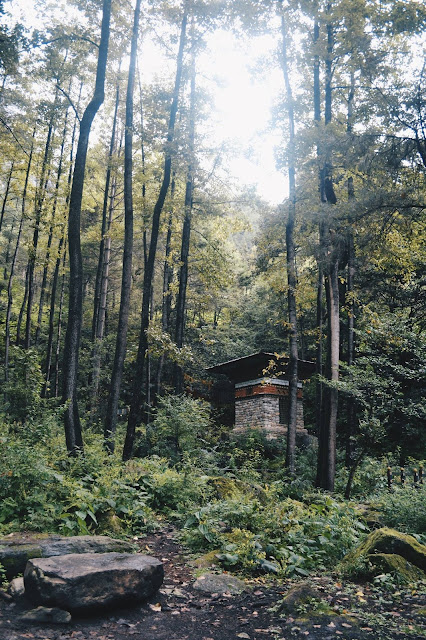 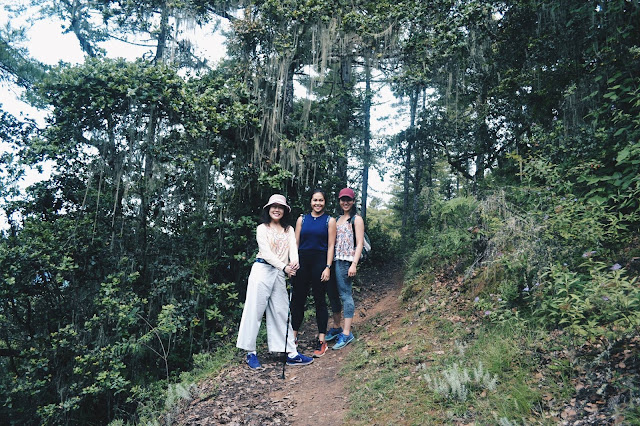 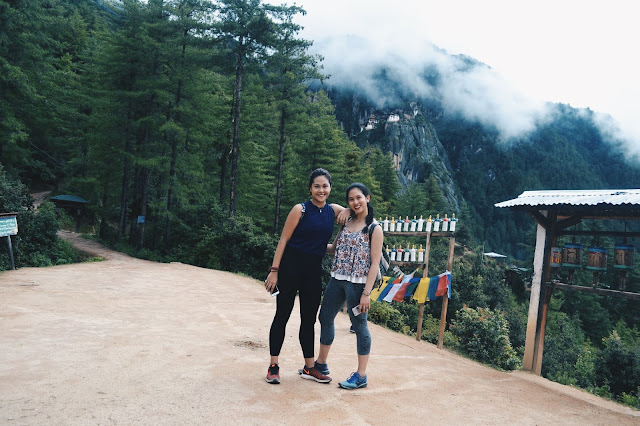 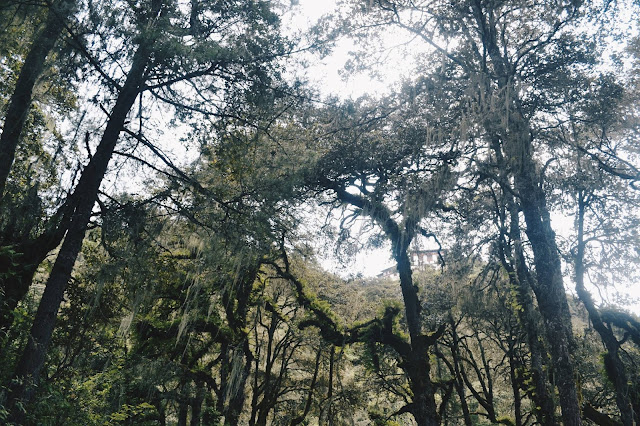 It really did feel like a mini victory reaching the teahouse and we had a little tea break with biscuits to refuel for the next half of the hike which was even more challenging. We sat there for about half an hour before Dad and Ahma joined us and then we set off again! Unfortunately it was just the 4 of us because the steepness got to Dad and Ahma and they both decided that continuing the hike would be too difficult for them.

The next half of the hike gave us plenty of opportunities to admire the view and take amazing photos! That also meant giving us the opportunities to take a break and catch our breath hehe. Halfway through, 2 adorable dogs joined us on our hike and Kuenzang told us that these dogs live on the cliff and could climb up alongside tourist about 2-3 times a day - how fit!! 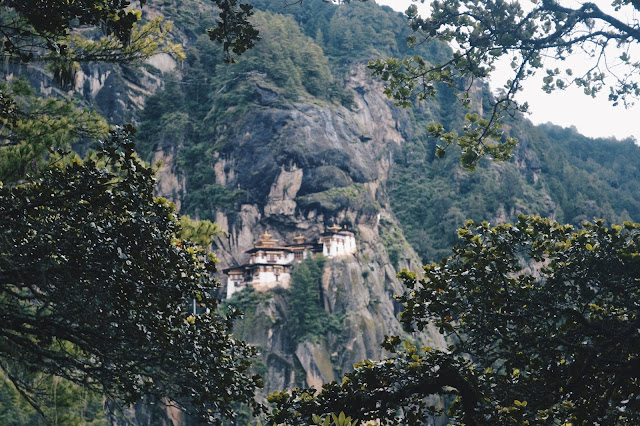 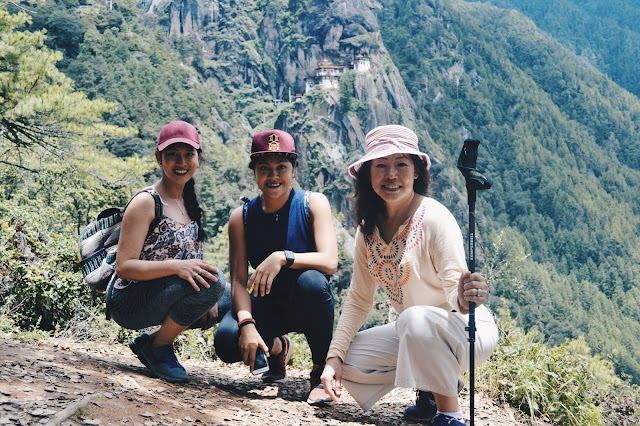 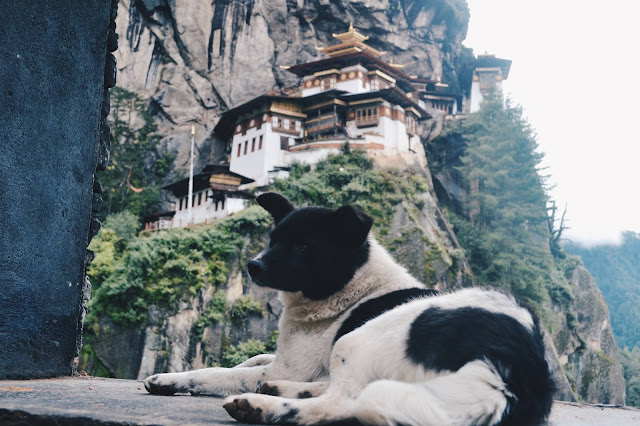 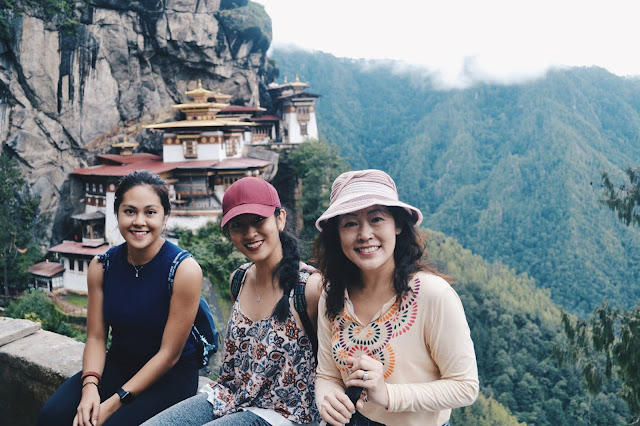 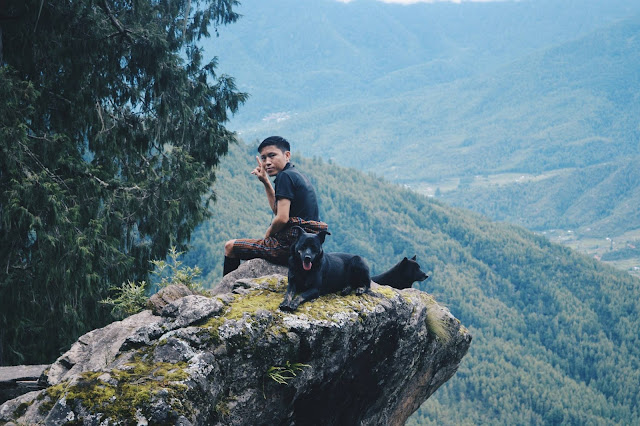 Love this photo of our driver, Tandi 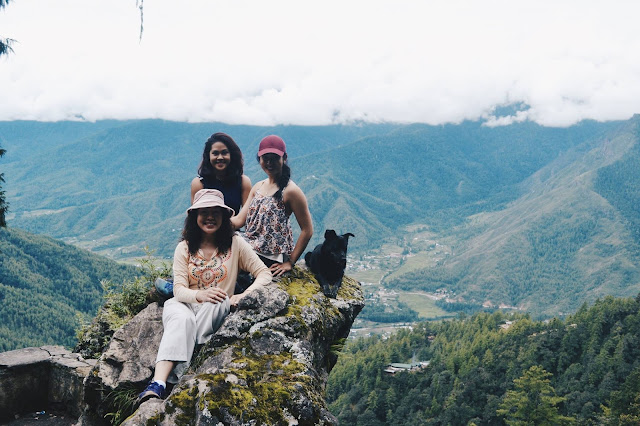 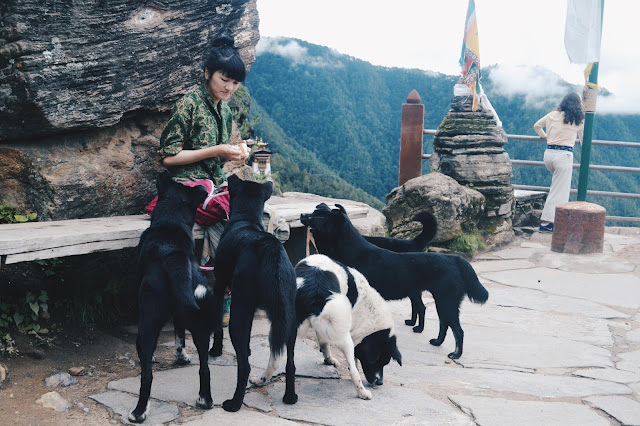 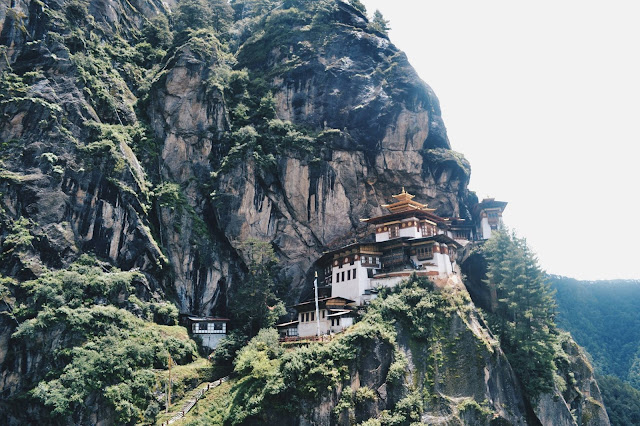 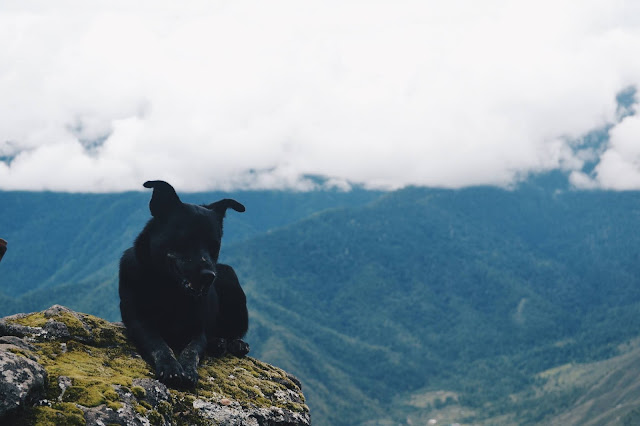 After pushing through the lactic acid building up in our legs and passing a gorgeous and massive waterfall, we finally reached the Tiger's Nest! It was such a fulfilling achievement :') We then had to leave our bags, cameras, hats and phones at the security area before entering the monastery. Kuenzang shared the history of the Tiger's Nest and we learned that Guru Rinpoche, an 8th century Indian Bhutanese master, travelled here on the back of a flying tigress and meditated in the caves here for about 3 years before deciding to convert Bhutanese to Buddhism. The monastery was then built in memory of this auspicious beginning. 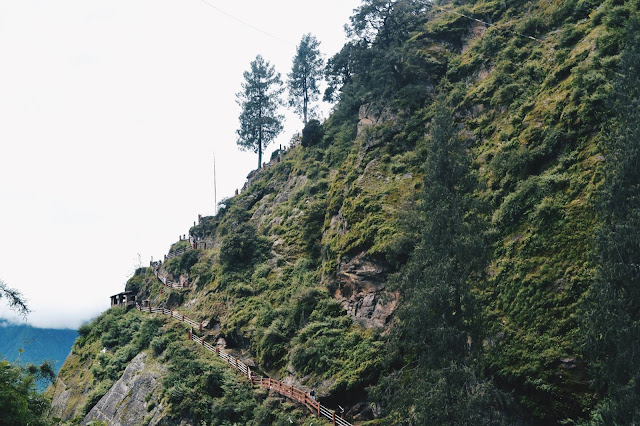 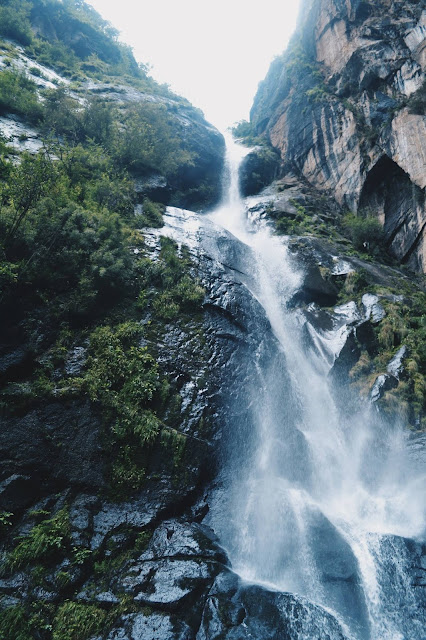 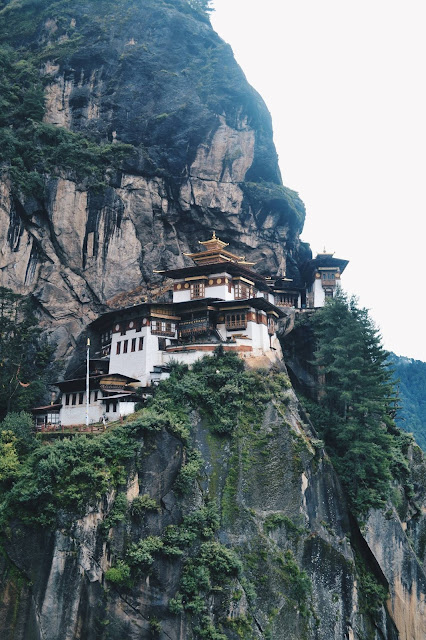 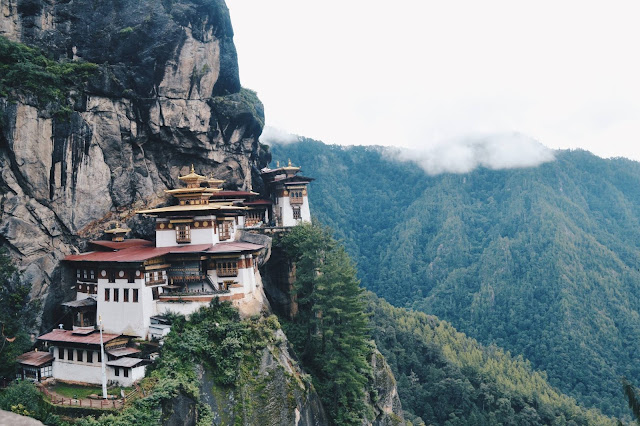 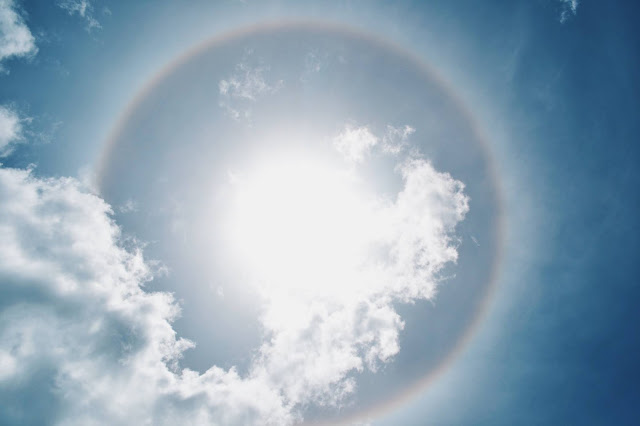 Saw the most amazing rainbow I've ever seen in my life!

Coming down the Tiger's Nest was so much easier than going up - as expected, though at some bits it was still scary as it was really steep so we had to be careful with our footing so as not to slip and fall! We then joined Dad and Ahma back at the teahouse, where they rested while waiting for us, and had lunch together. I was soooo hungry by then and had 2 huge plates of rice piled on with vegetables! I ate a little too quickly but man was it delicious, even more delicious just cos I was so hungry hahaha 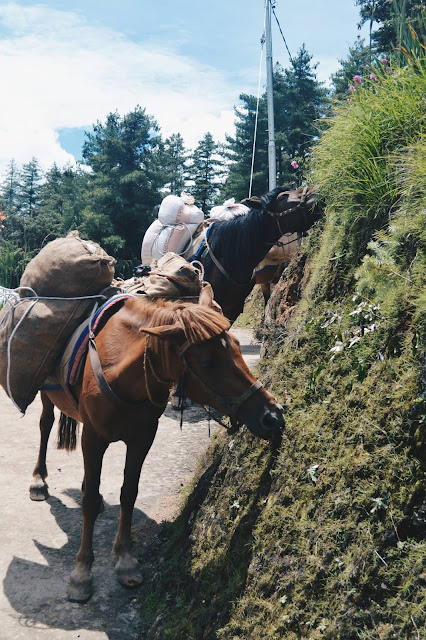 Horses outside the teahouse as we headed down 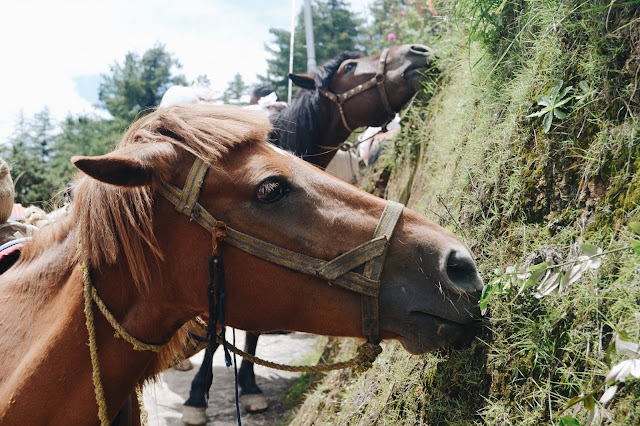 The whole family then descended together, but again, the group split and Mum, Justina, Kuenzang and I reached the base first! Whilst waiting, I decided to stroke the only horse that was left at the base. Guessing by the color of its eyes, it was probably albino and it's mane was really rough. I tried to loosen the rope that was tied around its neck but to no avail :( So I then continued stroking its neck and even tried feeding it some grass. However, it had zero interest in eating the grass that I offered it and I then had a genius idea (if I say so myself) to feed it the banana that I had in my bag :) The horse sniffed at it in my palm and grabbed the entire banana and I promise almost swallowed it whole! I felt so happy for the horse and really wished that I had more bananas so that I could keep it happy and also energized because I'm sure it had been standing there for hours with that heavy saddle on it :'( 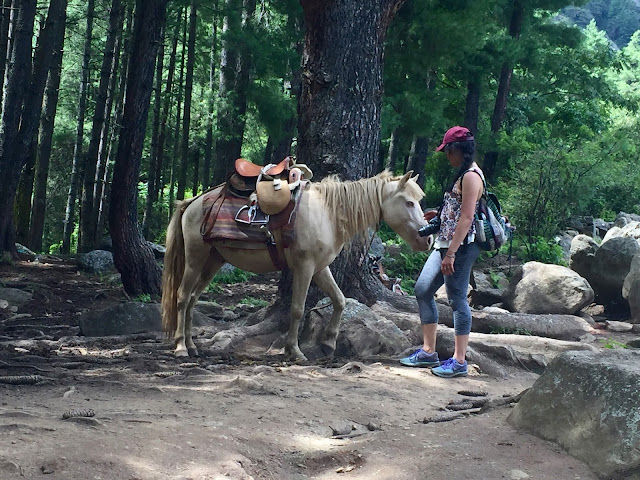 Anyway, after the family had been reunited, we then got in the car and headed to a farmer's house! This was planned in the itinerary just so we could see how the local Bhutanese farmers live. Their homes were really simple with wooden flooring and pictures of the King and his family hung across the walls - fun fact: The locals do not hang family photos in their homes, only photos of the King of Bhutan and his family. We tried their local rice wine and also an apple that was plucked from their tree! After the visit, we then went for a hot stone bath. It was such a unique experience! The bath tubs were all lined up in a little hut and 1/4 of the bath was exposed on the outside of the hut where the hot stones were put to heat up the water, which were of course separated with a partition so as to not burn our feet. The baths were labelled with numbers and if you wanted your water to be hotter, you'd just shout " More stones in bath number 6!" and the man on the outside of the hut will then plonk more hot stones into the bath! These stones were not regular stones, rather they were river stones that release key minerals when cracked under the heat so as to relieve body aches (from hiking!) and improve ones skin :) After that relaxing in the bath for about 45 minutes, we rinsed and got changed and headed back to the hotel to call it a day!

I'd definitely go back to Bhutan and climb the Tiger's Nest again and also do so many other hikes like this in the other cities in Bhutan! Another fun fact: The hotel manager of the Meta Spa and Resort where we were staying at, has a record of climbing up the Tiger's Nest in just 45 mins?!?!?