(little bummed out that I didn't see Zoella or Alfie... ahahaha but its ok, we had close encounters)

We arrived here at the late afternoon and settled into YHA Brighton. They must have overbooked or messed up some logistics but instead of staying in a 9 bed room with shared bathrooms, we had a room to ourselves with 2 double-decker beds and our own bathroom! The bathroom could really pass of as one that would be found in a hotel, not kidding

Anyway, we headed straight to the Brighton Pier which was a 5 minute walk from the hostel 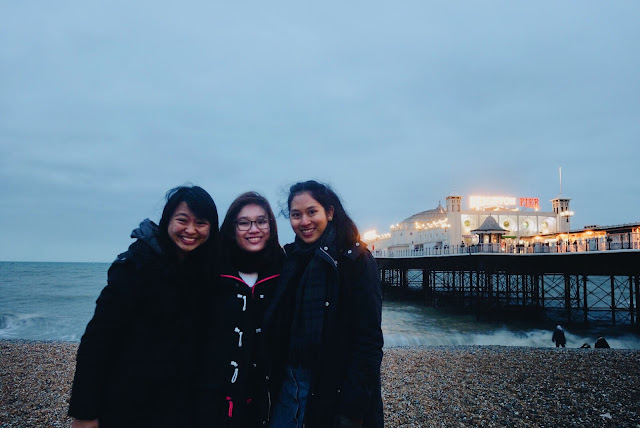 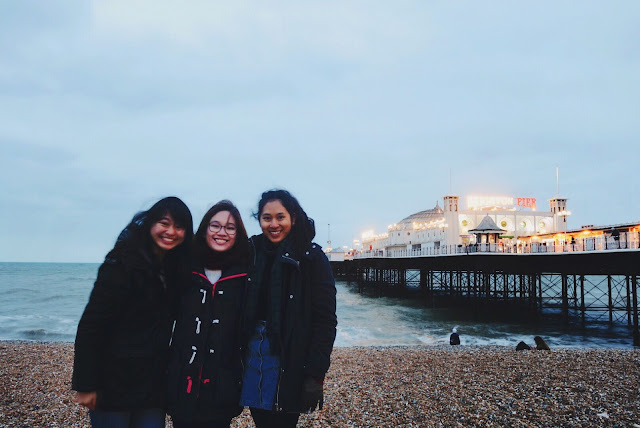 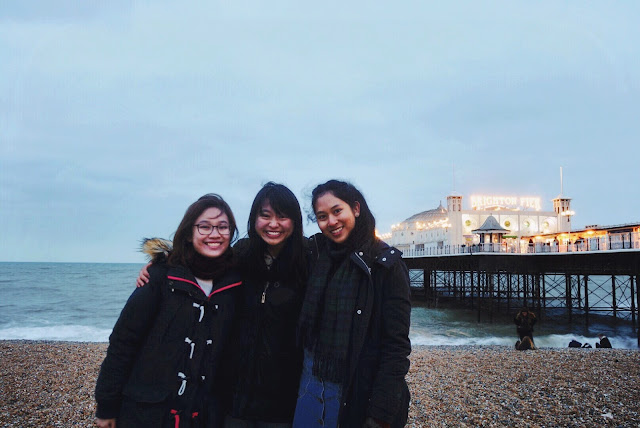 The pier was a bit of a let down and we felt it was a little hyped up. Of course it did not help that it was really gloomy and cold with the sky getting dark, but still on a whole it wasn't that exciting! (Maybe cos we did not go on any of the rides or play in the arcade) 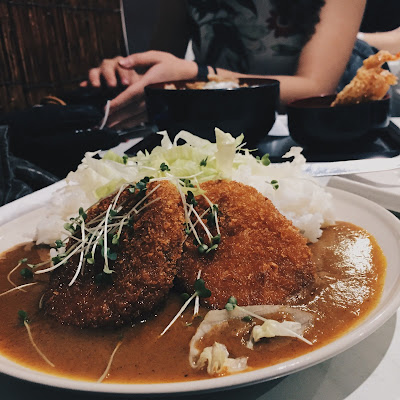 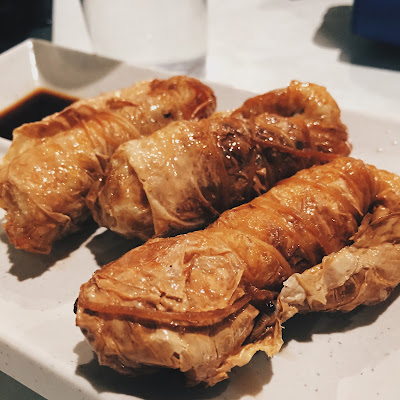 After the pier, we headed for dinner at a Japanese restaurant called Pompoko!!

I recommend EVERYONE to come here!! The food was absolutely delicious, cheap and came within 10 minutes of ordering! I had a pumpkin katsu for just £4.90 and I had a side of vegetable rolls for £2.50 - it was comparable to Japanese food in Singapore!

The staff were all Japanese as well - a sign that it was a good, authentic Japanese place, and it was packed with people

The next day was a day of adventure! We decided to head up to the Seven sisters cliff 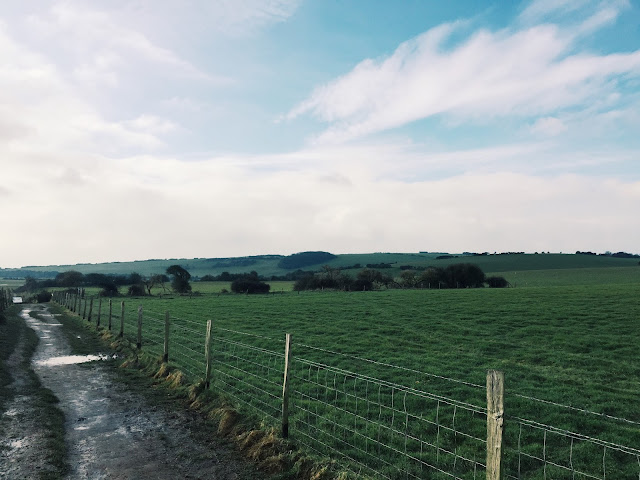 Oh look - pretty!! But if you turn your attention to the muddy path on the left, that was what we walked in - and worse, for a good 2 hours to get cliff - no wait, THE WRONG SIDE OF THE CLIFF

Picture this: Me in my coat and a nice green scarf, carrying a handbag, wearing nice shoes my sister got me from TopShop, in the middle of endless fields of grasslands, trudging through miles and miles of mud and grass and having to shuffle on the ground because the mud was so slippery. The pathway at the start of the trail read ' Public Footpath ' and I was thinking " Oh that's nice, there's a paved pathway for us to walk on " but no I was completely wrong. Anyway, I must say of the 3 of us, I came out of that trail being the cleanest because I didn't manage to slip and fall into the mud but both Tessa and Beverly had :( But the mud was so deep at one point where my whole foot just sank into the mud and it covered my ankles - no not fun. Moving on to the point where we ended up on the wrong side of the cliff, the whole time we were walking on the right side of the river and we did see people walking on the opposite bank of the river, thinking that we could cross over to that side when we got out of the trail. But little did we know, that there was no way of crossing the river to get to the cliff unless we waited for the tide to subside at 12:30pm and have a 50% chance of making it.

So we waited for an hour and a half in the cold, and tried our luck crossing the river. It did not look too promising because even though the tide had subsided, there was still a 5m gap of the river that we had to walk across and the current was just too strong. We tried throwing rocks into the water to test how deep it was and the sound of the rock plonking into the water was not comforting. So we then decided to scrape the whole idea of walking up the cliff and the other areas that we wanted to visit that was on the opposite side of the river :( It was really 'so close yet so far' because the only thing that was separating us from getting to the other side of the river after that tough 2 hour journey was 5m of water! 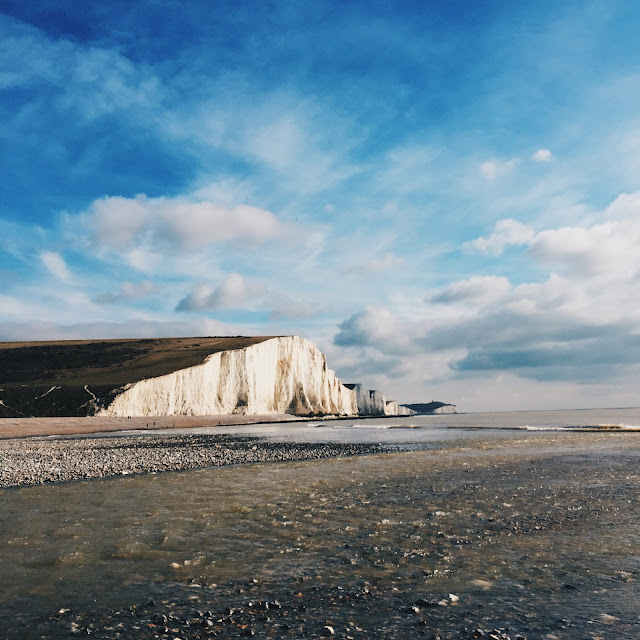 But it was a blessing in disguise because if we weren't on the other side of the river, we would not have been able to see the whole Seven Sister cliff like this :') 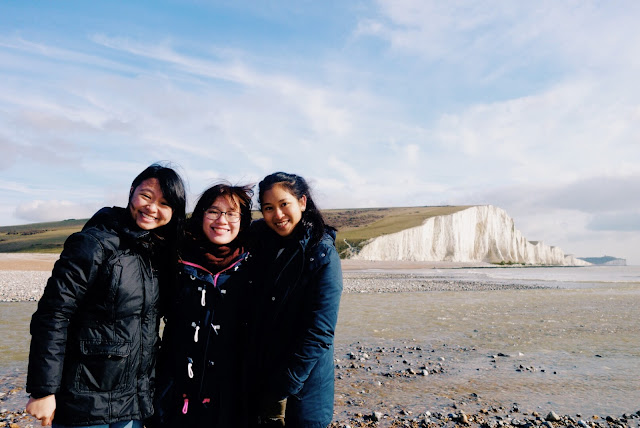 Smiling through the pain because it was freezing plus the fact that our feet has been completely submerged in the cold river water when we tried to cross :( 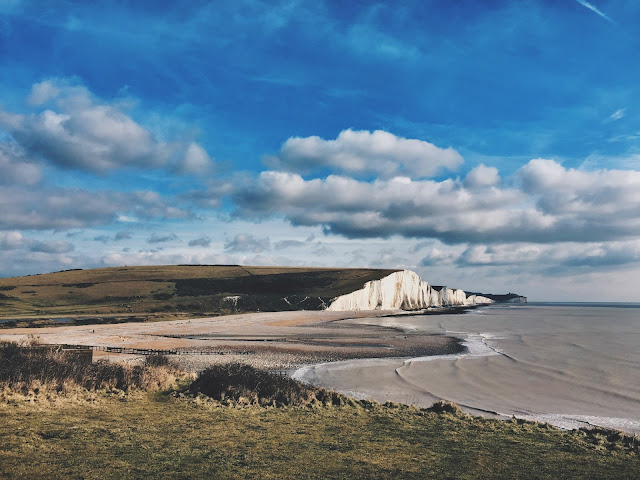 But look at this view!! :') We had lunch sitting on a bench on another cliff facing this beauty 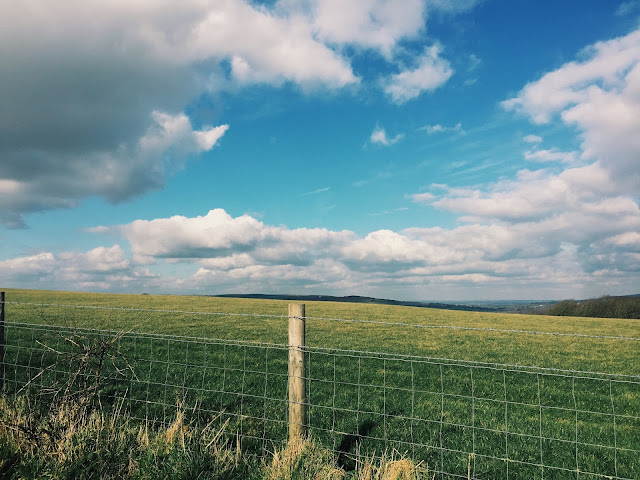 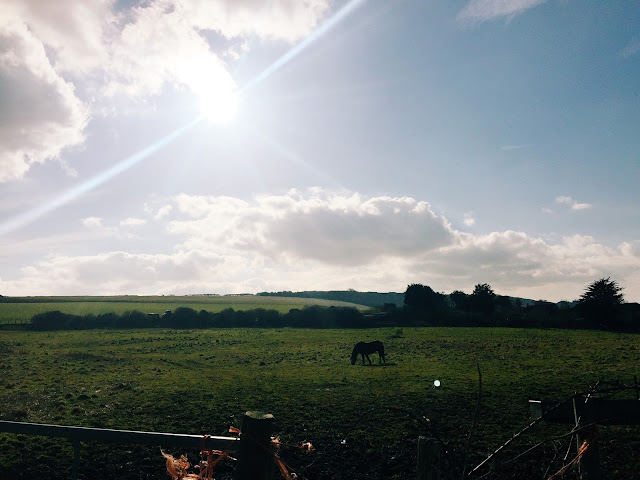 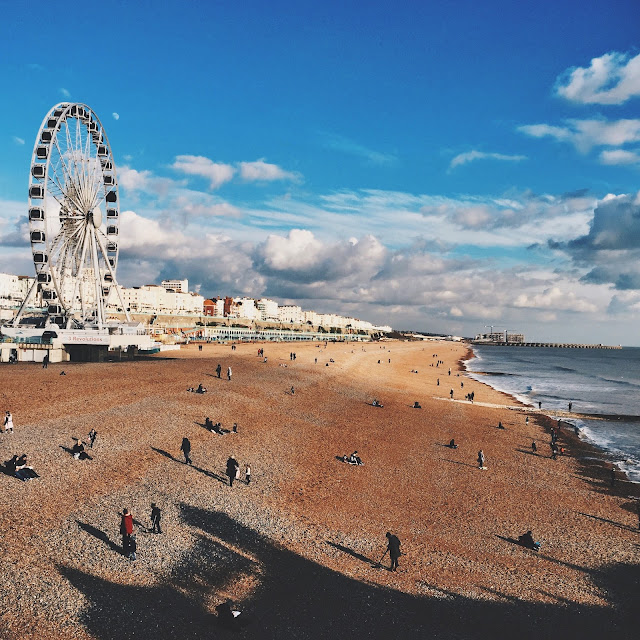 It was so bright and sunny and we decided to head to the pier again just to get more pictures! It was much more lively this time because of the great weather 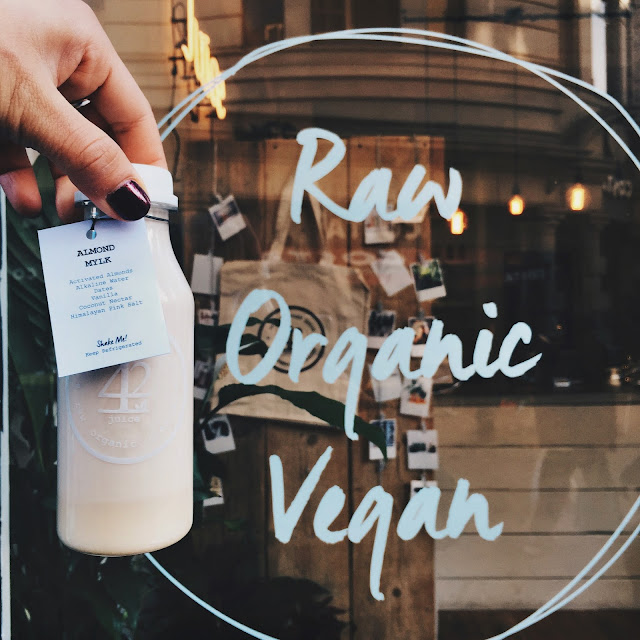 I got an almond milk drink from a juice place called 42 juice and it was delicious!

Time for the close encounter story: When I went back to the hostel that night and was scrolling through instagram, Alfie Deyes had came to this same juice place and got a coffee and also went to the pier?!? I almost died. We could have met :( OH WELLS 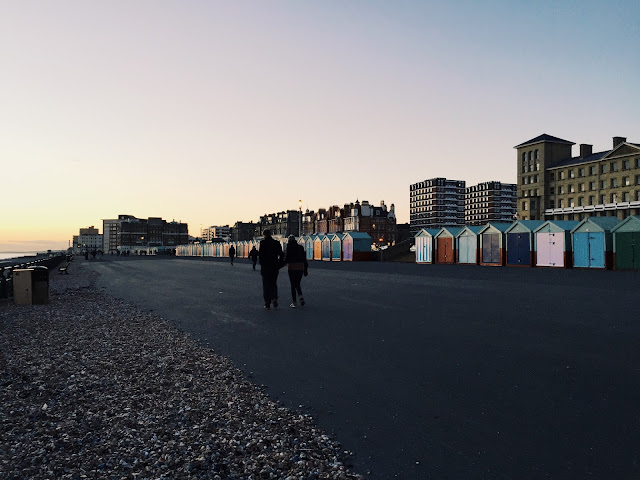 After the Laines, we headed back to the pier wanting to see the beach huts after getting confused because the famous Brighton beach huts were actually in Australia and not Brighton... so then we went for dinner at Pompoko again :) and I ate the same thing! 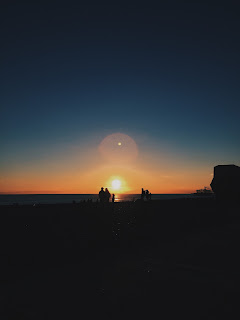 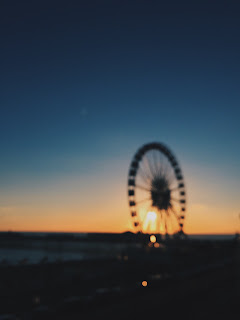 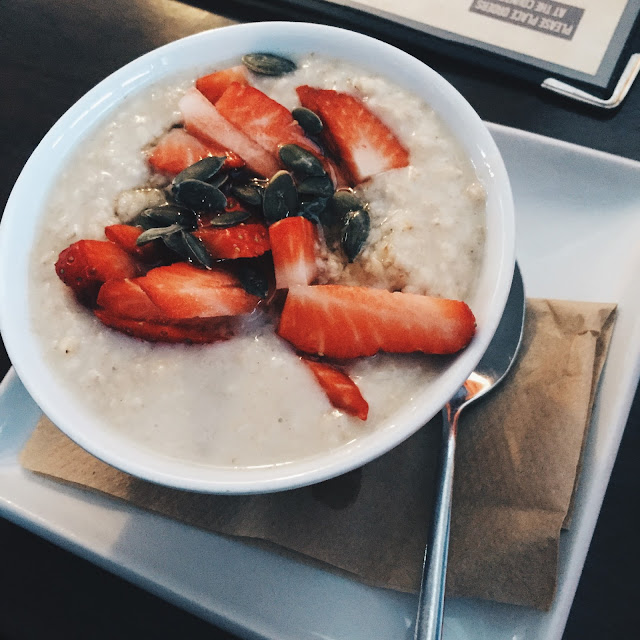 The next morning, we went for breakfast when I got this yummy bowl of porridge, and then went to the Royal Pavillion! It was the former royal residence for King George IV and part of the Pavillion was influenced by Chinese designs which was cool

After the pavillion, we just walked around and went shopping for a bit where I got a beanie and Beverly and Tessa bought shoes from Primark because they washed the mud off their track shoes the night before and they were still wet, then went to the train station and bid goodbye to Brighton and marked the end of our trip :(

I had such a great time traveling to these 3 cities with such great company! The many times we got lost and ended up somewhere unintended turned out to be blessings in disguise and just made the adventure even more adventurous :') I'm so glad we were all easy going and could easily agree on places to visit and to eat and no one complained during the numerous times we got lost and having to walk such long distances to get to the places we wanted to visit. Just chilling in the hostel after dinner and talking whilst sitting on our beds and sleeping by 11pm every night is something I miss dearly!