So I headed out on the 23rd morning without any plans in mind besides taking a ballet class at Dance works and the class was really good! I forgot to bring my shoes over from Edinburgh .... but I just wore socks and they worked fine. Dance Works was just opposite Selfridges (on the right) and their window displays are amazing! 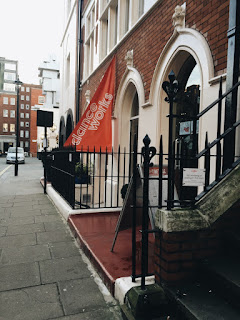 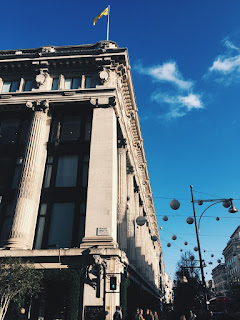 I just wandered along Oxford and Bond street in the day and had class from 3-4:30 and when I walked out of the studio I was greeted by amazing christmas lights that all came on and I was seriously in awe!! 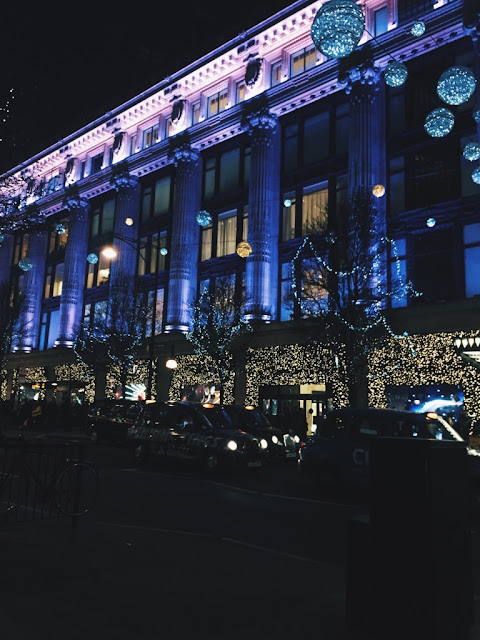 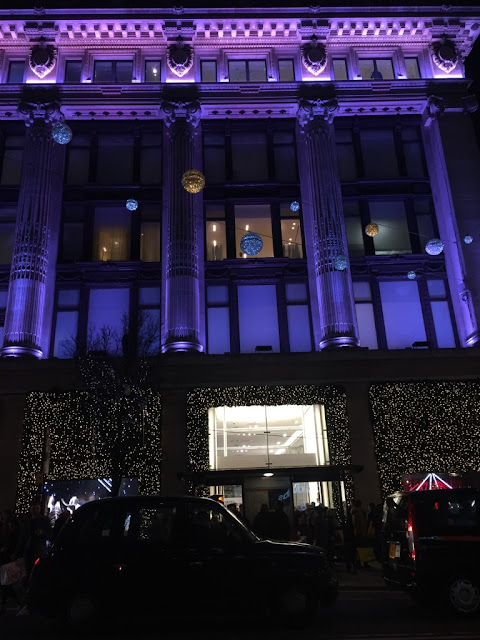 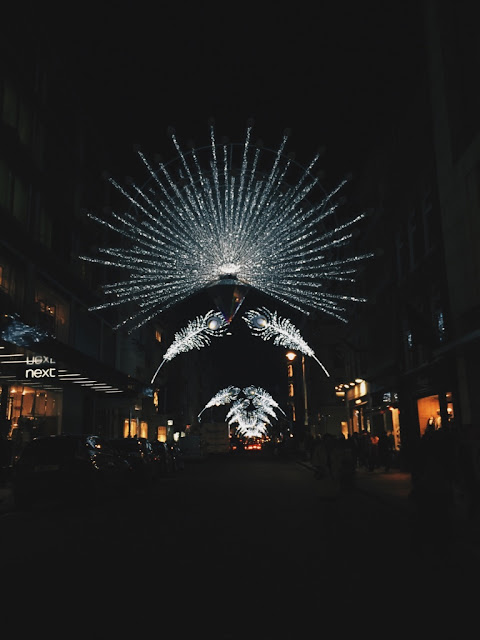 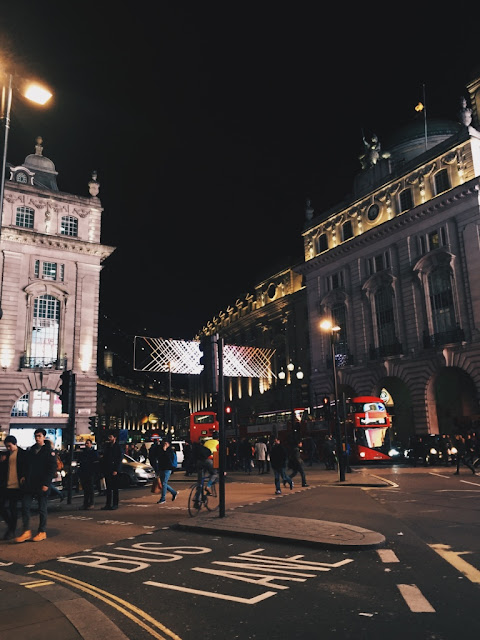 I love just standing in the middle of Piccadilly circus and just bask in the atmosphere :') 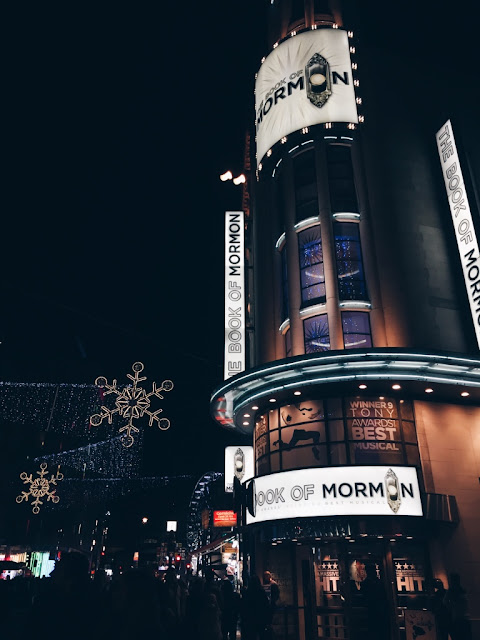 I would love to catch the Book of Mormon again!!! But I may get tickets for Les Mis instead or even Wicked hehe 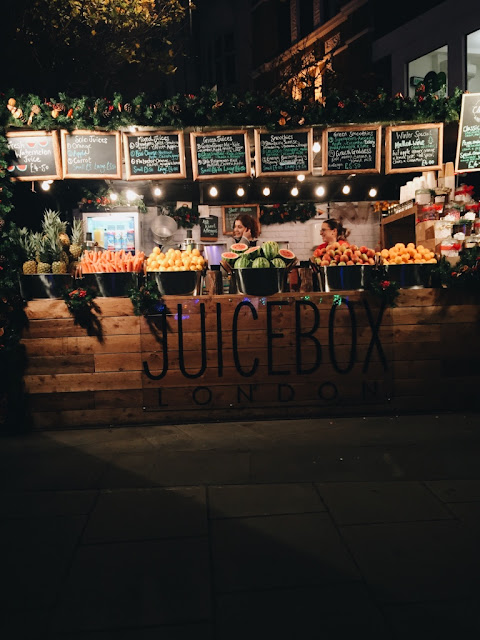 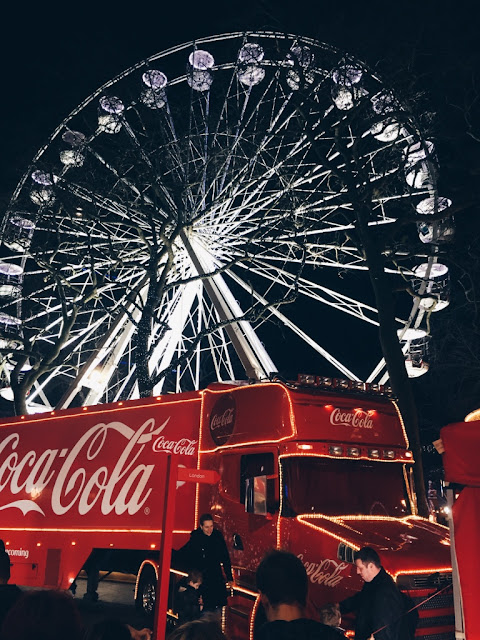 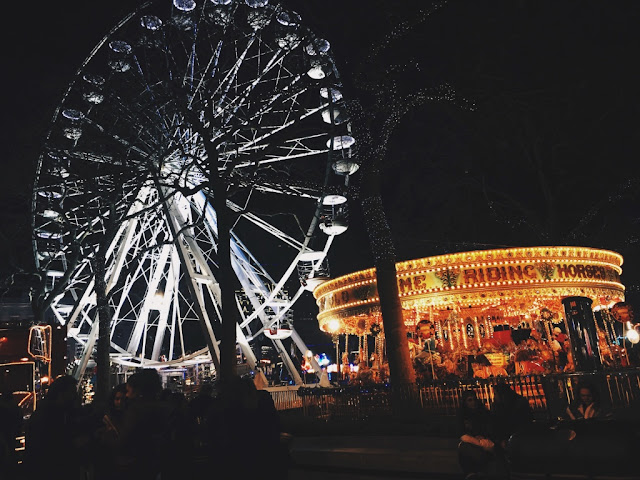 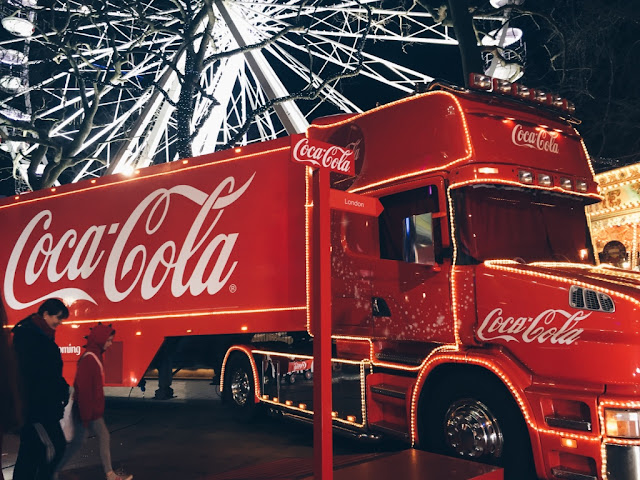 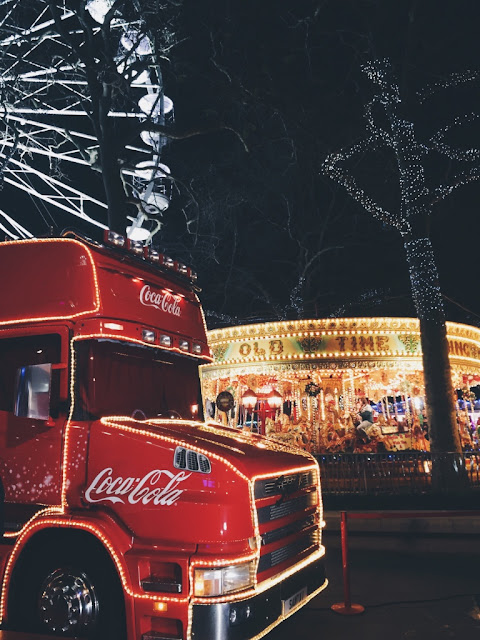 Leicester Square had their own little Winter Wonderland with the Huge Coco Cola van which was very nicely lined up with lights all around it! There was a street hip-hop performance going on as well and it was really good :) The street performers I find, have just got so much character and swag and they really know how to please the crowd and spread their joy when dancing! 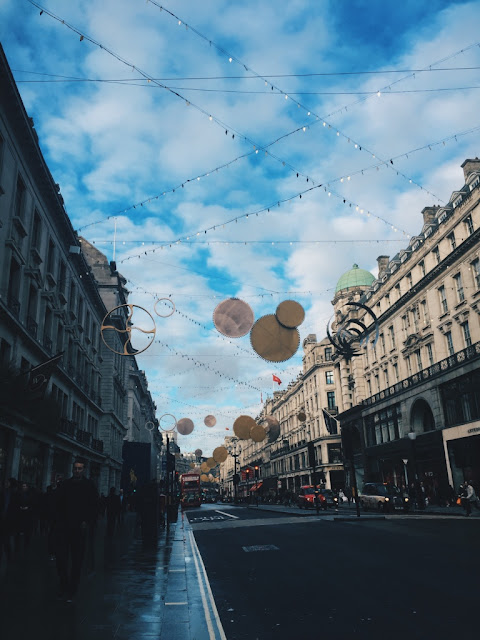 Finally a picture of London in the day hahahah 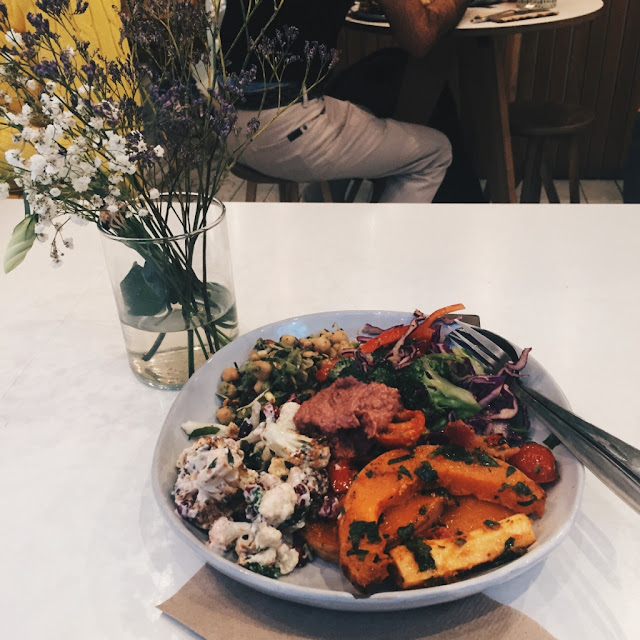 So on the 24th at around 12pm, Windson (friend from work) called me and asked if I wanted to watch Miss Saigon - a musical about the Vietnam war that afternoon at 2:30 as he had free tickets and of course I agreed because who would pass up on an opportunity to see a musical!! (ok I know many would probably not but I love musicals) and so I headed down to Leicester Square and picked up a Christmas present for a friend on the way to the theatre, stopped for lunch at this place called The Detox Kitchen at Kingly Court and headed down to meet Windson at Prince Edward Theatre 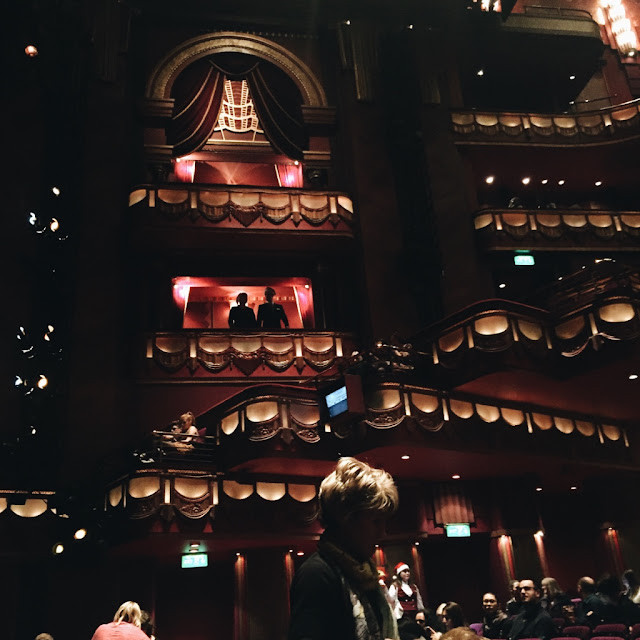 The theatre was gorgeous!! and the musical was pretty good, the singing was of course fantastic but I wouldn't say its my favourite but I'm so glad I caught it anyway :) and of course it was so nice to see a familiar face from home again! Windson and I didn't really have much time to chit chat though as he had to rush off for Christmas dinner with friends but Im seeing him again on the 27th with other friends from work which I'm so excited for! (Especially you Zoea :) )

I decided to walk from Piccadilly station to Green Park station just to enjoy the night life in London :) I passed by Waterstone's and decided to head in. They had the most adorable categories of books such as "Bounded printer paper to make you smarter" and "Unputdownable", which I thought was pretty funny 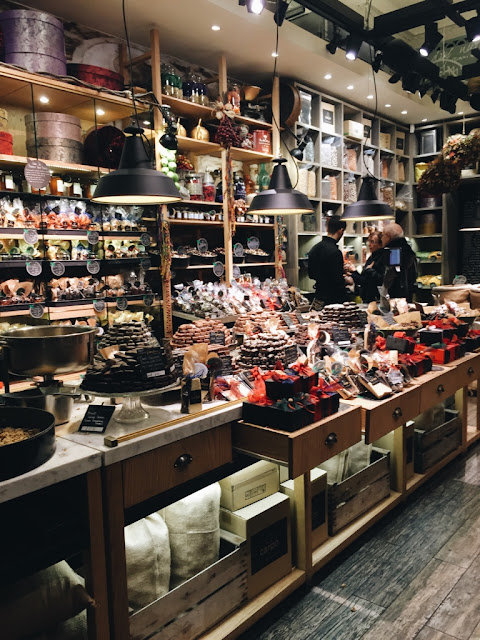 I then passed by a chocolate store which I forgot the name of but they labelled all their chocolates as being suitable for either vegans/vegetarians which I thought was so thoughtful! 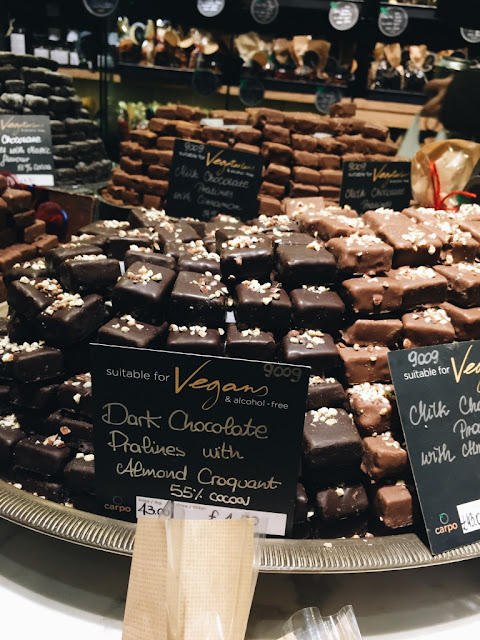 I settled for the Stevia dark chocolate which cost 5.60 which is honestly really expensive but I didn't know it was going to be that expensive as it was priced by weight and I couldn't gauge the price :( But I just took it as a christmas present to myself hehe 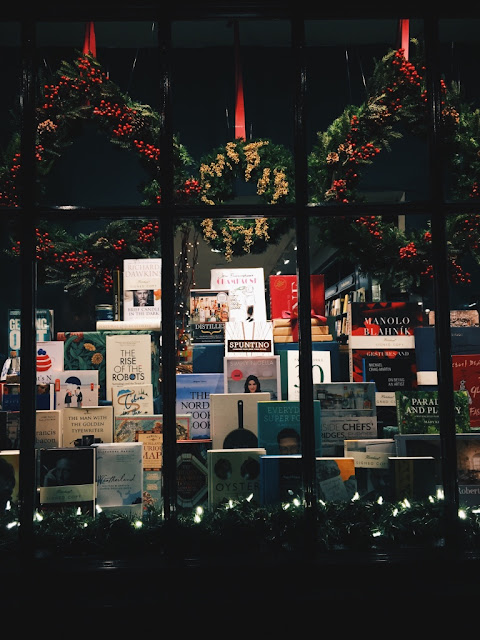 I then passed by another book store with this beautiful window display :') I like how so many of the stores here take so much effort into making their window displays so beautiful and you just see people gathering round and appreciating the displays which is a very pleasant sight

25th - Christmas day!! I spent the day helping to prep for Christmas lunch and then Uncle Maneksh, Aunty Rita, Hari and I headed to the neighbour's house for a bit in the morning where I gladly offered to take the role of caretaker of the children ahah and honestly I enjoyed it because 1. I didn't know the neighbours at all so I just wanted the parents to have a nice get together and chit chat 2. I actually really enjoy playing with children - and I ended up helping to fix build a caravan out of lego and reading Frozen with the girls which was nice :) We then headed back to the house to have christmas lunch! It was deelicious! I was so full that I still feel full now that its 8pm and I haven't had dinner and I don't really know why cos it's not like I ate that much... but oh wells

Ohamgee how could I forget - Justina passed gifts to Windson to pass to me as it was too expensive to mail stuff over form Singapore and I opened them today as a Christmas gift and I was so incredibly happy!! She got me so much stuff with the highlights being - Freeze-dried durian chips (OMG??), a Starbucks tumblr, Avocado soap and very very nice perfume :) and my mother brought over some ginseng for me which I cannot stand the smell/taste of.... but I know it's cause she loves me!!

Anyway, so tomorrow is boxing day and I might head out to catch some good sales in the shops! Im definitely gonna pop into Lush and get a bath bomb - or just to smell everything :)

Hope that everyone had a splendid Christmas with the ones that they love and also to enjoy the rest of the holidays before the new year which is in just 6 days!!!