(I had to check my camera roll to remember what I did on day 7) So today was a very chill day, headed out for ballet at 11 to only find out that the class I wanted to take was at 3pm that afternoon so I headed back (and thank goodness I checked before I got on the tube) and then did some painting and chilled in the house, had lunch which was a delicious bean burger patty with salad and then headed out again at 2pm for class! 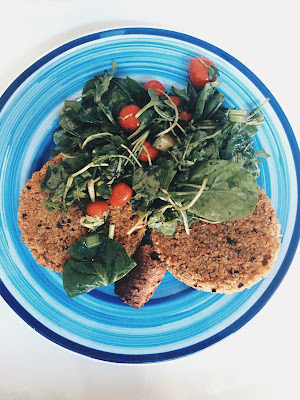 After class I headed to Whole Foods to get some vegan cheese and pizza bases as we were having pizza for dinner that night! Human traffic in London along Bond street is crazy at 5pm and I was getting so frustrated especially because I had to head to somewhere fast and it seemed like everyone was getting in my way?? Anyway, I made it to Whole Foods after taking the bus in the wrong direction for a good 15mins, and got all the ingredients! I could honestly stay in Whole Foods for hours just admiring the variety of foods that they have! If only I had the money to get all of the em :((( We had pizza that night which was delicious!! I must say that the vegan cheese I got did not taste as good as dairy cheese but it was ok melted on a pizza, just that I wouldn't eat it on its own

I took another ballet class at 11am and I coincidentally met a girl from Singapore whom I knew as we took the adult classes at SDT together! What a small world! We never talked before this but we started talking when we saw each other and that was nice :) After class I called Paul - Mum's friend when they worked together for British Airways, and we made a very impromptu plan to meet up for lunch in Richmond, where he stays, that same day!

We went to a newly refurbished pub now restaurant called the No.1 on Duke Street and the service was excellent there as the staff and chef were very accommodating in making sure that I had a vegan option to eat :) I had a quinoa salad with beetroot and avocado on the side and then a Free From Everything dessert which consisted of a vegan meringue with fresh fruit and a berry sauce! Paul and I had a lovely conversation about university, British talk shows and radio stations, christmas, Scottish and British rivalry, the agriculture industry and many other topics 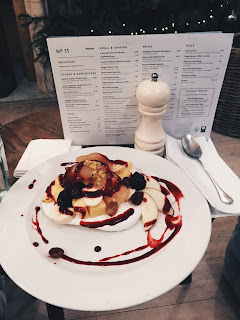 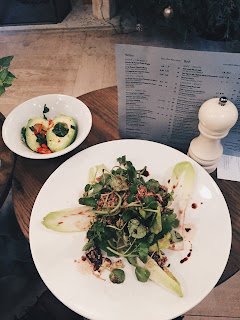 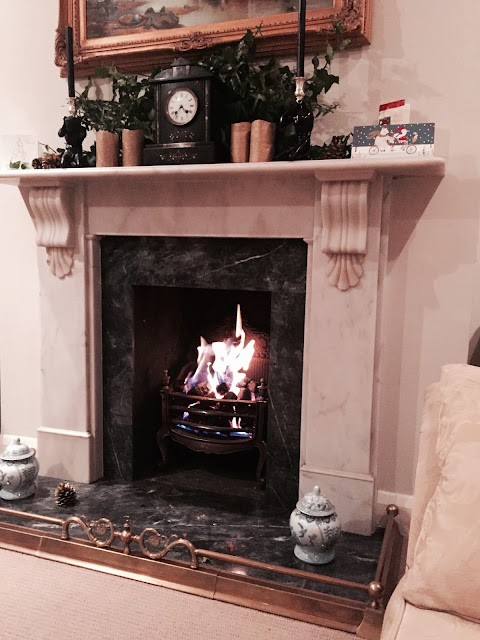 I kept to my promise and headed down to Sloane Square - a place where I've not been to before!

The atmosphere here was so much more pleasant, relaxed and calm unlike busy and crowded central London. I went to The Good Life Eatery in Sloane Avenue and had Paleo Chestnut and Almond Waffles with a blueberry chia jam, coconut yoghurt, mashed banana and hazelnuts and it was a-m-a-z-i-n-g!!! The waffles honestly tasted great on their own as it was packed with flavour and so fluffy! Though it was quite pricey at 7.95, I thoroughly enjoyed it and I'm glad I tried it :) 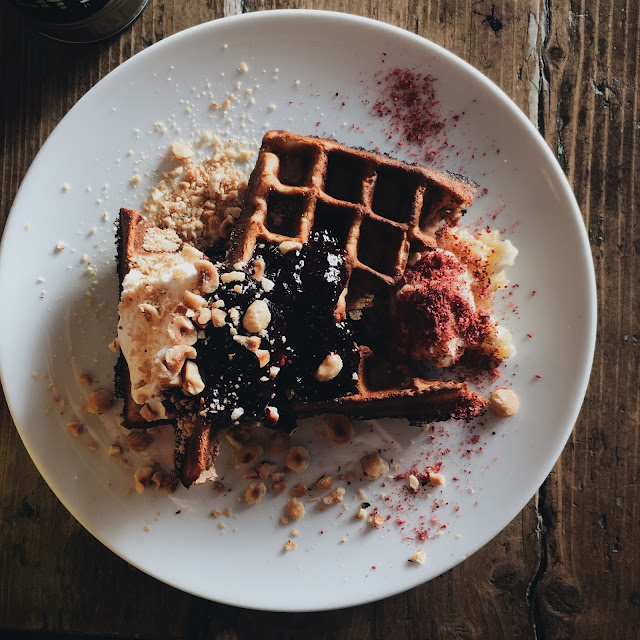 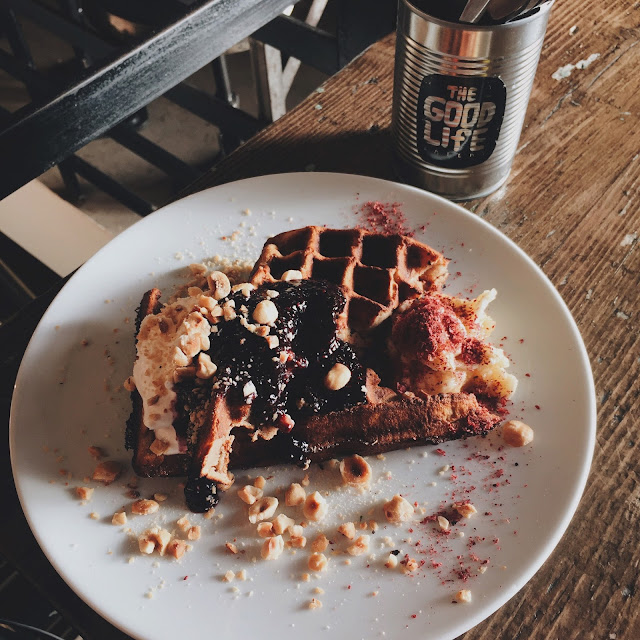 Not the best photo, but I loved the architecture here 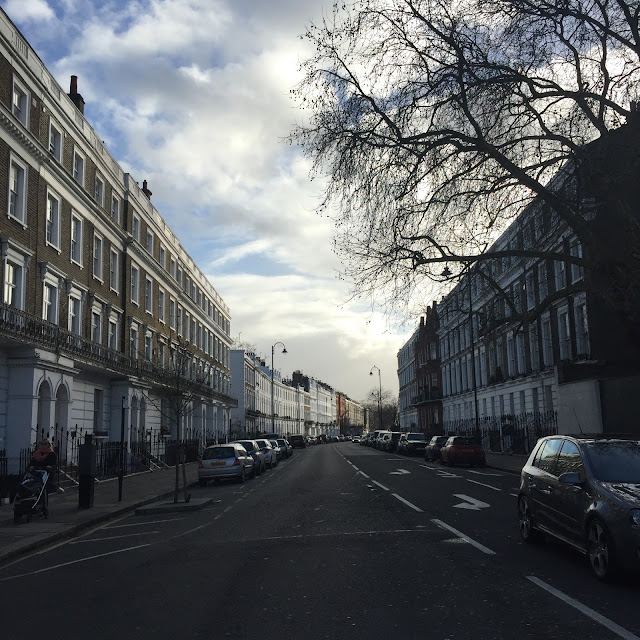 I then saw a Lush shop and got an Intergalactic bath bomb! Decided to treat myself to a bath that night which I probably have not taken in a good 6 years (and I would like to keep it that way because it is quite a waste of water). I love Lush and most of their products are Vegan as well! (Most and not all because some of them contain honey) 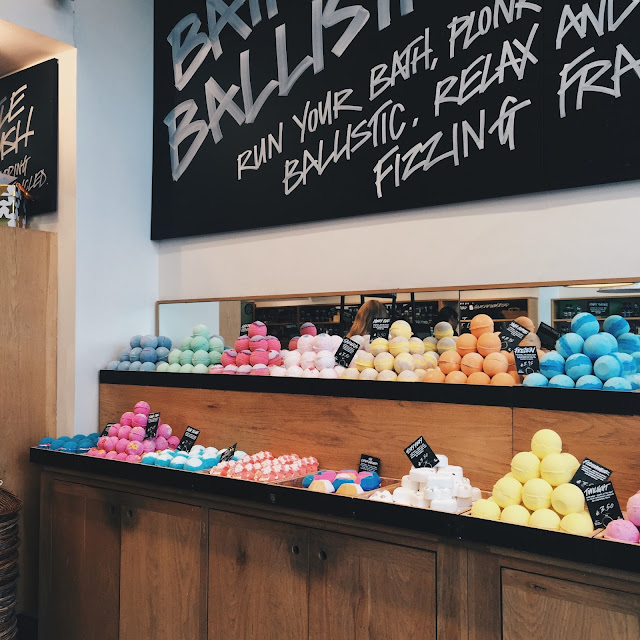 I then headed to Green & Stone which is an Art shop and I wish I had the money (again) to get the paints, brushes and watercolour pads! 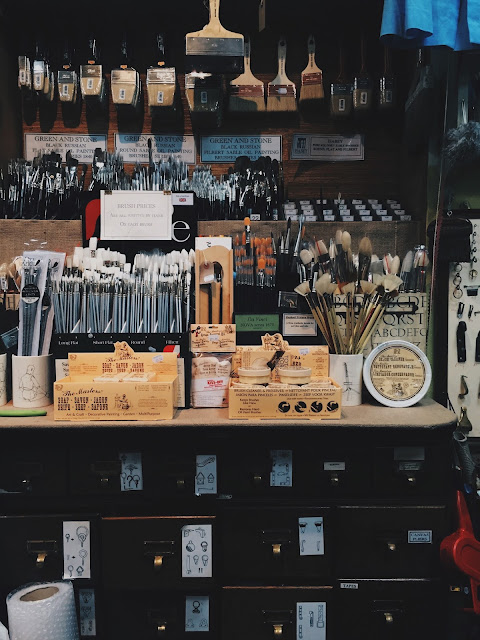 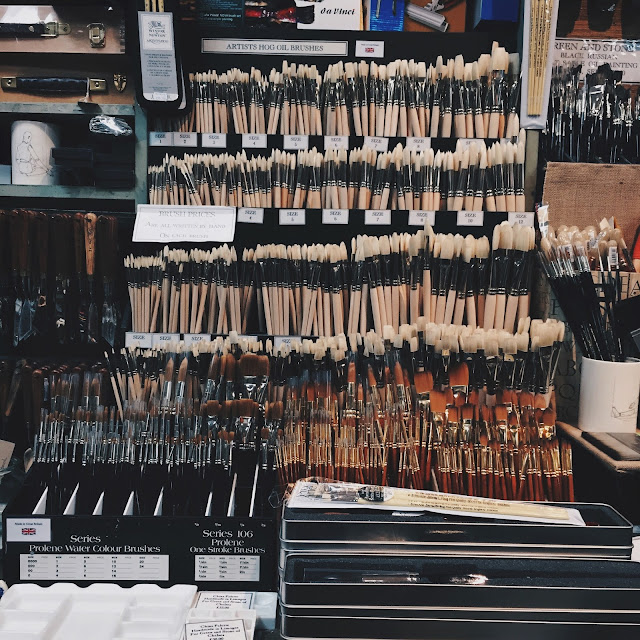 After that, I saw Anthropologie and went in as I adore their homeware section!

Look at how beautiful the shop is! 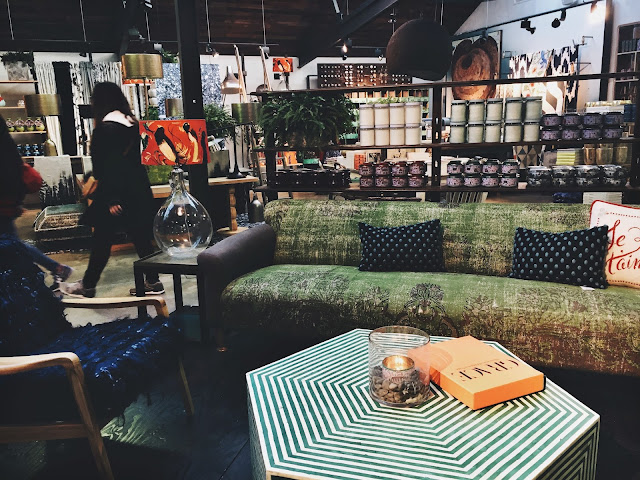 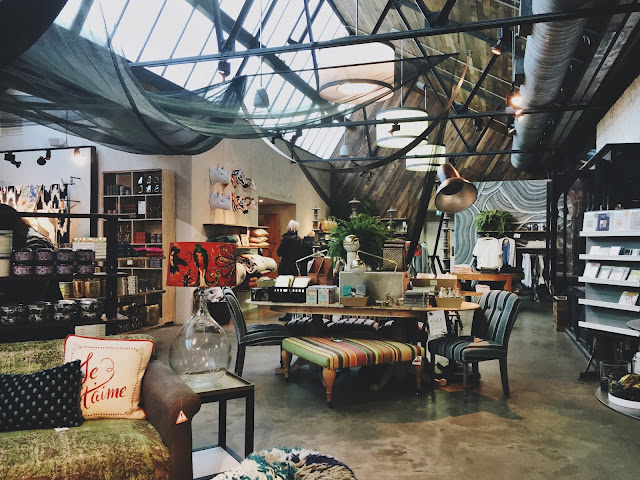 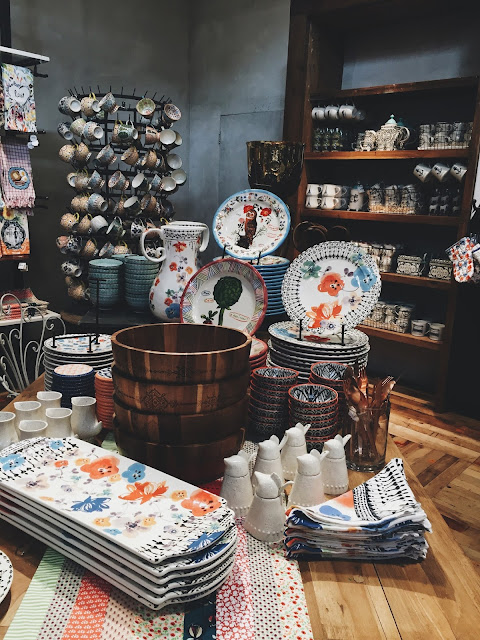 Definitely going to get some stuff from here when I get a flat next year! 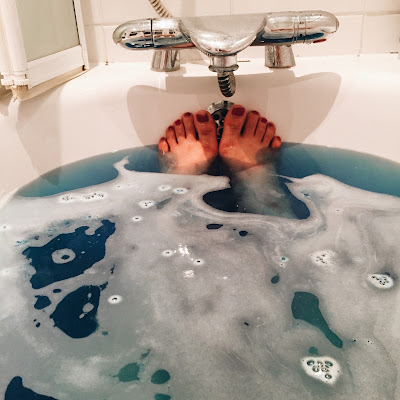 My lovely bath experience that night! 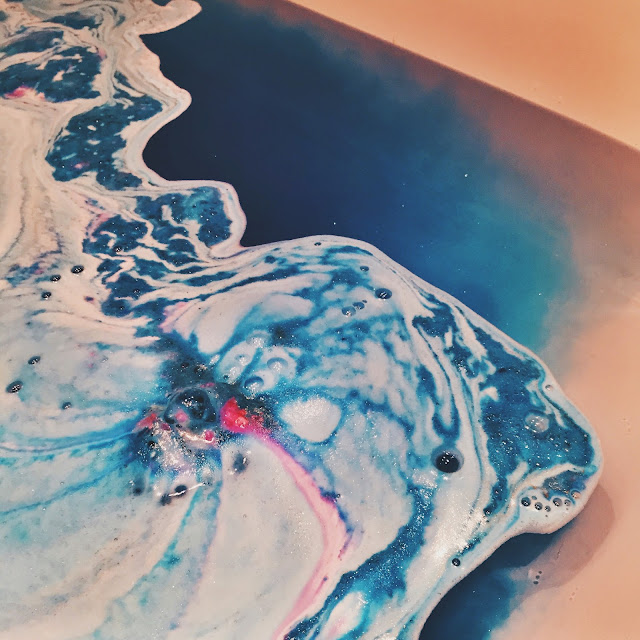 It was so pretty and the water was sparkly!! 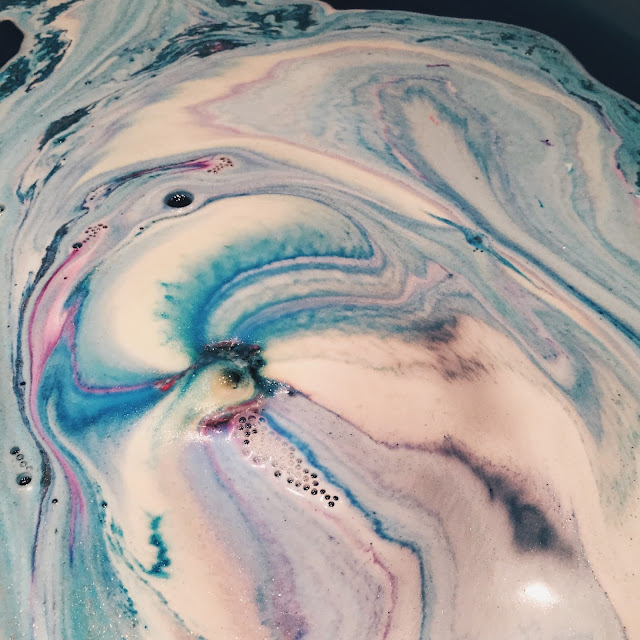 I then went to watch tv with Uncle Maneksh and Hari as we wanted to catch the countdown for New Year's and the fireworks as well. The fireworks were incredible and they went on for 5 minutes!!

Watched Pan in the morning with the family and it was quite good! I like it when they make prequels to movies as it's always interesting to know the back story just like in Malificent! Watching Pan made me feel like watching Disney's animated version again and I might just do that later tonight. After the movie, we headed to Tesco to do a huge food shop which was really fun - I love grocery shopping! Then headed back to the house and played with Hari for the remaining afternoon, had dinner, helped Aunty Rita to declutter her closet and now I'm just chilling in my room

Ahhhh I can't believe it's already 2016! I'm still thinking of how to summarize 2015 and I wouldn't say it was the best year but it was great nonetheless. I have this book called a Q&A a day and it's a 3 year journal and I am now starting again from the 1st of Jan as I've already completed 2015! It's going to be so fun looking back at my answers from the previous year and comparing them. The last question on the 31st of Dec from last year was "What was the best thing that happened this year" and I think working at TTP (The Theatre Practice) was probably one of the best things. I met so many new and lovely people and being able to make props and work as a backstage crew member was so incredibly fun! Though the working hours were quite long, I would do it again without hesitation :) 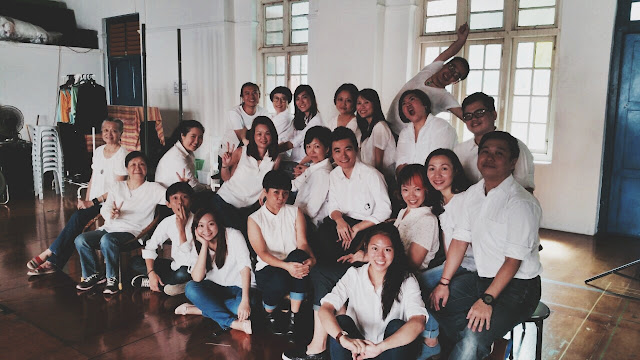 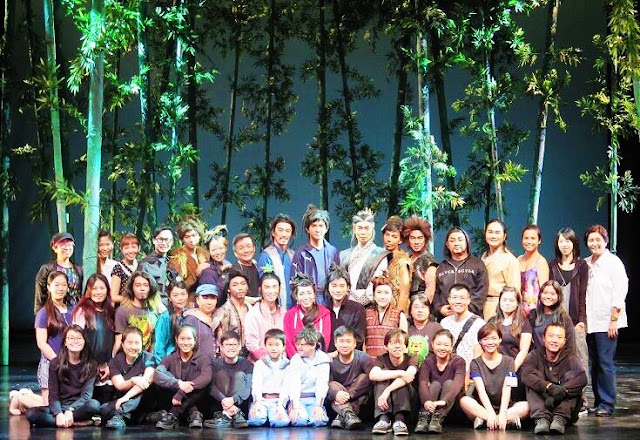 and this was the whole cast and crew of Tian Men Jue which was their production in March where I was doing backstage crew! 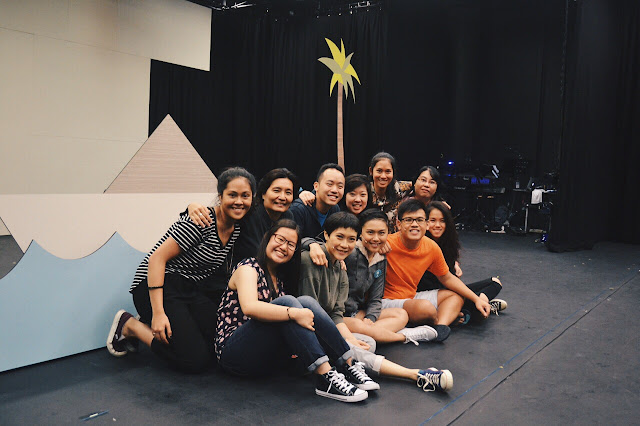 and this was for a smaller scaled children's production in June/July!

Also with the post A level break in 2015, I think I personally found out who my true/better/closer friends were in a sense that I realised there were people I would talk to on a regular basis just due to the fact that school brought us together and that we saw each other everyday and those that I would make the effort to meet outside of school even after we had graduated. I enjoyed being able to have spent more quality time with these friends in 2015 be it going to cafes, baking, relaxing at home or even virtually through constant texting. Through the time that we've spent together, I've not only learnt so much about them, but about myself as well and I am so glad to have found these special friends :')

Looking forward to all the new and exciting opportunities that 2016 has to offer regardless of how daunting they may be. Some of my resolutions would be to go out of my comfort zone a little more,  putting in more effort into trying to find out what I really want to achieve and putting more heart into anything that I do!

Here's to a new year and a new beginning :')