Went to Covent Garden which used to be one of my favourite places to go in London! It used to have such a rustic feel with so many local vendors and little shops selling lovely handmade items but now they've seen to have brought in all the high end brands such as Chanel, Dior, Burberry and many others which doesn't make it feel as rustic anymore :( However, I still really like the fact that there is always live music in the square at the ground level of Covent garden where people are just having tea and cakes outdoors. I also had one of the best hot chocolates I've ever had at Whittard and it was the Salted Caramel flavoured one! After a very good Indian lunch, I then wandered around Oxford street whilst Uncle Maneksh, Aunty Rita and Hari headed back home to meet a friend. I really need to start exploring places that I haven't been to in London because I'm starting to get a little bored of seeing the same shops all the time. My mission is to visit more vintage and local shops!

Went to the Tate Modern with Zoea, Ashleigh(her bf) , Zara(her sister) and Mark(her sister's bf)! I was basically 5th wheeling... Nah I'm kidding I did not feel like that at all hahaha

and I did not really enjoy the exhibits because to be honest I cannot understand modern art and therefore neither can I appreciate it. I really want someone who truly understands modern art to tell me what they see in an art piece because I am seriously curious as to what they can see in a painting that makes no sense to me at all 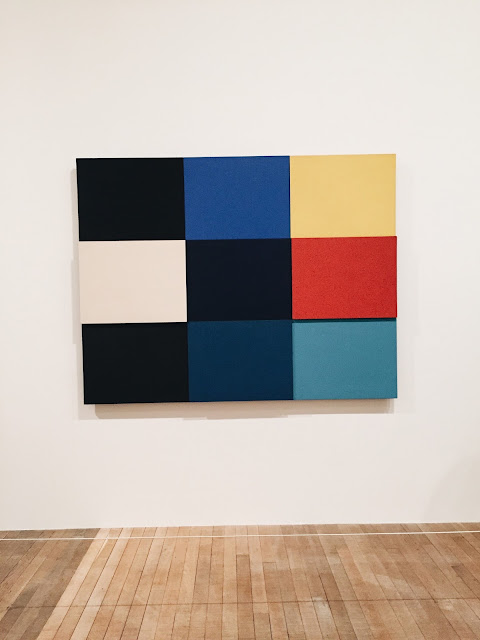 For example, in this painting above, the artist wanted to show how any colour could be paired with another colour. There was another painting of a few horizontal and vertical stripes with a red square in the top left hand corner, with the artist just wanting to make the red stand out in the painting. 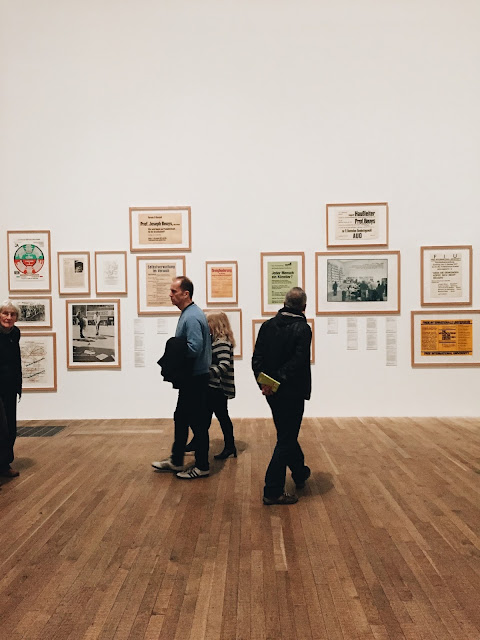 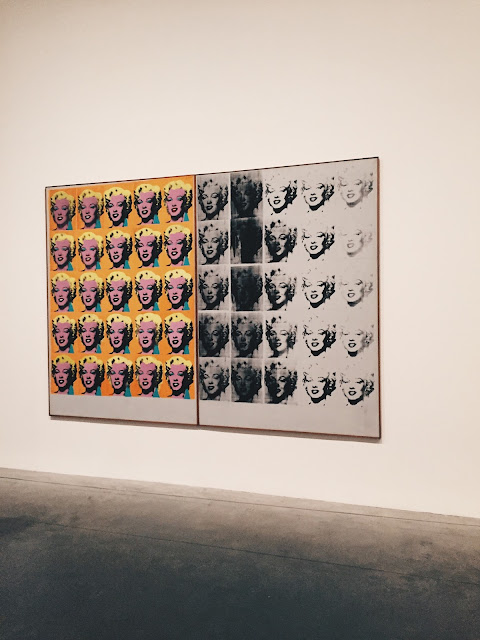 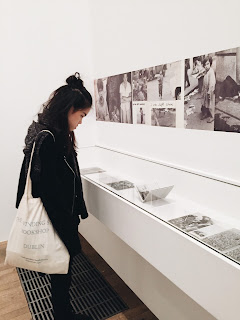 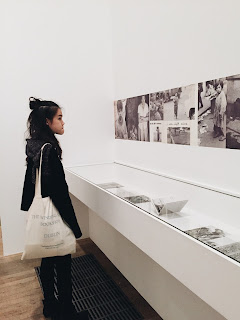 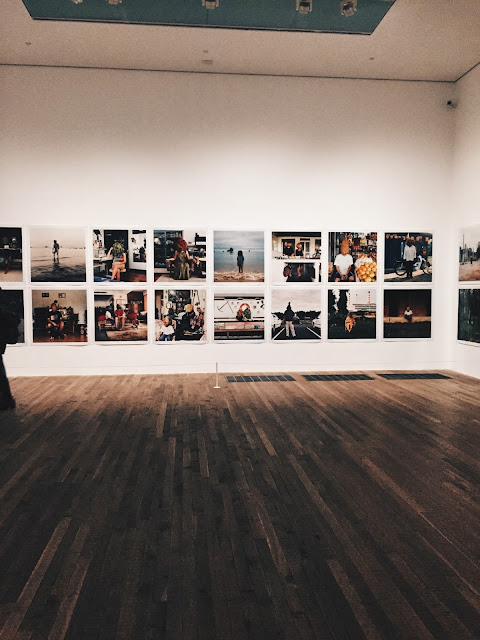 This exhibit was the most interesting of all and it was by a Singaporean artist who worked in Malaysia and in the UK, and he photographed people wearing fruit masks 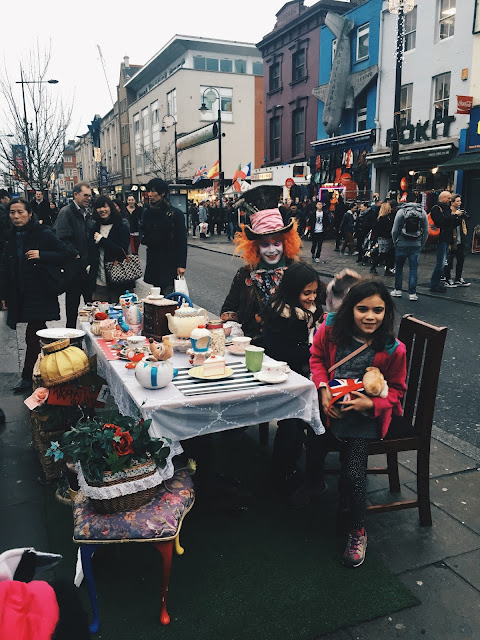 After the Tate, we all headed towards Camden Market and there was a Mad Hatter tea party happening along the sidewalk! The shops in Camden Market were so nice as they were as local handmade goods and vintage stores and Zoea brought us to a vendor selling rings and I got 2 which I am in love with! We then headed to the food market and I got a salad bowl kind of thing, a raw cacao coconut ball and tried some coconut pancakes which were so yummy! 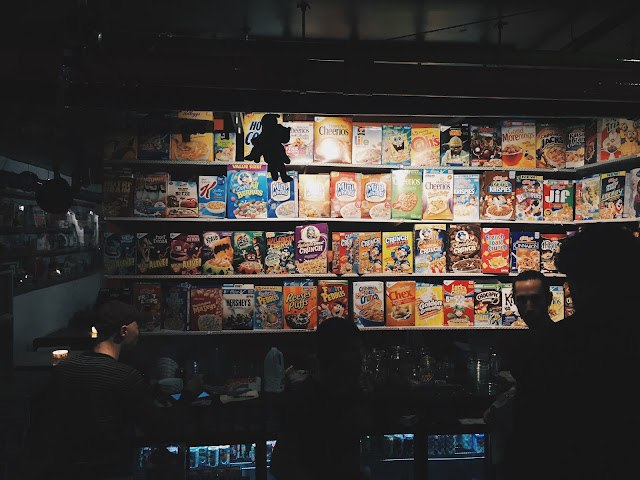 We passed by the Cereal Killer Cafe which serves - you guessed it - Cereal! 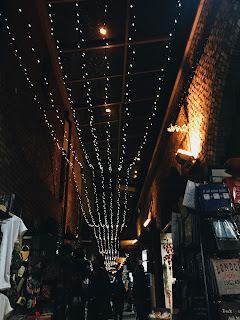 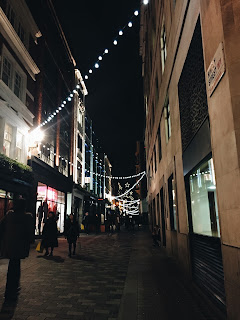 We then headed to SOHO to meet Catherine (another friend from work) for dinner! We stumbled into a lovely Spanish restaurant and had a really good chat :) We talked about Japan and their culture and how even though they had managed to survive so well throughout the years being a "closed economy" - as they don't expand as much as other countries due to the fact that they do not see the importance or the need to be speaking English in the 21st century, this is one of the reasons why their economy is going downhill. We also talked about how much the Japanese actually dislike foreigners and I really enjoy conversations like this because it makes me feel informed and it is just really interesting to be hearing the other side of the otherwise perfect Japan with their amazing food and amazing city and amazing people that I've heard so much about! 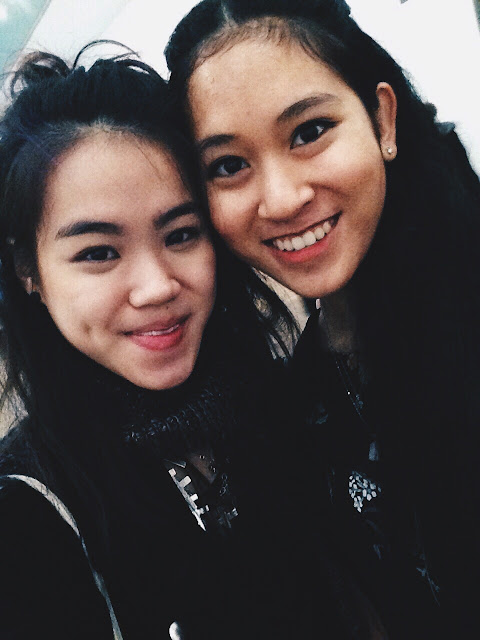 We met through work at TTP as we were both working in the same production and we got on really well from the first day we met. Personally, I find it quite rare that I can immediately be talking about more in depth issues with someone that I've just met and I'm so thankful for this friendship :') 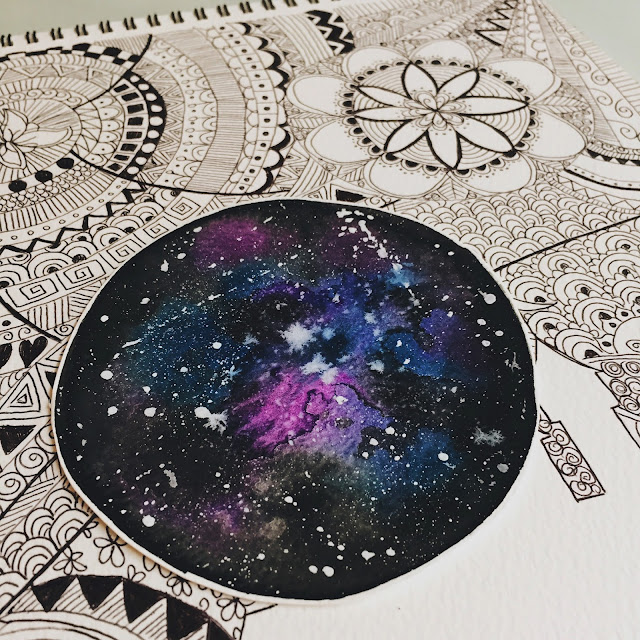 Did a little painting that evening 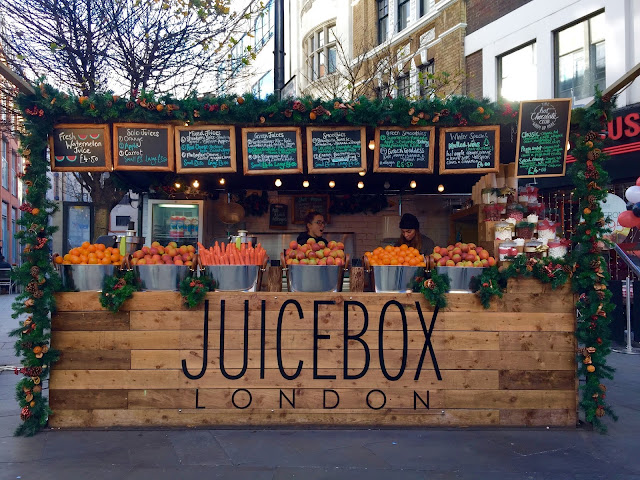 Went back to Oxford street and got myself a smoothie this time! (after getting 2 items at Urban outfitters but to be fair they were on 50% sale and I am making an effort to only be buying things that are on a substantial amount of sale!) 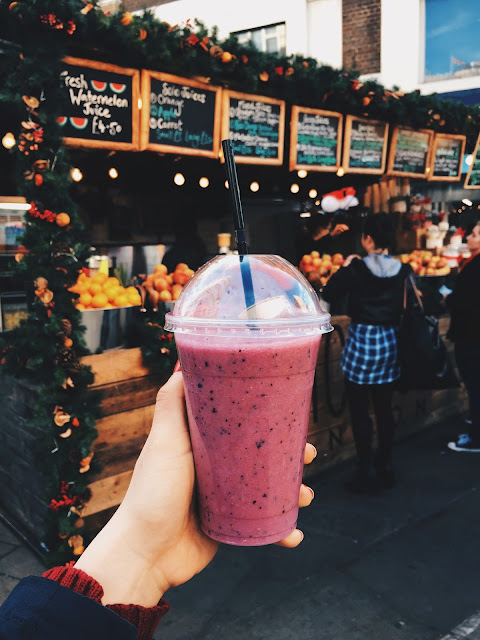 It had berries, coconut water and bananas and other ingredients which I've forgotten but it was not worth the 4 pounds :( I then met Catherine again to get stuff from John Lewis and then we met up with Windson for lunch. We then split again after lunch where I followed Catherine to get shopping done whilst Windson went to get his stuff and then we met up again for dinner and this time with Zoea and Ashleigh 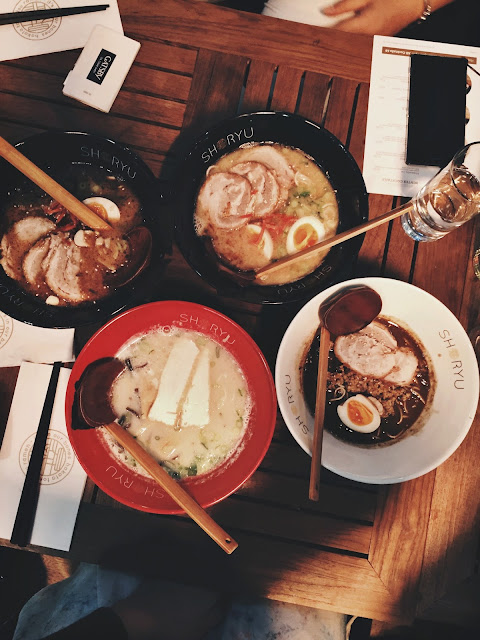 We had Shoryu ramen in Kingly Court at Carnaby Street and I had the White Natural which was the only vegan option and it was excellent!! I drank every bit of soup that was left and I was extremely satisfied with my meal and so were the others with their ramens :) 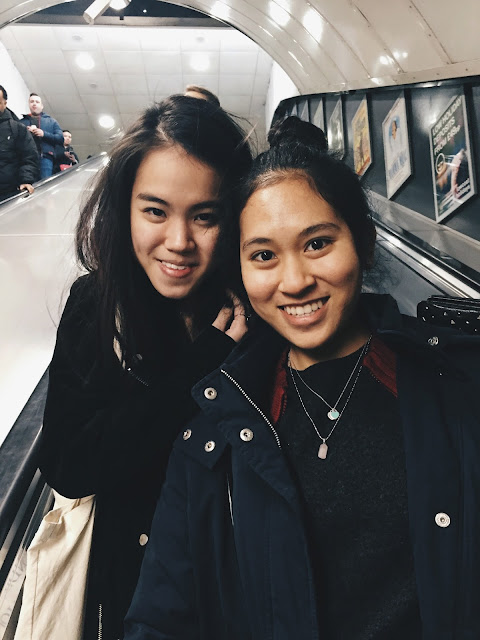 After dinner we then all parted ways to head back and I got on the tube with Zoea and Ashleigh for a stop before I had to change lines :( I really wish we had more time to spend together but I guess all good things must come to an end?

It was so nice seeing familiar faces from home these past 2 days and being in the company of friends after roaming around the streets of London by myself in the time since I've been here! Hopefully in the next few days I will make an effort to explore new places in London :)