We had such bad luck on the morning of NYE

2. Had breakfast at the flat and decided to check out the grassmarket as they have Saturday markets only to also find out that it was not put up that day :(

I was so bummed that Moon & Hare and the Grassmarket were both closed on NYE because I really wanted to bring both Justina and Natascha to these places!!! But I was comforted by the fact that both of them did not show a single sign of negativity towards the situation and looked at our situation in an "oh wells, there's nothing we can do about it so no point feeling down" manner - that made me feel a lot better :')

We then settled for a salad box at Graze - well the both of them did whilst I got an acai smoothie at Hula's ! We then headed back to the flat and Justina started doing last minute packing as she was leaving that afternoon :(((((( I then sent Justina to the bus stop at 2pm whilst Natascha rested in the flat as she was not feeling too well

I am really soooo grateful for the fact that my sister managed to visit me in Edinburgh to see my flat and to taste my cooking (which she enjoyed!!!) and to see this beautiful city that I call home till 2019! Her presence was so comforting and took me back to home in Singapore and I just love how we are equally happy being adventurous outdoors exploring the city and chilling at home. We have such similar interest and it just makes deciding on what to do together so much easier!

After returning to the flat, Natascha and I had sweet potato chips wrapped in sweet gem lettuce with tahini and maple syrup again!! Unfortunately Natascha was still not feeling any better and could not join my friends and I to see the fireworks that night :( 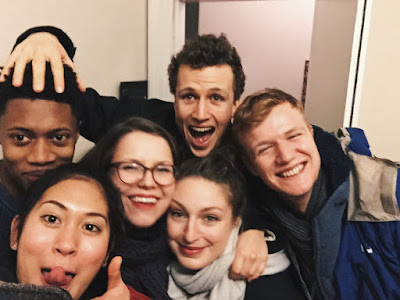 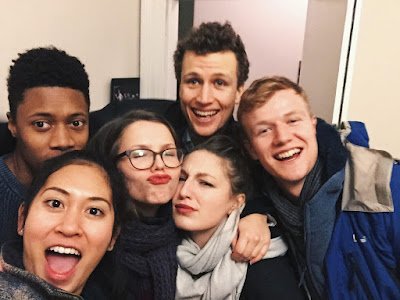 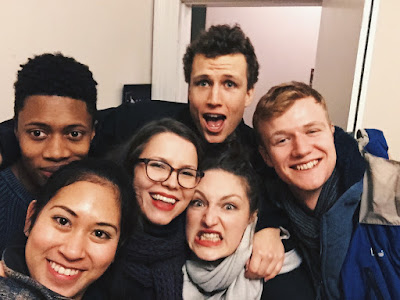 This was in Nic's flat and we have Topo, Kristiina (Topo's flat mate wearing glasses), Lyn (Kristiina's friend visiting from Germany), Nicholas (behind Kristiina and Lyn), John (Nicholas's younger brother) and me! 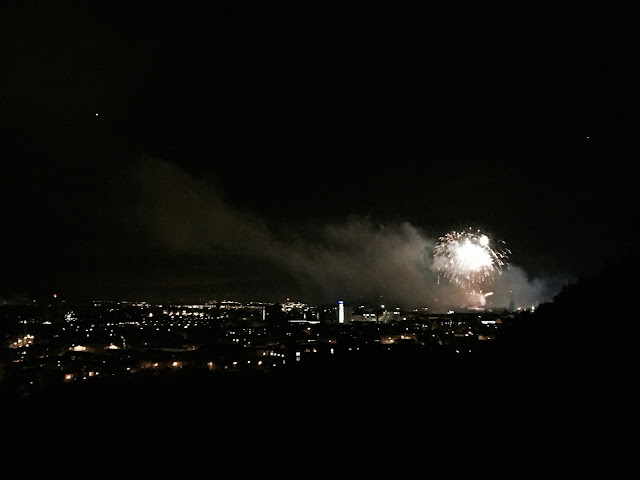 We headed up Salisbury's crags to catch the fireworks! It was amazing being up here at night and being able to see all the city lights and also because we were at an advantage point, we could see fireworks going off at different parts of the city, but of course, the Edinburgh Castle displayed the most extravagant fireworks

I feel like many people hype up New Years and almost expect everyone to have really grand plans for the evening and party really hard and if you weren't out and about on NYE then you weren't celebrating it right. But the best celebrations - any celebration in fact, I believe, should just be about doing whatever makes you H-a-p-p-y!! ☺☺☺

This could be you heading out and partying with your friends, or just being with family and watching the fireworks on the television, or even just being by yourself in your own quiet time (or even celebrating New Years on a plane like what Justina wanted to do!) - If people hear about your (anti - what society constructs your New year plans to be like) plans and go ' oh that was all you did for New Years? ', well you can just confidently say that you had a great time and that's all that matters!!

I'm just gonna swiftly move on to one of my life goals (since it's kinda related) which is to just stop caring so much about what other people think of me. It's really so hard with social media making it so easy to compare your life to others with the the artificial construct of their oh-so-perfect-and-infinitely-happy lives that they portray. A simple example would be all my cousins thinking that I don't study and all I do is climb Arthur's seat and have fun because that's all they see on my social media, and I always reply: Who would post a picture of them studying??

It is hard but it is crucial that we constantly bear in mind that everyone has their own struggles and nobody in the world is perfect and that's just how it is! So we cannot be caught up in the constant comparison of one's life to another and I believe that once you've achieved this state of mind/way of thinking, you will feel so liberated!!! And that's really one major thing that I wanna achieve ☺

Ok now swiftly moving on to continue my post of New Years day !

Both Natascha and I were feeling weak and ill and accomplished close to nothing as compared to our intended plan of a full-day's packed worth of activities: 4 items to bake, watercolour painting, movies! We did leave the flat to get groceries, and we both much appreciated getting some fresh air, and baked almond coconut chocolate cookies (deeeelish!!) and made sushi for lunch! 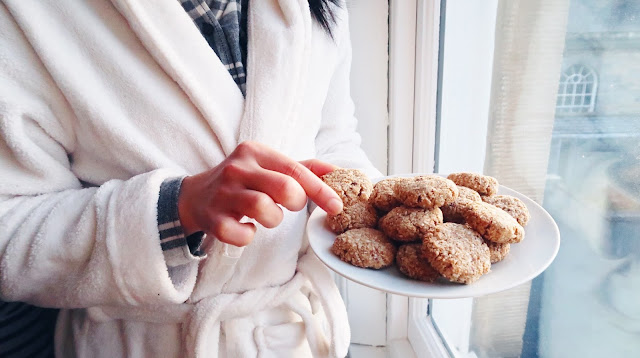 If I do recall correctly, we both had a cheeky nap after lunch but after waking up, we had sushi again for dinner whilst watching Jane Eyre. The movie was meh but the cinematography was impressive! After the movie, we chatted for a bit and both got ready for bed. I was surprised how easily I fell asleep despite having slept so much earlier in the day - but I guess that's what the body is craving when you're ill!

Despite New Years day being uneventful (in comparison to our original plans), looking back at it now, I really did enjoy it - of course not the feeling ill part, but just being in the company of an amazing friend and having a very relaxed day with yummy food was really all I needed to be happy!

I can't believe I'm already into the second half of my second year at uni!!

✨I will try my best to make 2017 another amazing year✨