The coming series of blog posts is a recount of my 3.5 weeks of adventures in California and Nevada!

After a flight to London from Edinburgh, we arrived in SFO at 2pm and headed straight to our hostel after getting through the airport. Mistake #1: We took a city taxi instead of an Uber and it cost us 47 US dollars to get to our hostel and on top of that the taxi driver took it upon himself to reward himself with a $8 tip?! I knew there was a tipping culture in the USA but I was so shocked to realise that taxi drivers were meant to be tipped 15% as well! We later found out that we got scammed and he probably took advantage of the fact that we were tourists. It was rather funny at that point in time because both of us were just so confused after Topo passed him $60 expecting change and the driver just took it and said thank you and then got out of the cab to help us with our bags.

Anyway, we arrived at Music City Hostel - a hostel was the cheapest option we could find shockingly enough and it wasn't even that cheap as it cost us £33 a night! That is way higher than UK hostels which average at £15-25 a night. The hostel was nice and clean with great hot water in the showers and there were cleaners to make our beds daily!

We decided to have a relatively relaxed day of exploring and our first stop was to China Town, just a 20 min walk from the hostel. It was unlike any other China Town that I have been to! It was so authentic and it was like you were actually in China! The Chinese Vendors were just minding their own businesses, not trying to coax tourists into buying their products and they did not put up a especially friendly front when you were purchasing their products, which I really liked! We purchased a box of jackfruit and boy was it yummy!! So glad that Topo gave Jackfruit a second try and really liked it this time :)

After China town, we walked to Fisherman's Wharf and watched 2 street performances, which were rather entertaining and had dinner at Chipotle before embarking on our 40 min walk back to the hostel. About 15 mins away from the hostel, we heard loud cheers from a bar across the road and we saw that they were playing the NBA game of the Golden State Warriors against another team, which Topo was hoping to be able to catch when we got back to hostel and we decided to pop in to watch the game instead! It was an amazing atmosphere to be in because everyone in that bar was supporting their home team and cheered loudly in unison whenever the Warriors scored :) 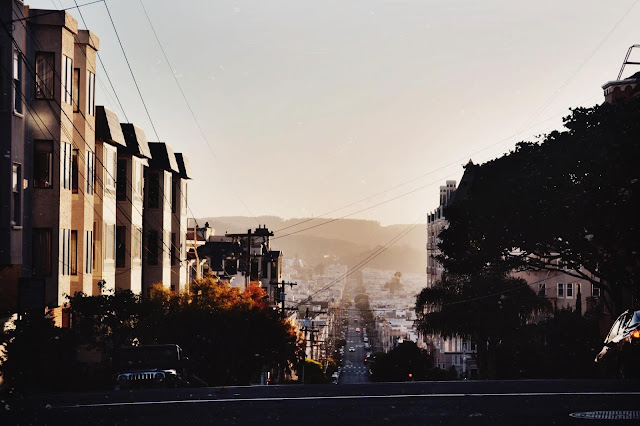 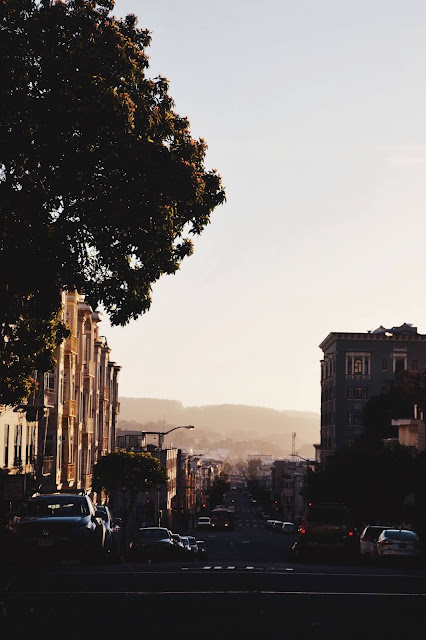 Took these pics on our walk back to the hostel after the game finished!

Back in the hostel as I was getting ready to take a shower, a room mate walked in and she asked where I was from and we soon found out that we were in the same year at the same uni?! What were the chances!! Her name is Sasha and she's from London and we ended up spending the next 2 days together with her friend Maggie from Canada.

The next morning started with a healthy breakfast at Nourish Cafe just a 3 min walk away from the hostel - how convenient! I had a not so aesthetically pleasing but very tasty and refreshing green smoothie bowl and a Blue Majik latte, who's taste was unfortunately overpowered by the coconut milk. 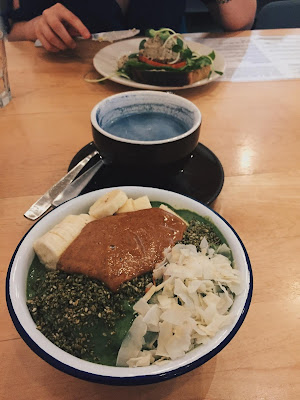 We then headed to Golden Gate Park, a huge urban park in San Fransisco for some sight seeing! 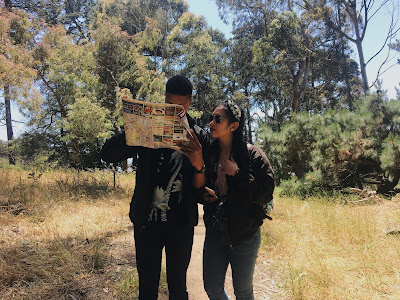 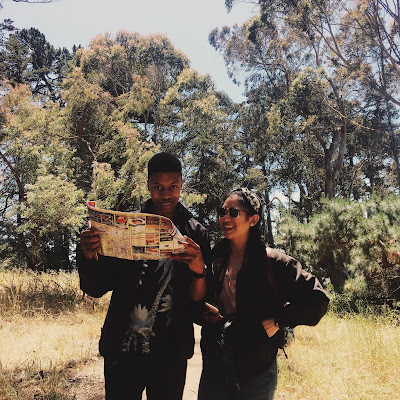 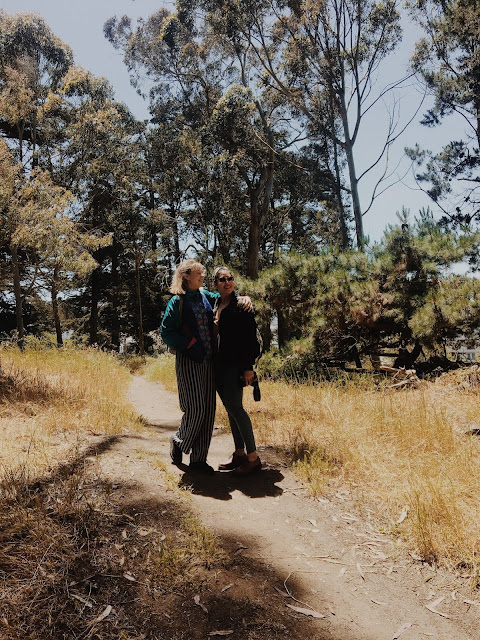 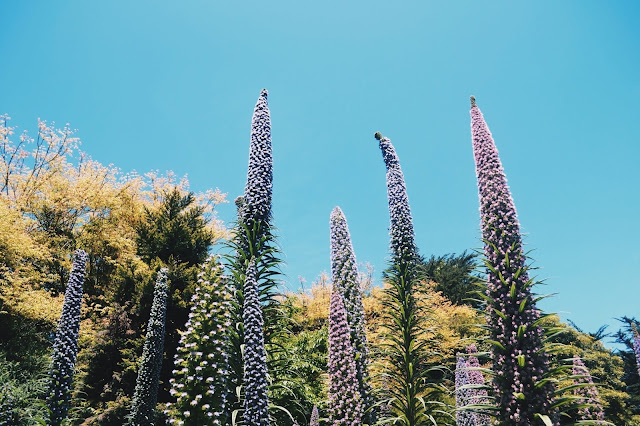 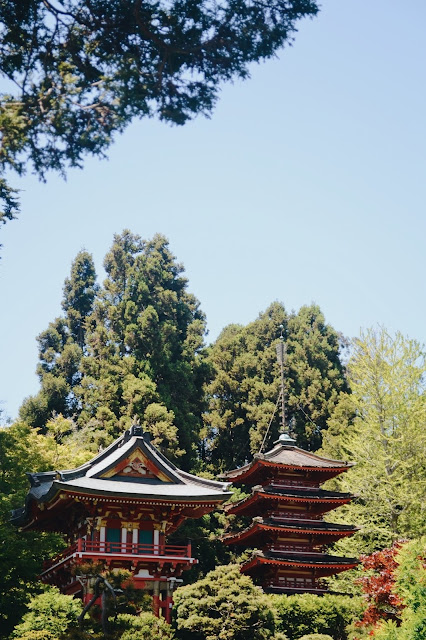 We decided to check out the Japanese tea garden, which was not free but was worth the $9! We managed to catch a free tour just in time and I am 100% positive that the tour made the experience worth it because the guide explained the history behind the garden, which would make one appreciate it so much more! 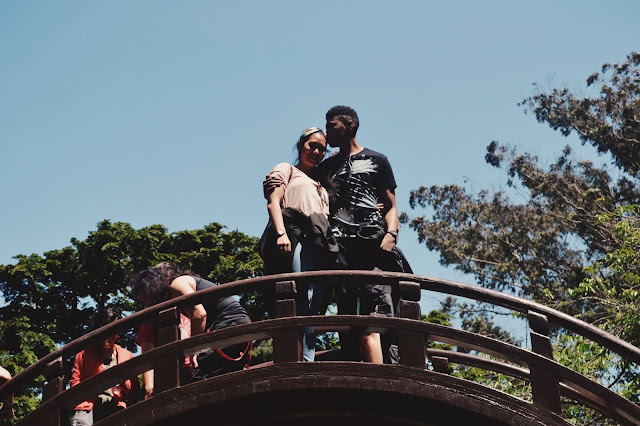 After the tea garden, we bought lunch from food trucks just across from the Japanese Tea Garden and enjoyed it whilst listening to the Golden Gate marching band! 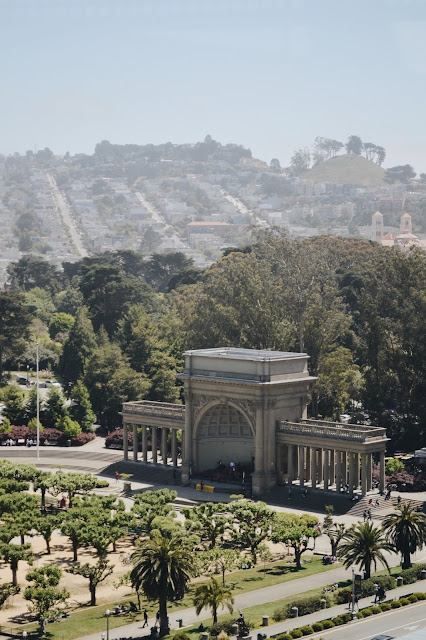 They were playing in the dome-shaped area :) 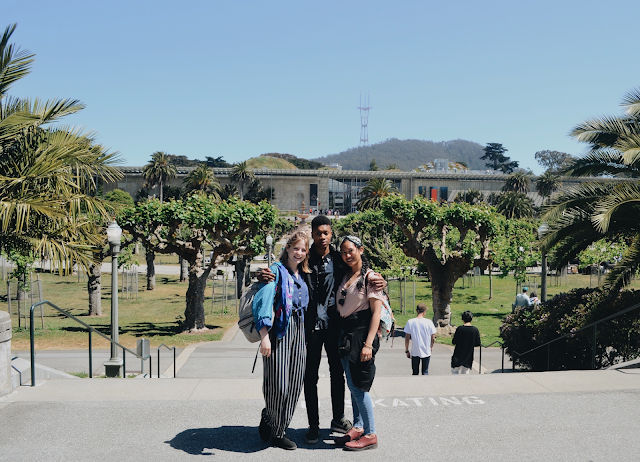 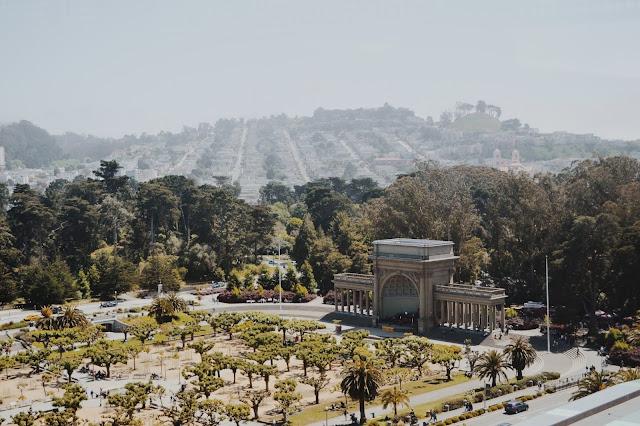 Unfortunately, the entry fee for the 2 museums - de Young museum and California Academy of Sciences were too expensive for us to enjoy them. But we did manage to get free access to the roof of the de Young museum, which provided a breathtaking 360 view of the city and where I took the above photo! I loved how you could see the rows of steep parallel streets in the distance. 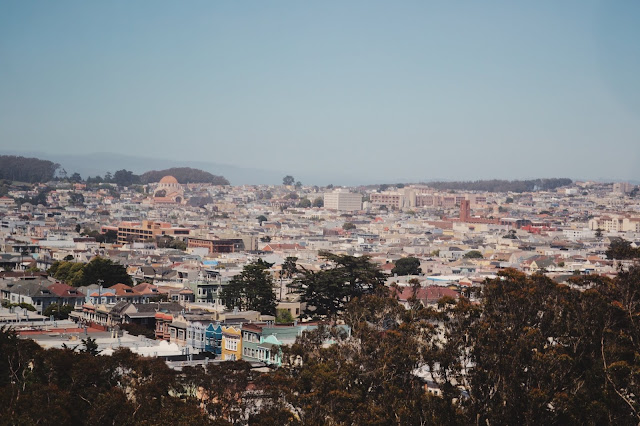 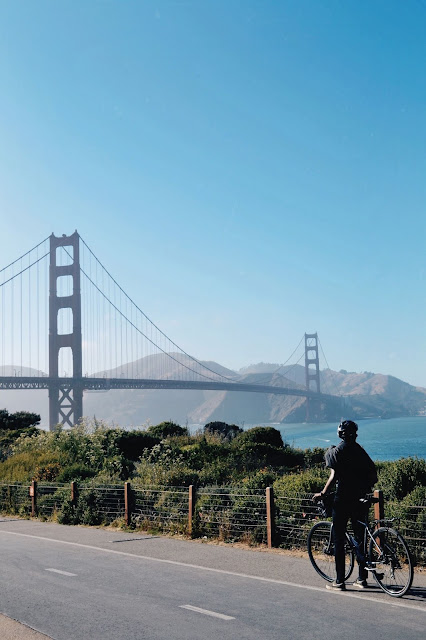 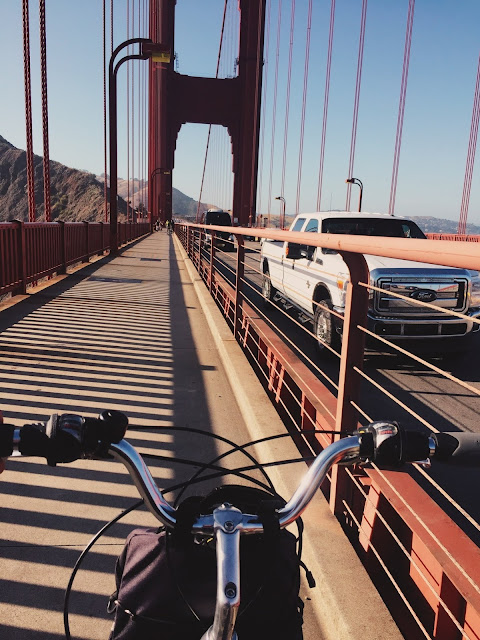 and we made it! 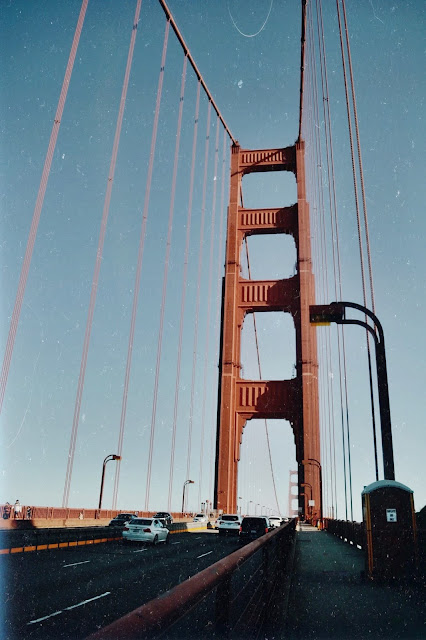 Cycling across the bridge was so much fun! 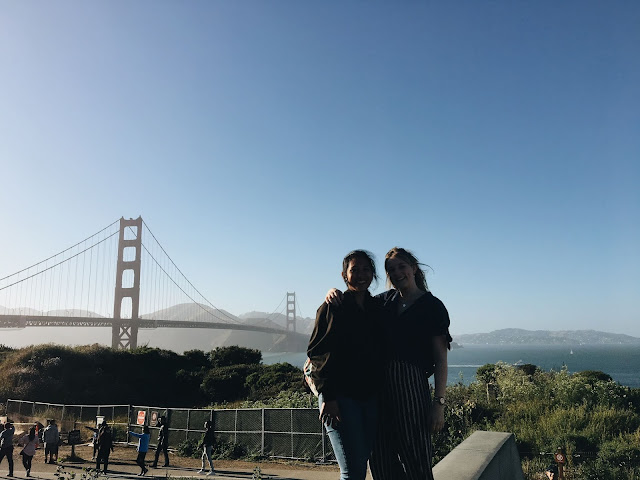 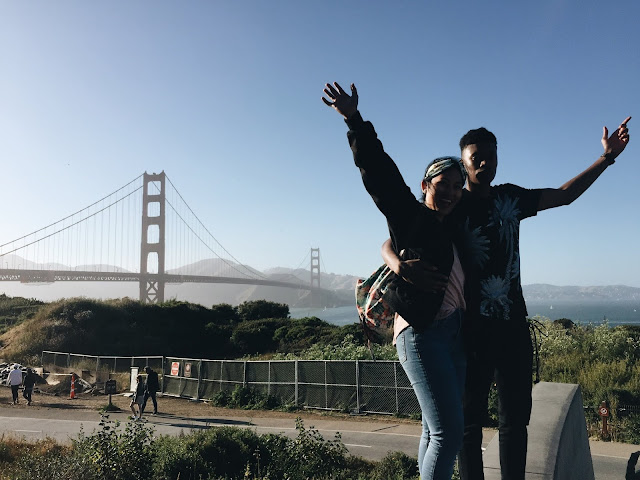 After returning the rental bikes, we uber-ed to Gott's Roadside where we met Maggie for dinner and Topo and I both had the Impossible burger, it honestly tasted just like beef it was unreal!

We headed back for dinner and had a really chill night chatting to 2 other guys at the hostel :)

Maggie and Sasha had left for a tour to Alcatraz Island so Topo and I did some exploring alone in the morning. We started with breakfast from Trader Joe's, which was across from Nourish Cafe and I also grabbed a yummy dragon fruit smoothie from Nourish Cafe and we headed to the Palace of Fine Arts 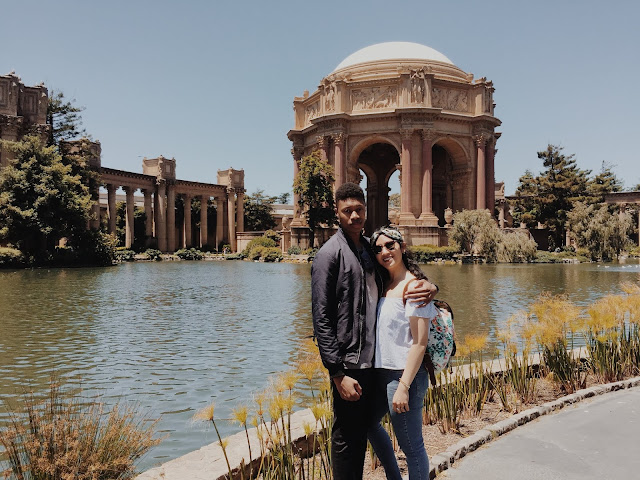 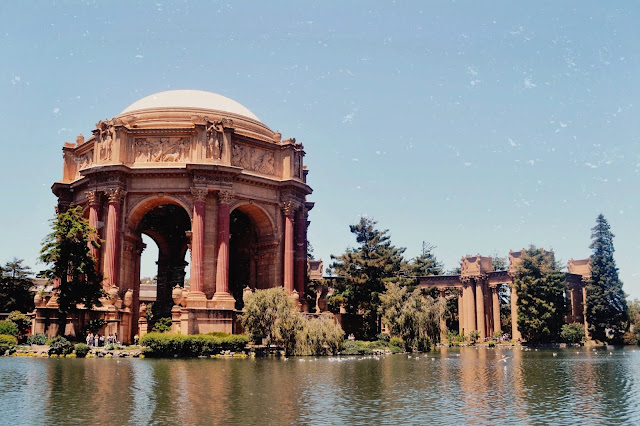 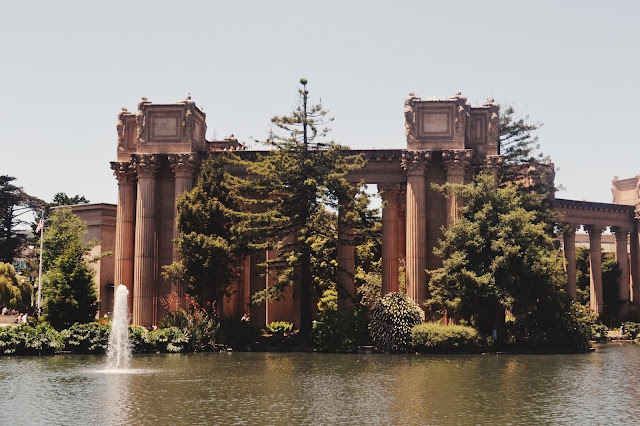 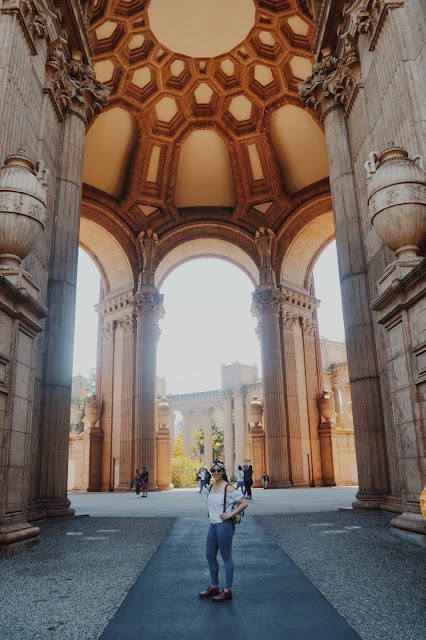 It was such a beautiful place :')

We then met Maggie and Sasha at Pier 39 and we then walked to Lombard Street - famously known for being a steep windy road on the pictures of post cards and managed to get an uber to take us down the street on the way to our next destination - Alamo Square where the painted ladies were (a famous row of houses). 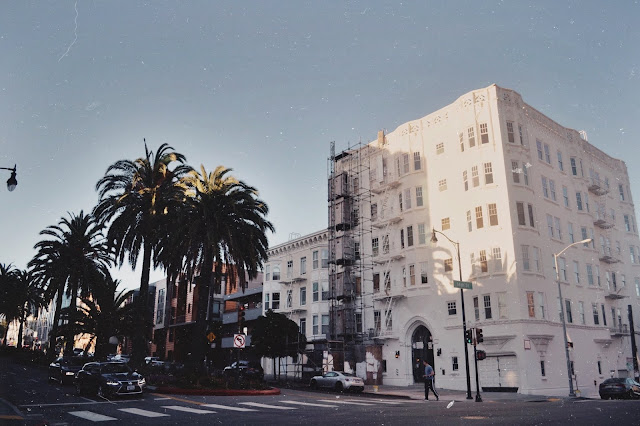 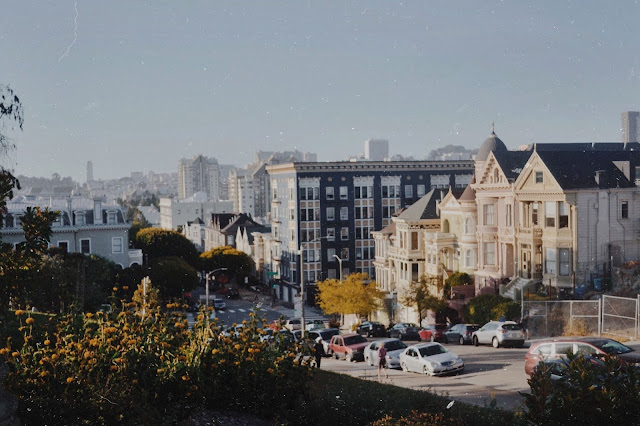 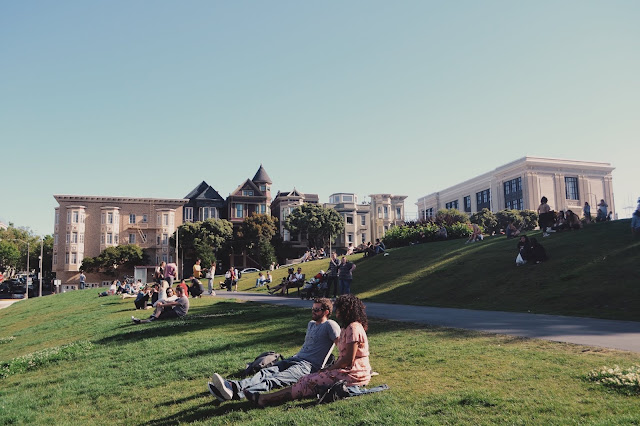 We spent about an hour here lying on the grass before we headed for dinner at a Shizen Japanese restaurant just a 15 mins walk away. Also got these lovely pictures below before we headed off! 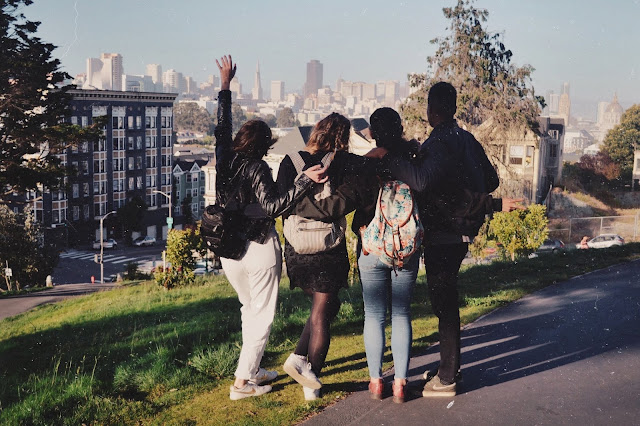 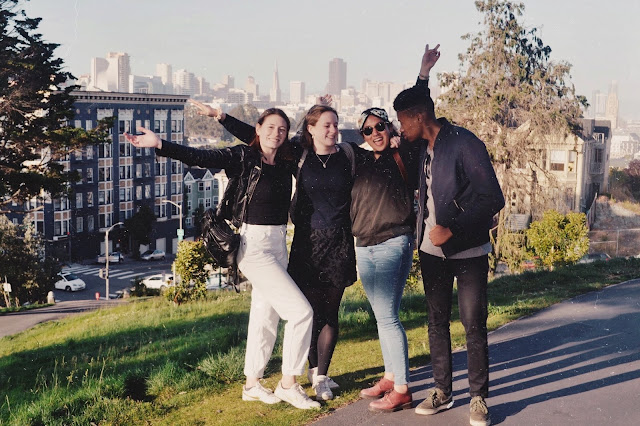 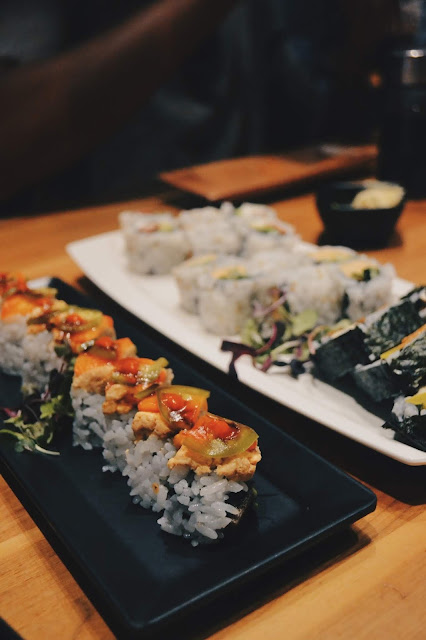 The food was so yummy and worth the hour and a half's wait in my opinion!!! We scoffed everything down without speaking in a matter of 15-20mins (maybe even shorter) and headed back after :)