(she's my cousin on my dad's side of the family, she studies in UWC in Maastricht, we're the same age and we don't meet up often but when we do, it's like as if nothing had changed)

I got to Waverly Bridge bus stop to pick Nadira up at 1pm on Sunday, hugged and squealed and just couldn't believe that this trip was happening, went to Sainsbury's to get some yummy cereal and milk and then headed to Kalpna for lunch! It was an Indian vegetarian restaurant and we shared garlic naan, lentil dahl, an aubergine dish and basmati rice - yumyumyum 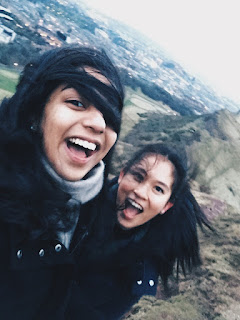 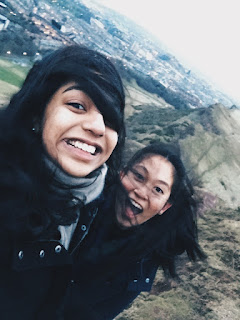 After settling down, we decided to head up Arthur's seat which was a little crazy of us seeing that the winds were insanely strong but I'm glad we went up anyway and we actually did quite well climbing quite a distance up the hill! 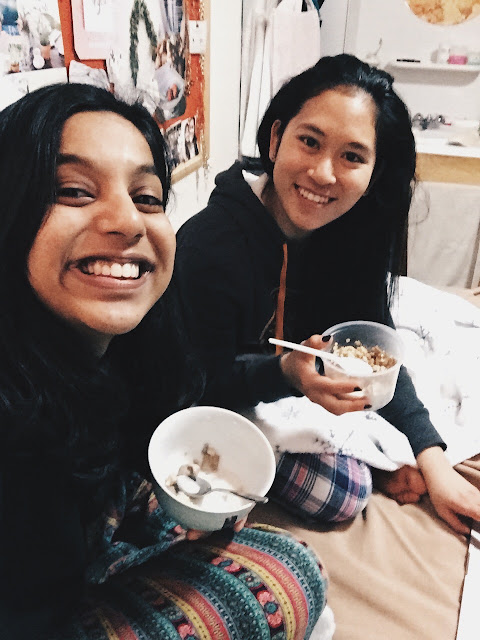 Then we decided to have a chill night in since we were still a little full from lunch but we got hungry a few hours later and had cereal for dinner cos why not! 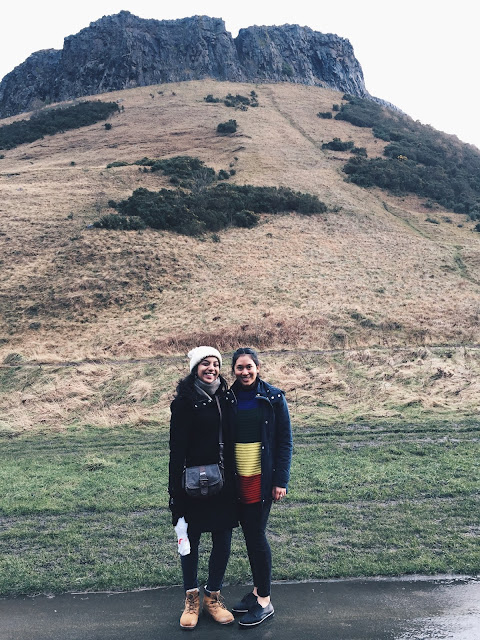 I decided to ditch a whole day's worth of lectures (ok there were only 3 so no biggie) so that we could hang out together! I have no idea why I didn't think of this before but I'm glad I did - better late than never!! And so first stop of touristy things to do that day was to visit Holyrood Palace ! 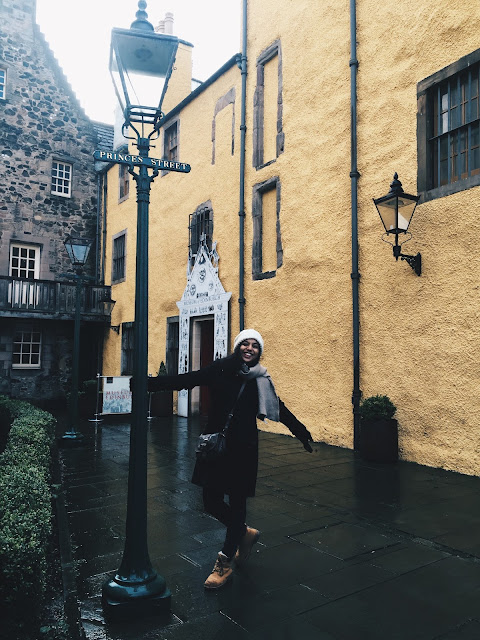 Turns out you had to pay to get in the palace so we just wandered around the area :) 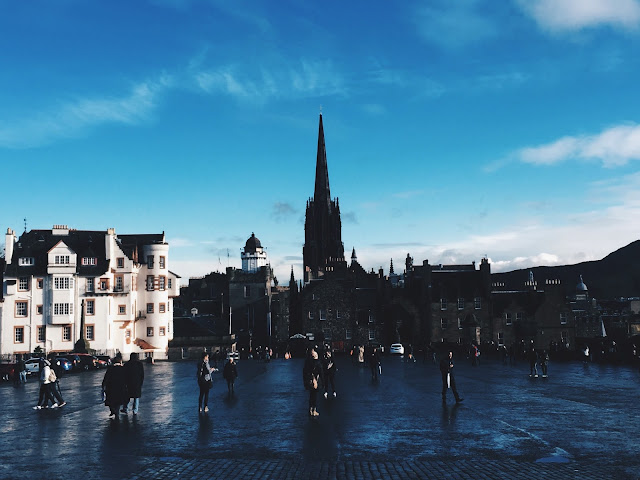 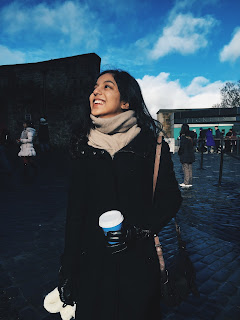 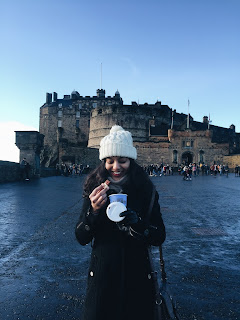 Nawww, love these photos of my cuz :') 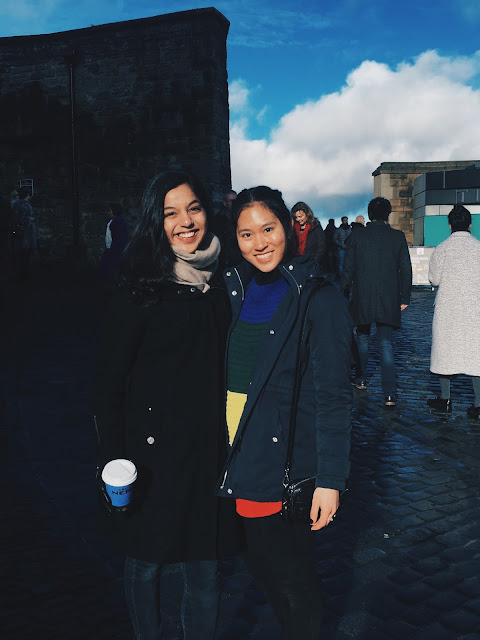 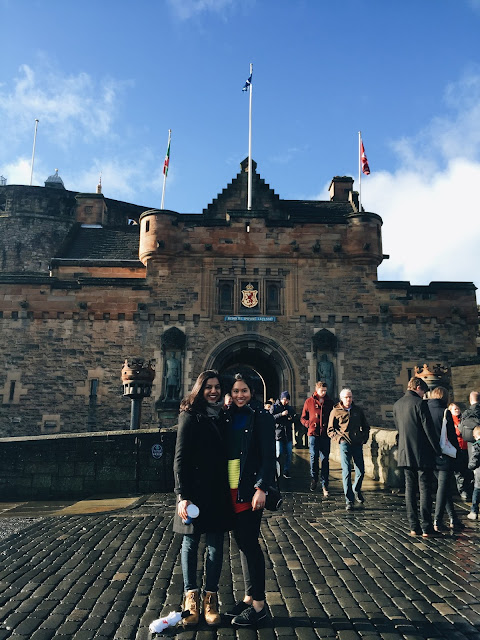 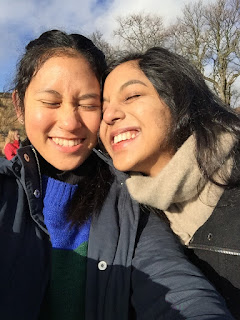 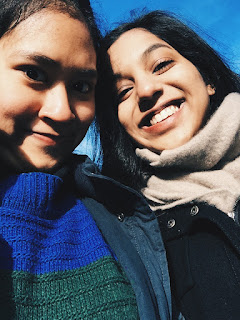 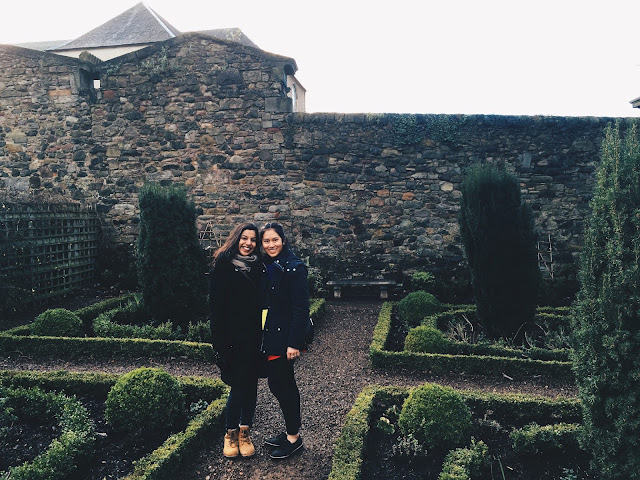 Next, we headed to Dunbar's close garden which is apparently a hidden gem of Edinburgh! It was just a tiny garden which was still rather pretty but I'm sure it'd more beautiful in the summer 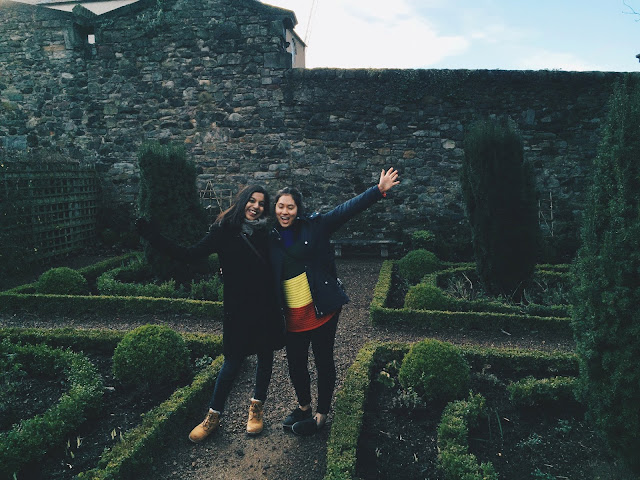 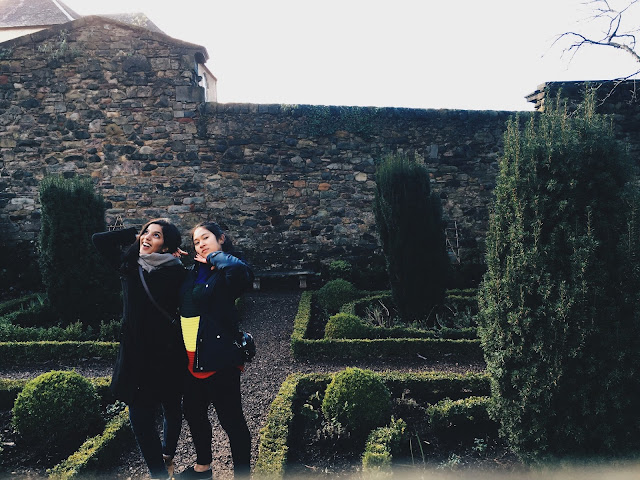 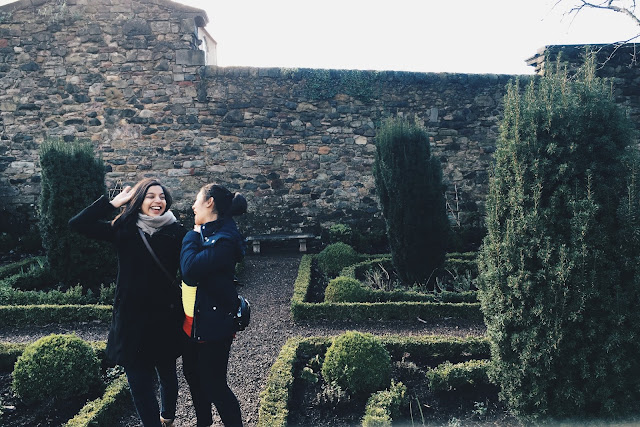 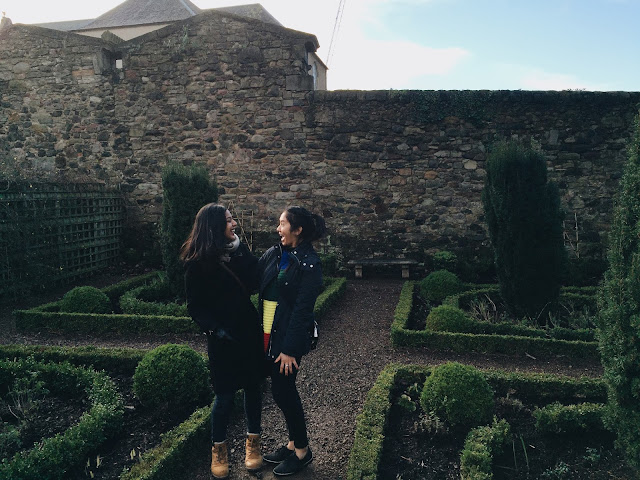 (We tried to laugh naturally but I just couldn't hahahahaha) 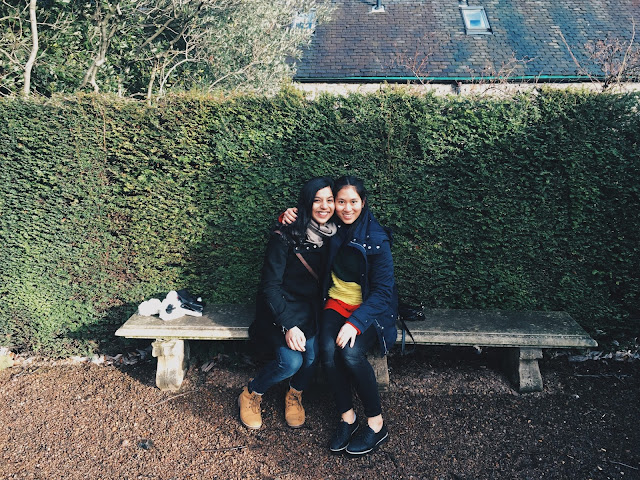 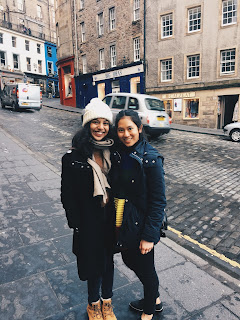 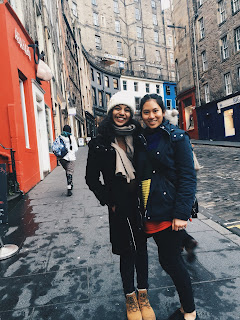 Stop 4: Grassmarket! There was nothing much going on cos the actual market is only open on Saturdays, but I just like the whole feel of this area plus there are so many little local shops here that sell the cutest things! 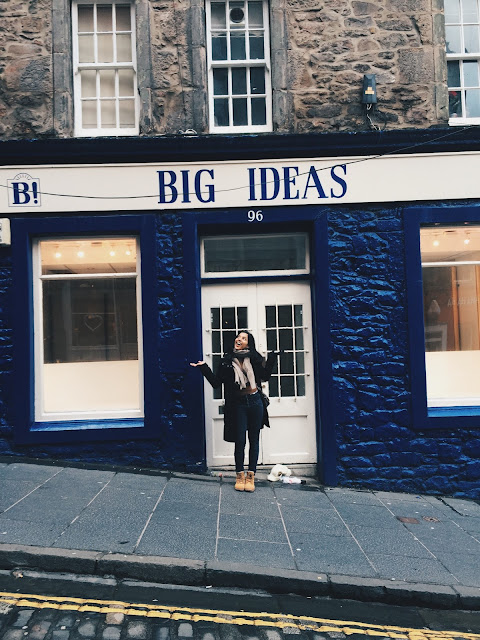 After the Grassmarket, we headed to the Museum of Childhood but we left after 10 minutes because we couldn't really relate to the toys since it was a Scottish childhood kind of thing, and so we went to the National Museum for a bit. On the way to the museum, we were just asking each other what our favourite cuisine of food was and Nadira chose Thai whilst I chose Indian (its not my absolute favourite but I do love Indian food) and 10 minutes later, we came across a sign that read " Eat all you want Thai and Indian buffet for £7.95 " !! What were the chances that we would chance upon a restaurant like that! So naturally, we went for it and the buffet was really worth it :) We also managed to FaceTime our parents there which was nice! 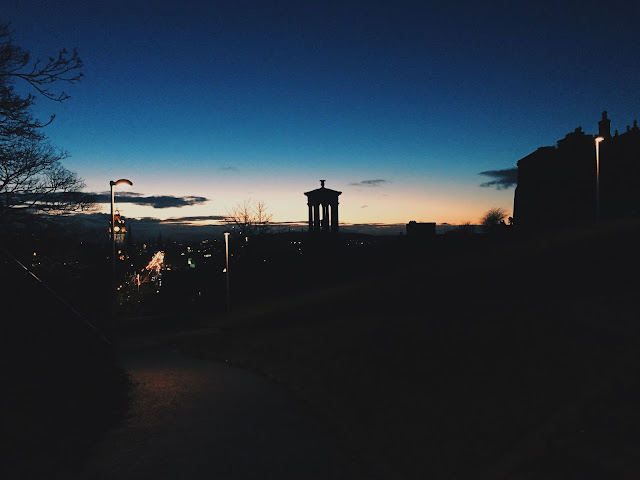 Last stop was Carlton Hill! I've only been here once in the day when it was nice and sunny, but coming here at night was totally different yet equally magnificent, if not more magnificent! With the city lights and the hint of sunset on the other end of the city, it was so beautiful :') 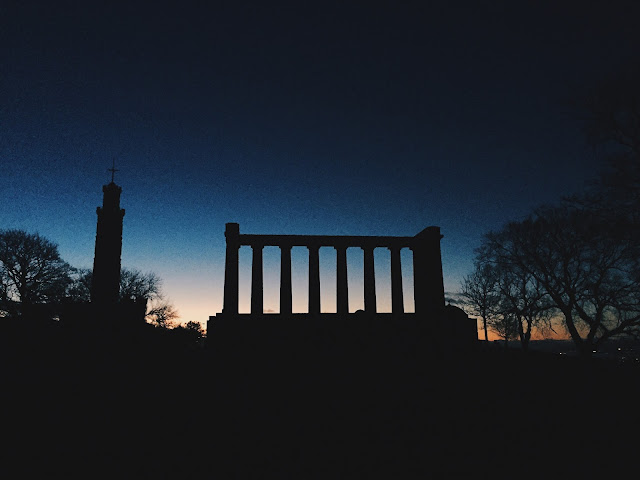 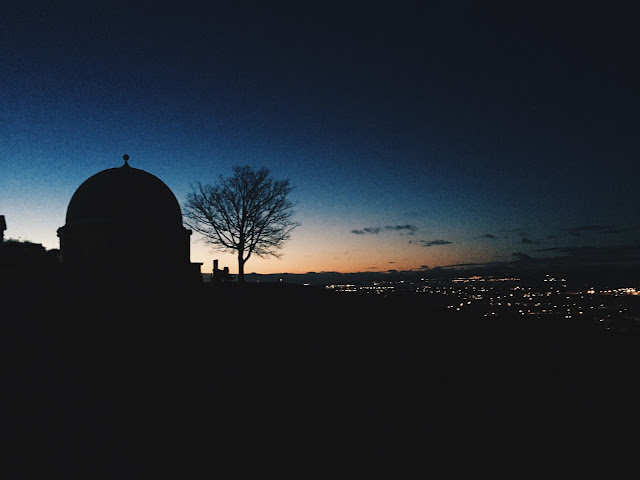 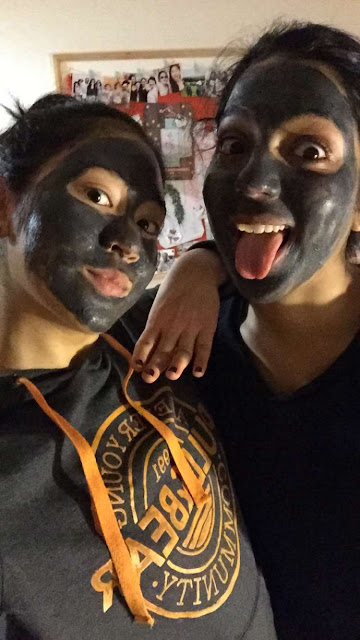 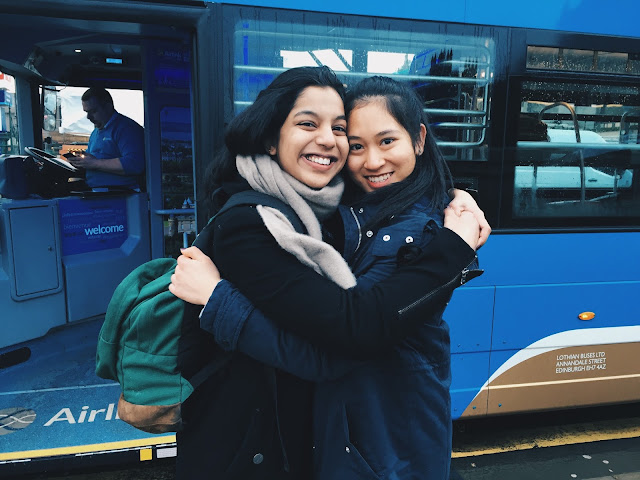 The next morning, we got up at 7:30 and then had breakfast and got to the bus stop :( 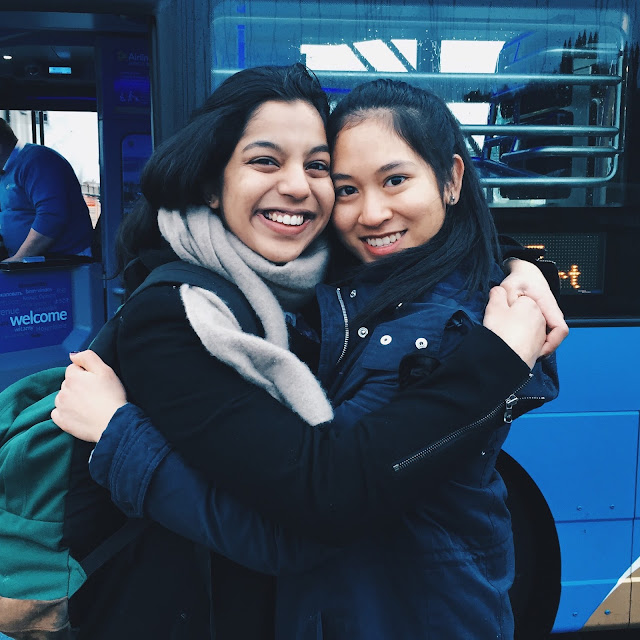 From the sneaky little gifts here and there, to realizing how similar we both are in terms of personality and our views, to conversations that flowed so smoothly, I am so so so thankful for these 2 precious days that I had with Nadira. She brought up the fact that we live such privileged lives and that we should never forget that and I couldn't agree more!

I really hope my exam schedule fits such that I can fly down for her graduation in May but till then, see you soon Nadira, I love you <3