We arrived at Oxenholme station at 11:08am and got the 11:20am train on the opposite platform to Windermere ☺ (which we didn't get tickets for because we didn't know that we had to take a train to Windermere but no one checked so YAY)

The town of Windermere is really quaint and pretty and despite it being far smaller than Liverpool, Topo and I loved it so much more after just 5 mins of walking through the town 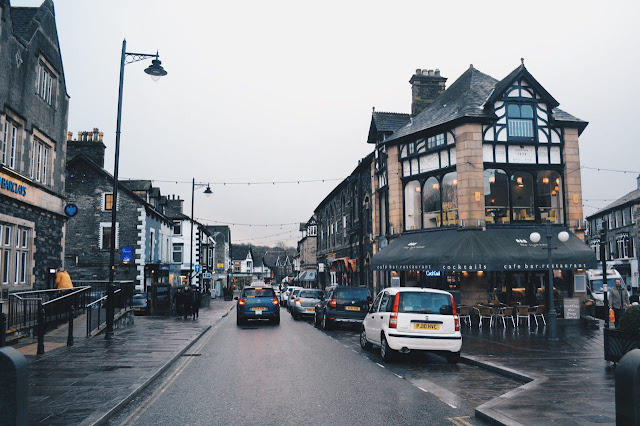 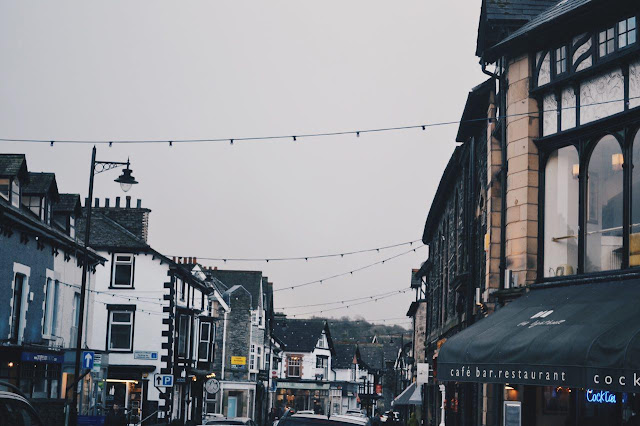 We saw a really modern (hipster even) looking cafe called Homeground amongst the older restaurants and decided to have lunch here. Unfortunately, they were really limited on vegan options and I had to choose between Sourdough toast with Jam or a superfood salad. You might think a superfood salad would be perfect for a vegan and yes it is, but I am not one who would buy salads in cafes or restaurants (unless it was a salad bar for e.g. SaladStop!) because I feel it's never worth the money. But because my options were limited and I felt toast would be a worse off option for its price, I decided on the Super food salad with tofu for £9.

IT TOTALLY EXCEEDED MY EXPECTATIONS. These tofu pieces were massive (I would even suggest advertising them as 'tofu steaks'!!) and there was a generous heaping of guacamole and the tangy dressing on the salad just accompanied everything perfectly. I was so full by the end of my meal but so happy!! 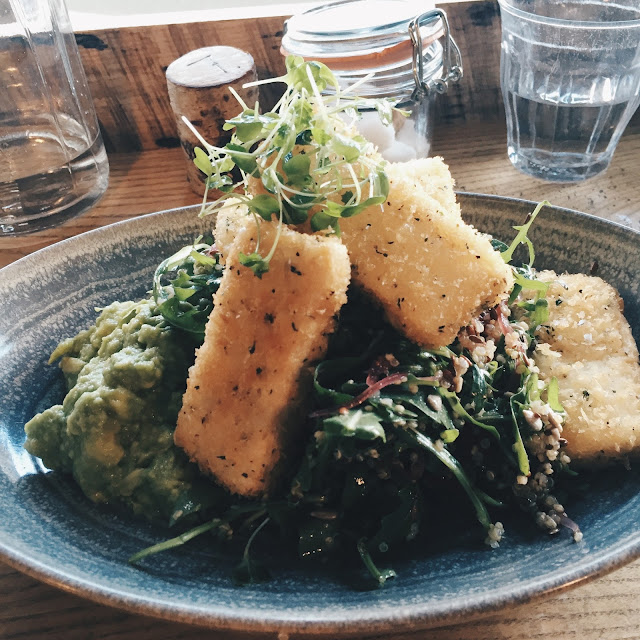 After that insanely satisfying meal, we headed to Fell View Guest House where we were staying for the next 4 nights. As google maps guided us there, we realized that Fell View was in another town, Bowness-on-windermere, which was a 30 minute walk from the train station. Bowness-on-windermere was much smaller than the main town of Windermere, but it still had the necessary amenities (Tesco and Sainsbury's included, which was much appreciated). We met with Sarah, the owner of the guest house, who very kindly showed us our lovely room - it was the perfect size, very clean, the bed looked really inviting and you had to walk down a few steps to the en suite bathroom which I thought was really cute. Topo and I were both so impressed with the room in comparison to the not-so-nice airbnb we had in Liverpool (now I wished I had taken photos of the room ☹ )

We then dropped our bags and headed to explore Windermere! 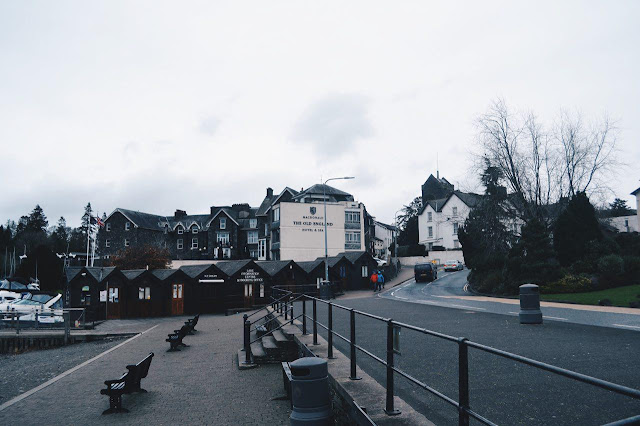 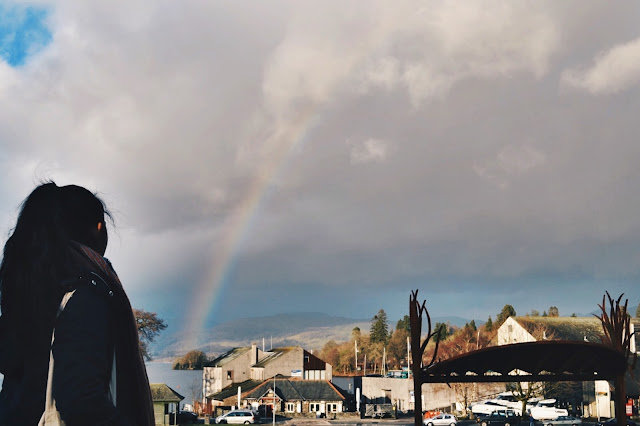 We saw a 🌈!! They make me so happy and I just can't stop smiling to myself and admiring them whenever I see them ☺ 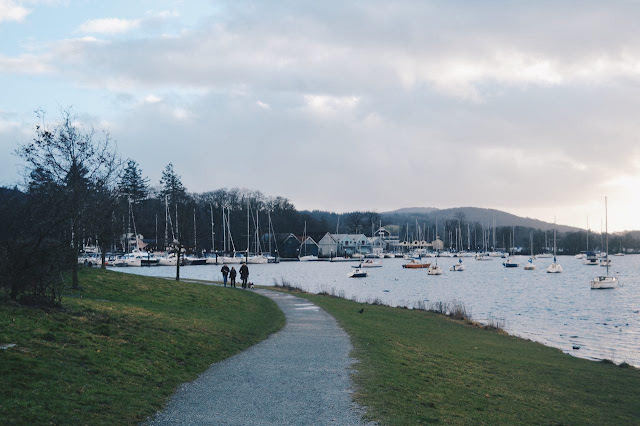 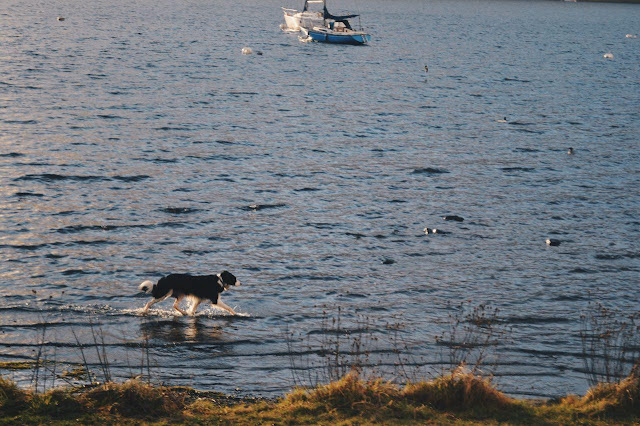 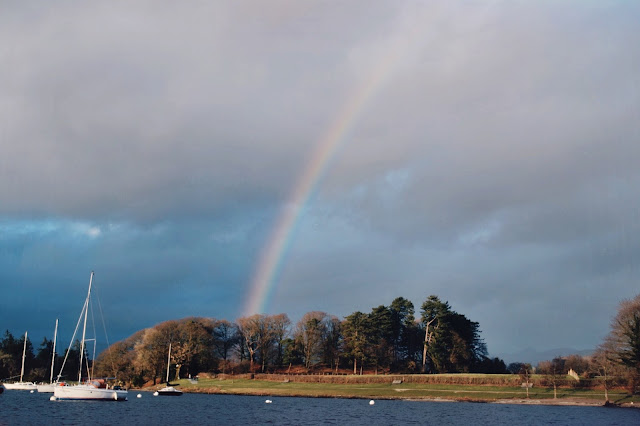 And then we saw another rainbow!!!! We were so lucky!!

I took so many photos of it which was really unnecessary because they all look the same but you know there are times where you see something so beautiful and you snap a thousand pictures of it and then you regret when you look back at your camera roll because now you have to delete like 997 of them?! Yeah that was me. 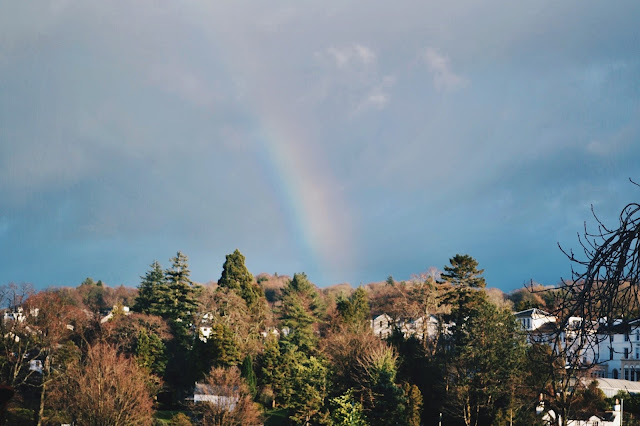 This was the other end of the rainbow :') 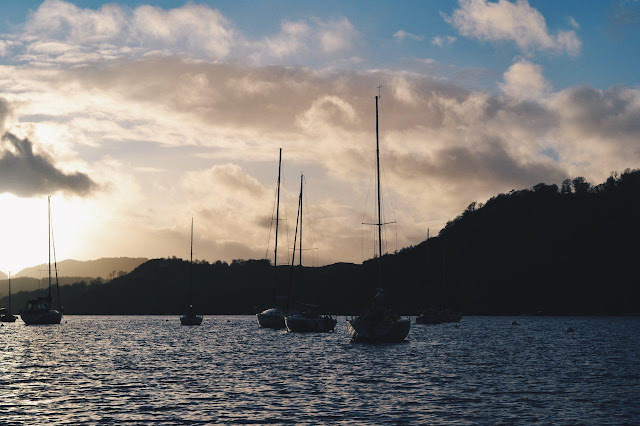 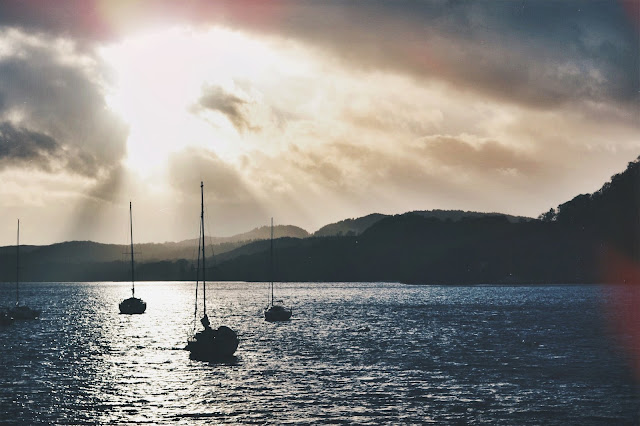 We walked to one of the jetties and sat down with our legs dangling over and the soles of our shoes just touching the calm water surface. A swan came to accompany us for about 5 minutes and I tried feeding it seaweed that I had but it declined and at some point it got so close I felt like it was about to attack me but then it just swam away 😅 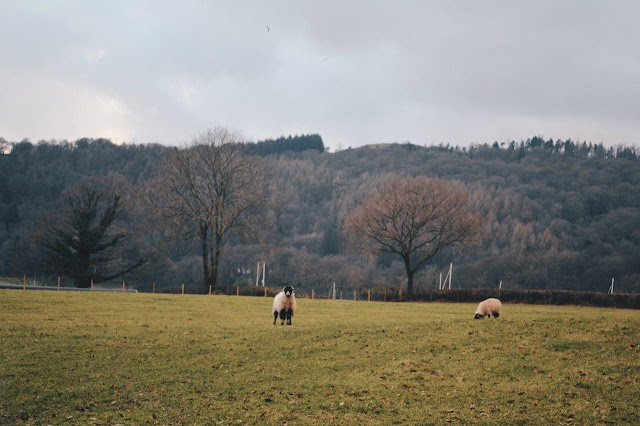 After a lovely walk round the lake, we stopped by Tesco to get food for breakfast and dinner for the coming days as it was not provided in the guest house (but snacks were, that could be refilled which was really nice!). We settled for toast, jam, cereal, bananas and soy milk - yes, we had breakfast for dinner, but I would gladly do that any day!!☺There was an asparagus flavoured cup-a-soup in the room but it wasn't vegan friendly, but Topo had it and said it was quite good!

The next morning, we went for a woodland trail walk where we breathed in the cool, crisp air and appreciated the beauty that nature had to offer - a perfect start to the day. 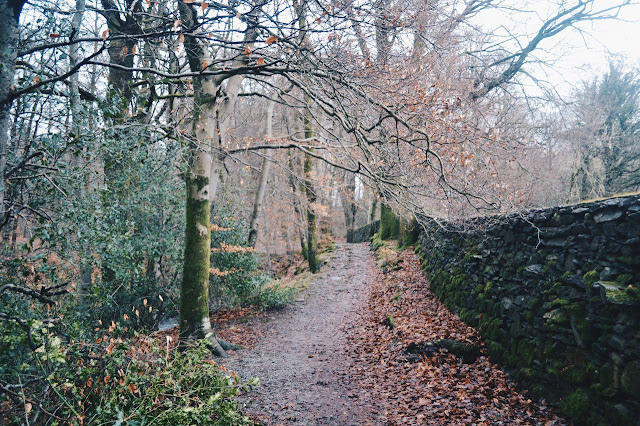 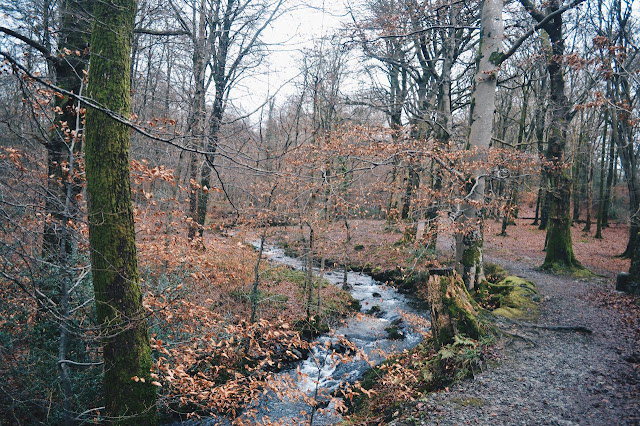 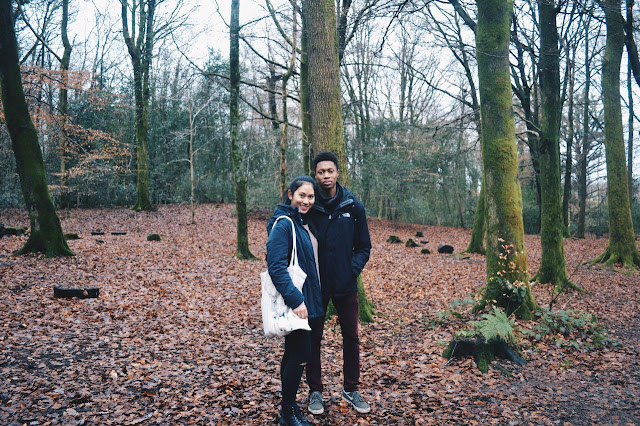 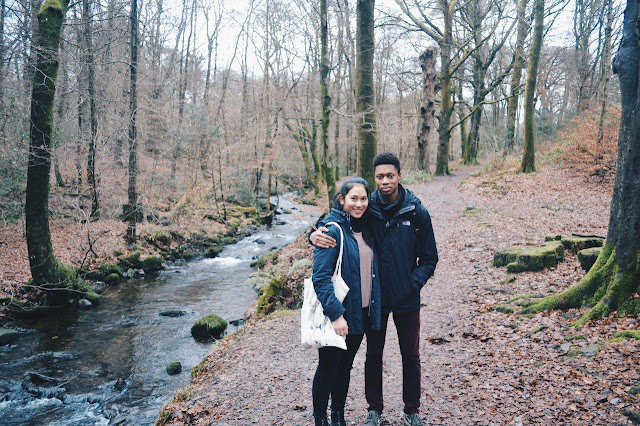 We then walked back to the visitor centre to enquire about renting bikes so we could explore windermere by cycling! 30 minutes later, we found ourselves next to the train station at Country Lanes Cycle Centre where we got a really good deal for our bikes

So, the guy was going to charge us £23 for one day (not even one day really because the sun sets at 4pm so you had to return it then), which we thought was ridiculous especially when there weren't many visitors at all during this time - Lake District is definitely more popular in the summer, and so we said we'd give it a thought and started walking away. But just as we were about to leave the centre, he offered us a deal - £30 for 2 days!! We took the offer (of course playing it really cool and being like ' oh yeah that sounds much better ' rather than 'OMG yes please that is amazing we can only afford that'), payed and off we went!

I am personally not a confident cyclist so I was a little scared on the inside, but I knew it would be such an adventurous and exciting experience so I had to do it! Topo was the assigned navigator - and was really good at it, and he led us to discover amazing routes :') 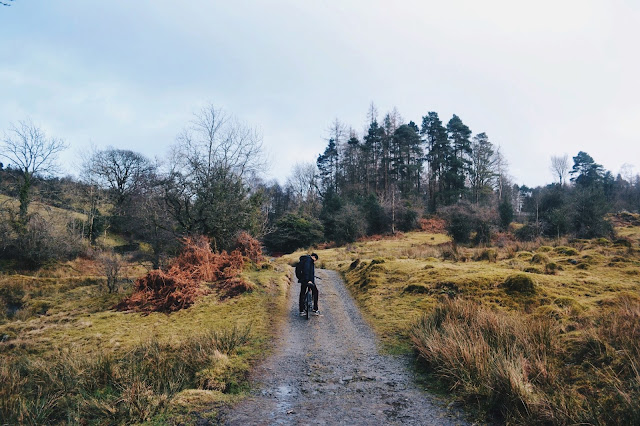 Look at this!!! Can you imagine cycling through endless woodlands and rolling hills whilst breathing in the clean & fresh air that has been very kindly provided by the trees?? (A cheeky yet powerful quote that I really like reads: If trees gave off wifi signals, we would be planting trees everywhere which could possibly save the planet. Too bad they only produce the oxygen that we breathe) Makes me so incredibly happy just looking back at these pictures :') 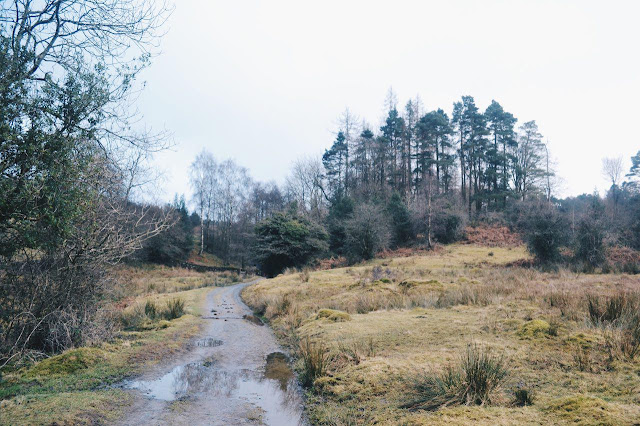 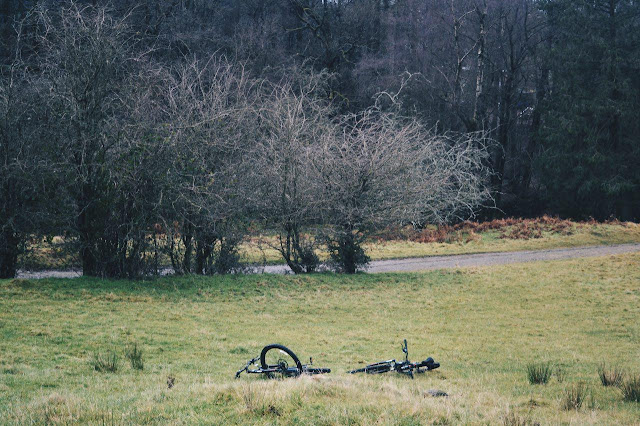 Our bikes! Which we left to check if there was a view beyond the tall hill that we saw but unfortunately not. What we did find, was our shoes completely covered in mud YAY 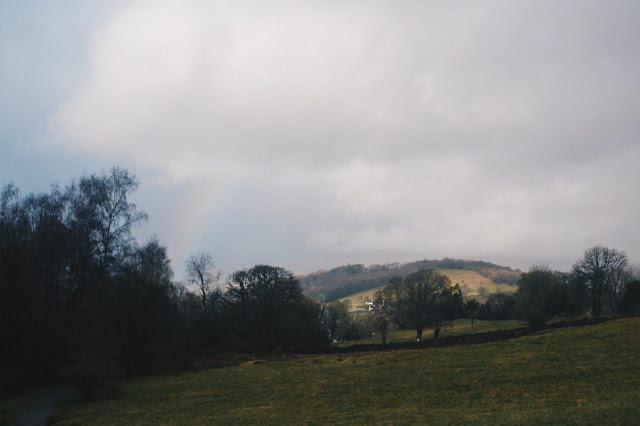 3rd rainbow!!! (Its really faint on the left of the picture) 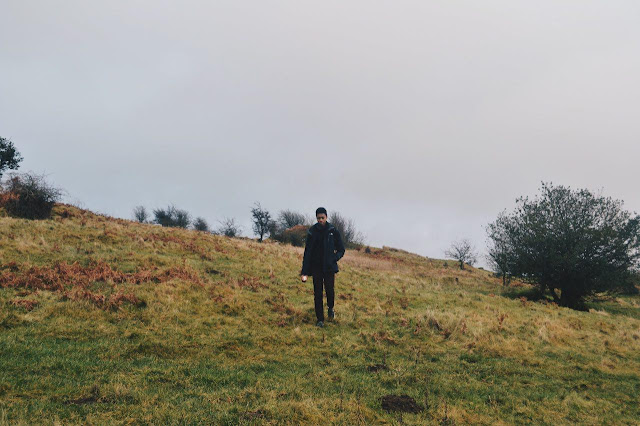 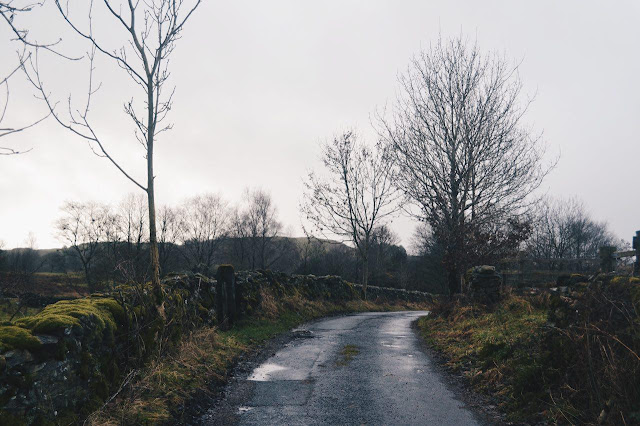 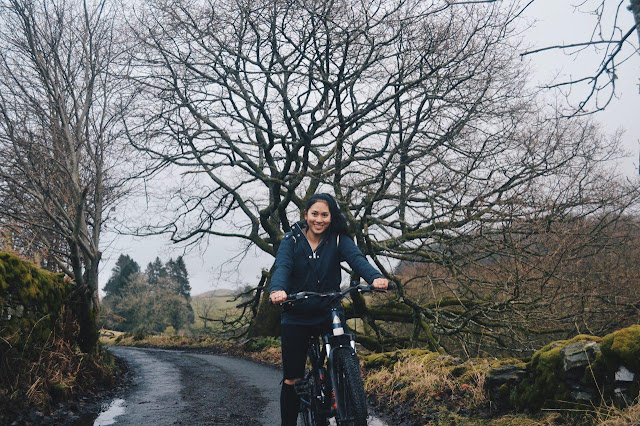 It was so incredibly refreshing to be cycling through such environments that seem untouched, other than the road that was built for cars, and I was just in awe the whole time and could not stop feeling so thankful for the fact that I get to travel and have experiences like this. 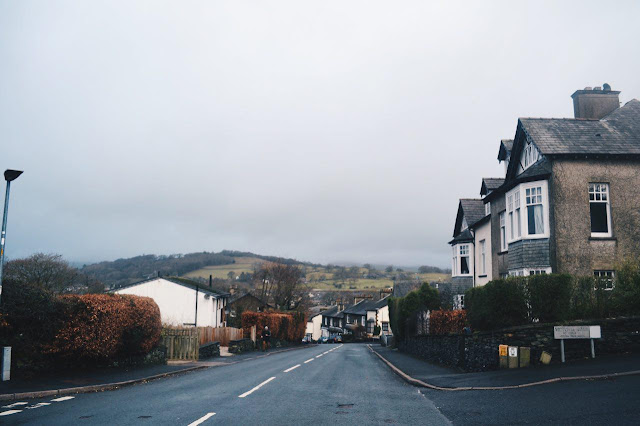 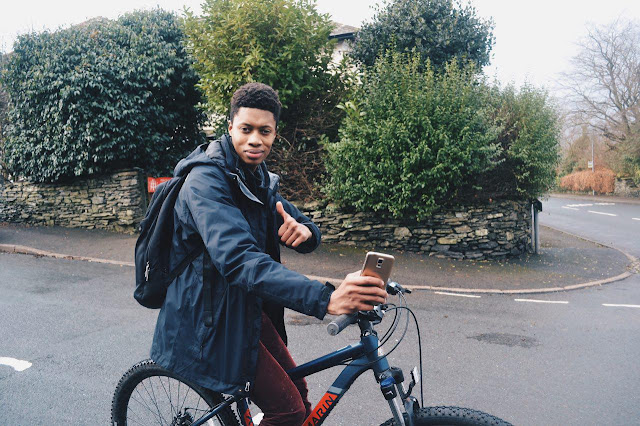 We were limited for choice with where to have lunch and went with Thai food at Jintana - and guess what, we had lunch here every single day because similarly to Busaba in Liverpool, the food in Jintana was A-M-A-Z-I-N-G and came in less than 10 minutes!! You can't get a better deal than that. Ok but the only difference was that there was no discount but it was definitely worth paying for quality food that came so shortly after ordering! Topo and I spent a good 10 minutes discussing how they could possibly prepare and cook the food so quickly but soon decided that there was no point trying to crack our brains on how, and to just accept it happily and be grateful that we found this gem.

After a scrumptious meal of a veggie pad thai (Topo's) and a red curry with tofu (mine), we continued our journey of exploration with the end destination of Orrest Head View point in mind, where we were told that we'd get a 360° view of Bowness if the sky was clear ☺ 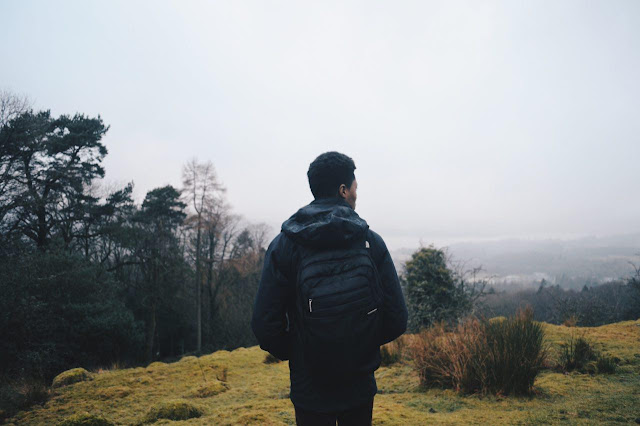 The ride up here was so tough - we were met with windy and very steep roads that resulted in us having to push our bikes up manually as cycling up would have been nearly impossible. It also did not help that it had started to drizzle which made everything a little less bearable but we made it!! I was properly sweating which felt really uncomfortable because if you've experienced sweating in the cold, you'd know that it feels so gross and frustrating to be feeling hot and warm on the inside, yet feel cold on the outside. 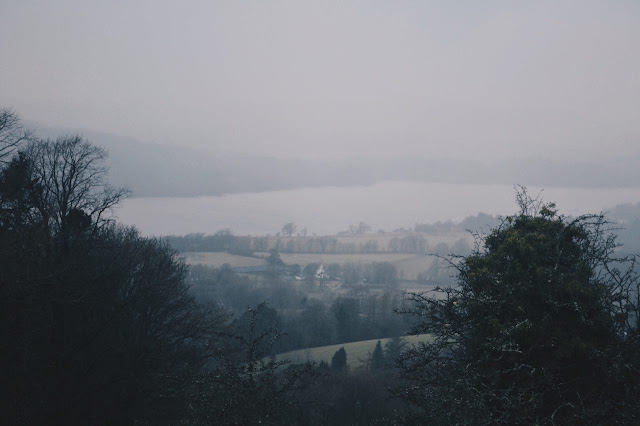 Unfortunately, clear skies that would have promised an amazing 360° view was replaced by intense fog and a gloomy atmosphere that just 'sat' above the town of Bowness. Nonetheless, the view was still rewarding and I believe that the gloominess and fogginess gave Bowness some character ☺

We then called it a day and headed back to Fell View where we had toast with jam and bananas for dinner whilst watching The Bucketlist Family on Youtube (which was recommended to me by Natascha and I now highly recommend anyone who sees this to check them out!! Their videos are really uplifting and their children are absolutely adorable!!).

There were a couple of times during our ride where we encountered steep, long and smooth downhill bits of road and during such encounters, Topo and I would relax our grips on the breaks (well Topo probably did it entirely whereas with a little fear in me, I had my hands clutched to the breaks just in case) and let gravity take control and bring us on an phenomenal sensation of wind through our hair and brushing past our faces - I felt almost weightless and it was just so amazing.